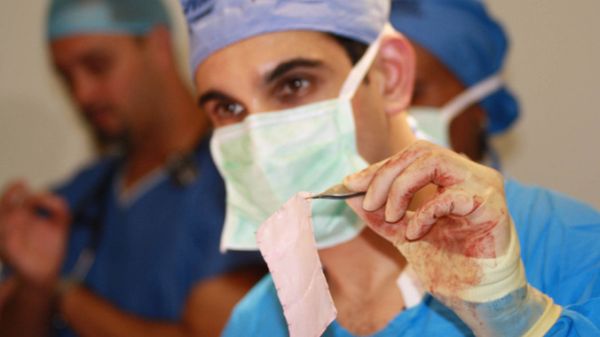 Dedicated, pioneering professionals are forging forward with – in some cases bizarre – measures and saving lives, taking innovative approaches to medical care. A neonatologist, a prosthetic and a plastic and reconstructive surgeon have totted up some extraordinary achievements.

These three doctors swore the Hippocratic Oath, one of the oldest binding documents in history. Its principles are held sacred by doctors to this day: treat the sick to the best of one’s ability, preserve patient privacy and teach the secrets of medicine to the next generation. It is evident the oath taken by these doctors has earned them great gratitude from those they have saved.

Baby Allegra in a bag

Allegra Lategan spent the first few weeks of her life in 2011 in a ziplock bag to protect her paper-thin skin from tearing against the sheets and to prevent heat loss from her fragile body. She was born at 22 weeks and weighed only 515 grams.

“We were lucky with Allegra in that we knew she would arrive early, so we had time to get an excellent team in place,” Dr Ricky Dippenaar, a neonatologist who works at Netcare’s Blaauwberg and N1 City Neonatal ICU in Cape Town told the Bulletin health journal. “The fact that she decided to arrive naturally and not by Caesarean section took us by surprise, but didn’t catch us off guard as everybody was ready and waiting. At one point there was such a large team of nurses, obstetricians and other specialists gathered around this minute baby that it was almost impossible to see her.

“The use of the humble ziplock bag is already taught in advanced neonatal life support classes as a makeshift mechanism to support premature babies from heat loss,” said Dippenaar, “but Allegra also needed a humid environment. Babies born so young have very immature skin and they lose a lot of fluids, and this can upset their electrolyte balance. You need an environment in which they can mature and grow gradually. While we were waiting for the Giraffe incubator to be flown down from Johannesburg, the plastic bag worked perfectly.”

For neonatologists, the Giraffe incubator was the Mercedes-Benz of incubators. “Not only does it provide 100% humidity, but it also has a built-in X-ray access tray and scale, which means vulnerable babies don’t have to be moved unnecessarily,” he explained. “It also has a specialised mattress that supports the premature babies while helping to minimise pressure sores.”

Medhold flew one down from Joburg for Allegra, but as a result of the publicity, Netcare had procured its own Giraffe and, despite the enormous costs, was in the process of getting more so other babies would also get the best start, he added.

True to the Hippocratic Oath and passing on knowledge, Dippenaar is able to pass on these incredible skills via a satellite neonatal training facility that has been set up at N1 City in conjunction with the University of Cape Town’s medical school.

Fox had a cancerous leg removed and Cape Town prosthetist duo Chin and Dave Herman of the Cape Amputee Clinic enabled her to walk again. Chin told the Bulletin: “It’s very exciting to see this level of technology in South Africa. The leg was unveiled only in 2011 at the American Orthotic Prosthetic Association’s conference in Las Vegas. Until recently, prototypes have been fitted only in a trial environment. For us it’s a great challenge and privilege to take this forward. Working with Annette has been incredible because she is so positive.”

He explained that the combination of motion and speed sensors and advanced computing meant that the Symbionic Leg could detect small changes in movement and direction. This made it better than other models at changing the rigidity of the knee and the positioning of the foot, providing better balance and stability. “The system’s electronic ‘brain’ uses advanced load sensor cells and angulometers [sensors that measure the angles of the joints] to analyse how the user walks,” Chin added.

“These ultra-sensitive sensors measure changes in the terrain to ensure motion that is as natural as possible. At the heart of the system is an advanced actuator: this uses magnetorheological [MR] fluid that varies the knee’s resistance throughout every step. The MR fluid contains miniscule iron particles and operates by having a magnetic field applied. This causes the iron particles to form chains, and resistance consequently increases – technology also used for shock absorbers by car manufacturers like Ferrari.”

It was like a scene from a horror film when firelighter gel exploded and little Pippie Kruger was engulfed in flames. Her father was lighting a fire to make a braai and the gel exploded. When she was admitted to hospital she had sustained 80% deep burns and her body was three to four times her usual body size from the swelling caused by the injury.

Six months after Pippie’s accident, she was the first person in South Africa to have radical cloned skin grafts, which were a success. Speaking to the media, Dr Ridwan Mia, her plastic and reconstructive surgeon, said: “From a professional perspective, for a two-and-a-half-year-old child to sustain such severe burns and survive, takes a massive team effort.”

Ria explained that cloned skin had been available in the United States since the 1970s but Pippie’s case was the first time Epicel, as it was called, was used in South Africa. “The technology that produces the cloned skin is incredible. The Genzyme laboratory is in Boston, and every aspect of the laboratory is so tightly controlled that it smacks of a science-fiction movie… A tiny portion of Pippie’s skin was sent over and they were able to grow sheets of it on a scaffolding of mouse cells that had been irradiated to remove every trace of mouse DNA. The radiation used is so powerful that the FBI audits the laboratory on a regular basis.”

Once enough sheets of skin were cultured, they were flown back to South Africa – another feat that highlighted just how capable South Africans were at getting the job done. “The cloned skin is viable for only 24 hours after leaving the lab,” Mia explained. “It was flown in, and when the flight landed at OR Tambo [International Airport, in Johannesburg], the cloned skin was escorted to the hospital during rush hour traffic. The usual hour’s journey took less than 16 minutes.” While details of the grafts made international news and tissue engineering entered a new era, Mia was quick to point out that he was not the man of the moment, but rather part of a team that contributed to the success of Pippie’s skin graft.

“We have the skills in South Africa to practise high-tech medicine. Tragically, our country also has a high incidence of burn patients, and a facility that could clone skin would be ideal. But the set-up costs are prohibitive. To date, only about 100 American patients have benefited from cloned skin.

“The face of medicine is changing rapidly and in a few years’ time, harvesting skin for grafts as we do now is probably going to be regarded as barbaric. Tissue engineering is the way of the future,” Mia concluded.