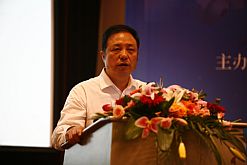 Chinese minister of science and technology
Xu Guanhua, says China will establish 40
data centres by the end of 2010.
(Image: Center for Earth Observation and
Digital Earth)

South Africa is at the forefront of an endeavour to beef up the African continent’s data collecting and storing capabilities. This was announced at the annual conference of the Committee on Data for Science and Technology (Codata) in Cape Town towards the end of 2010.

At the conference delegates were treated to a preview of the prototype of the World Data Centre on Biodiversity and Human Health in Africa, set to be opened in 2011 in South Africa.

The importance of the centre

The centre will focus on topics such as geomagnetism (the earth’s magnetism), astronomy, and solar activity. It will allow researchers to understand how environmental trends relate to one another, such as climate change and malaria for example, by compiling data on such topics.

Scientific data on Africa is currently dispersed mainly in countries off the continent, but the new centre aims to bring all this data together into a single resource that will be accessible online.

Because data collection and management is still under-developed on the continent, policies to protect information have not yet been conceived and implemented.

Daisy Selematsela, executive director of the Knowledge Management and Evaluation Directorate at the National Research Foundation in Pretoria, said that the lack of such policies has resulted in a fear of how the data will be used.

“This is one of the things we need to look into,” she said. “There is a tendency to control access to data, perhaps because of concerns over its mis-interpretation or because data is power.”

The centre will be on par with over 50 other data centres around the world, most of which are located in East Asia, Europe and the US.

Data expert Wim Hugo of the South African Environmental Observation Network is confident that the centre will help researchers identify gaps in existing data, and give them historical data to compare to new findings. Hugo is an advocate of the new centre.

With South Africa spearheading this initiative, there has already been collaboration between SA and Nasa in the US. The space agency sent more than 30 terabytes of free earth science satellite data to local researchers for them to use in environmental applications, and to support sustainable development.

However, Unesco’s head of science policy Lidia Brito, speaking at the conference, cautioned that Africa’s challenge lies in being able to manage and interpret these increasing amounts of data.

“We need to have the eyes to look beyond the data,” added Brito.

The centre’s operations will initially depend on data sets currently hosted in South Africa and the US, while African organisations will be encouraged to contribute their own data as it becomes available.

The Committee on Data for Science and Technology

Part of the International Council for Science, Codata was established in 1966 in an effort to improve the accessibility of scientifically important data, as well as its quality, reliability and management.

This resource provides scientists and engineers with access to international data activities, keeps them abreast of new international knowledge, and allows for direct cooperation.

A major driving force in the establishment of Codata was the fact that the efficient management of scientific data was beyond the scope of a few dedicated individuals.

Data sharing in the world

China will provide over 80% of its data relating to research into pure science such as theoretical mathematics, physics and chemistry, making the knowledge freely available on the internet.

Chinese minister of science and technology Xu Guanhua, said that to achieve this goal, China will establish 40 data centres by the end of 2010.

”They will cover 300 databases relating to the environment, agriculture, human health, pure science, engineering and regional scientific and technology information,” he said.

“All of them will be openly accessed through a public portal initiated by the Ministry of Science and Technology in China,” Xu added.

A UN and World Bank report released in November 2010 has revealed that humanitarian disasters caused by natural forces such as earthquakes and floods could in some cases be averted through global collection and sharing of hazard data.

This would help to build up an international picture of risks to help make more sophisticated predictions on a local level, it reported.

“Few countries collect data on hazards. Data on where past hazards have struck, frequency, intensity, and even data that is collected is not made accessible,” said Apurva Sanghi, a senior economist at the World Bank.

“A lack of basic information means donor agencies that want to lessen the impact of, say, drought can’t make optimal decisions,” he said.