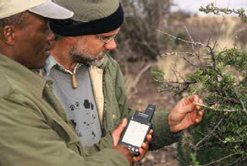 Louis Liebenberg and a colleague using
the CyberTracker to record evidence of
an animal’s passage through the bush.
(Image: CyberTracker) 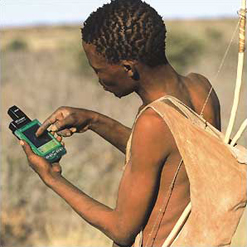 Good ideas take on a life of their own, soon spawning a host of others. That’s what happened to South African Louis Liebenberg’s CyberTracker – a remarkable combination of 21st century technology and hunter-gatherer bushcraft.

An anthropologist, Liebenberg spent years roaming the harsh Kalahari Desert with San Bushman hunter gatherers, learning to track wildlife, and became friends with the Xö community from Lone Tree. Chatting round the campfire one night, some of the older hunters said they were worried about the younger generation. They could no longer survive by hunting and gathering and needed jobs. But they had no marketable skills. The only thing they could do – and do really well – was tracking. But they were totally illiterate, so they had no way of selling that skill.

So Liebenberg teamed up with Justin Steventon, an IT student at the University of Cape Town. Together they developed an icon-based, hand-held electronic device that enabled trackers to accurately record the nature and position of their findings. The original CyberTracker was based on the Apple Newton, grafted onto a GPS so that observations could be recorded while the exact location and time was automatically attached to each piece of data. The data, once downloaded onto a desktop, could be analysed in a number of ways.

A range of uses

While CyberTracker was initially developed only to allow trackers to gain recognition for their skills and knowledge, and to collate the results of their observations and interpretations, the system has been used for a number of other purposes. It has proved invaluable in wildlife management, disaster relief, crime prevention, farming and environmental management both in South Africa and abroad.

The real test of the system was a programme of tracking the endangered black rhino in the Karoo National Park near Beaufort West, about 500km from Cape Town. Most of the data were collected by two trackers employed by the park – Karel Benadie and James Minye.

In the past, researchers who had used trackers to gather data had considered them merely field assistants – and had worked on the principle that the trackers had just “collected” data. Liebenberg realised that the data – the tracks and signs – were lying out there in the field, and what the trackers provided were not raw data. They were results. The trackers were interpreting the data so that they could be further manipulated. For this reason, he named both trackers as co-authors on the paper they published in the journal Pachyderm. This was proof of Liebenberg’s major thesis – that non-literate trackers can do science.

The CyberTracker has produced a number of unexpected advantages. Karel Benadie says it helped him to improve his tracking skills in two ways. First, because he was recording everything he saw, he paid attention to small signs he may have previously ignored. Second, he was inspired to accurately record everything, as he knew his children would one day be able to see his work.

And he says it also helped him learn to read. The CyberTracker is icon-based, but the name of the animal is displayed next to the icon on the screen. So, as Benadie clicks on the icon for, for example, a rhino, he also reads the word “rhino” next to it. Think back to how you learned to read: a nice, big colourful book with a picture of a cat and the word c-a-t printed out underneath it.

That was just the first step in the process of creating recognition for professional trackers. If trackers were to find jobs in the public and private sectors, they would need to have some kind of certification, and so the CyberTracker Tracker Evaluation System was born.

Offering three basic levels of certification and three advanced levels, it is the standard evaluation system for all Field Guide Association of South Africa tracking qualifications, and it is recognised by the South African Qualifications Authority. So trackers can now earn a formal qualification, even if they can’t read or write. And they can use this qualification to get jobs in wildlife conservation and nature reserve guiding.

Taking CyberTracker to the world

In 1998, Liebenberg gave a talk at the annual symposium of the International Society of Professional Trackers in the US. In that country, unlike South Africa, tracking is considered a hobby. It’s something people do instead of golf or bowling, and it consists mostly of track and sign identification, rather than trailing.

The difference is important. Identifying track and sign is a useful skill but it is rather static. Trailing, on the other hand, is the art of following a trail through difficult terrain. It necessitates knowledge of track and sign, but also requires a host of other skills.

After the symposium, Liebenberg went on a wolf tracking expedition on which he met Mark Elbroch, a zoologist. Elbroch was acutely aware that, in the US, there was no way to assess the credibility of track and sign data that was used for academic research. What this meant was that a vast number of doctorates and masters degrees may have been awarded for research based on rather dodgy data. So it was essential that all academics who wanted to use the results of tracking as data for their research had to be qualified trackers – or at least track and sign specialists.

Recognising that the CyberTracker system fulfilled all the necessary criteria, and being loath to reinvent the wheel, Elbroch visited South Africa three times over a period of two years, after which he became the first US citizen to qualify as a tracker. Since then the CyberTracker system has become the norm in the US, where Elbroch is the only qualified CyberTracker evaluator. There are another two qualified Track and Sign evaluators, who can test potential trackers on their ability to identify tracks and signs but not on their trailing skills.

So that’s why Adriaan Louw, one of only seven senior tracker evaluators in the world, travels from South Africa to the US regularly to run courses and do evaluations. He will be spending four weeks in that country between late September and late October, running tracking courses on both coasts and at a few venues in between.