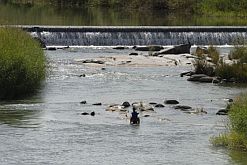 The Council for Scientific and Industrial Research will feature prominently at the World Water Forum in Istanbul this month, with a number of the organisation’s groundbreaking research projects going on show. Top South African water scientists will also take part in discussions and presentations.

CSIR group executive Khungeka Njobe is excited about the organisation’s participation in the fifth edition of the World Water Forum (WWF5), particularly as South Africa is on the shortlist to host the next event.

“South Africa is competing against France and Canada to host WWF6 in 2012,” she said. “We will be using this opportunity to share with the global water community our progressive legislative and policy framework and world-class research. The Department of Water Affairs is leading the bid process, but the CSIR has a critical role to play in demonstrating the country’s leadership in water research.”

The host for 2012 will be announced during the forthcoming session. Should South Africa be awarded the sixth World Water Forum, it will be a major coup for the southern hemisphere, which has never had the chance to host the event. The country’s bid is centred on Durban, which has the infrastructure and facilities to host an event of this magnitude.

The 2012 World Water Forum in South Africa will mean that water problems relevant to sub-Saharan Africa will come under the global spotlight, and that the Southern African Development Community region will be placed on the global water map. The event will give Africa the chance to become a valued contributor to the water-related issues of the world, rather than merely a recipient of donor aid and professional advice.

CSIR projects on display at the Forum include acid mine drainage methodologies, human health projects, rural service delivery, and programmes focusing on water for growth and development. Many of these projects fall under the CSIR Built Environment and CSIR Natural Resources and the Environment sectors.

CSIR representatives at WWF5 include engineer Dr Kevin Wall, CSIR water resources manager Marius Claassen and researcher Renias Dube. Wall is also scheduled to present a paper on South Africa’s strategy for water services asset management, and the three scientists will assist Minister of Water Affairs and Forestry Lindiwe Hendricks during the week-long event. Hendricks will host a round table involving her ministerial counterparts from around the world.

The Department of Water Affairs and Forestry’s Water for Growth and Development programme, one of the projects on show in Istanbul, is in the running for the King Hassan II Great World Water Prize, one of three prestigious water-related awards up for grabs.

The other two awards are the Turkish Republic Prime Minister’s Water Prize, and the Kyoto World Water Grand Prize.

The King Hassan prize, worth R1-million (US$100 000), is for individuals or organisations that have made outstanding contributions in various aspects of water resources, whether scientific, economic, technical, environmental, social, institutional, cultural or political.

The Kyoto prize is worth R280 000 ($28 000) and acknowledges grassroots-level activities that work towards addressing critical water needs of communities and regions. The Turkish Republic Prime Minister’s Water Prize is for journalistic excellence in the coverage of water issues. A prize of R264 000 (€20 000) each will be awarded to two journalists.

According to the World Water Council, 1.1-billion people around the world live without clean drinking water, and 2.6-billion people lack adequate sanitation. Poor access to safe water increases child mortality by up to 20 times, and in areas not served by usable water 3 900 children die every day from water-borne diseases.

The World Water Forum is the largest water-related event in the world and aims to facilitate global collaboration on these critical water problems. The forum is organised by the World Water Council and takes place every three years, providing an ideal platform for policy-makers from all over the world to press for greater political commitment to and higher priority for water management strategies.

The 2009 forum takes place in March in Istanbul, Turkey, after successful events in Mexico (2006), Kyoto (2003), The Hague (2000), and Marrakech (1997). This year’s theme is “Bridging Divides for Water” and is a reference to the location – Istanbul stands at the cross-roads of Europe, Asia, Middle-East and Africa – as well as the intent of providing a bridge between the developed and developing worlds.