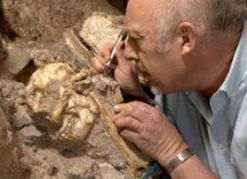 Dr Ron Clarke pores over the skull of Little Foot, embedded in rock in the Sterkfontein Caves. 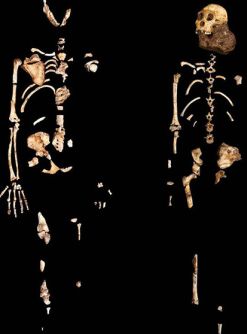 The two A. sebida skeletons found in the Cradle of Humankind, one a child, the other an adult.

The reconstructed A. sebida skeleton of the child.
(Images: Wits University)

Not only has the Cradle of Humankind provided rich heritage of humankind’s origins, but it recently gave the world a new hominin species, the two-million-year-old Australopithecus sebida.

It was here, at the Sterkfontein Caves in 1947, that scientist Robert Broom found a hominin fossil skull that he named Mrs Ples, dating from about 2.8- to 2.6 million years ago. In 1994, bones of another specimen, dating back about 3.3 million years, was discovered in a box at the caves, and called Little Foot. The almost complete skeleton of Little Foot was then discovered in the caves, which are being painstakingly excavated.

The area is a typical bushveld scene – long grass, scattered shrubs and trees, rolling koppies – but its ordinariness belies its importance to the palaeontology world.

The A. sebida find was made in 2008 but revealed to the world in 2010 by professors Lee Berger and Paul Dirks. Berger is a palaeoanthropologist at the Evolutionary Studies Institute at Wits University, and Dirks is a geologist, based at the James Cooke University in Australia. Berger led the team of scientists from across the globe on the excavation.

Fragments of two skeletons were found, one a child, the other an adult. Estimates are that the child skeleton is of a boy between 11 and 13 years old, and an adult female in her late 20s or early 30s. Many more fossils are believed to be hidden in the cave into which they are believed to have fallen. “There are more hominin fossils than I have discovered in my entire career,” said Berger, when the announcement was made in 2010.

Sediba is Sotho for “well” or “spring”, and the discovery was so named because it is hoped that “a great source of information will spring from the fossils”. The particular site has been named Malapa.

“The site where the fossils were discovered is technically the infill of a de-roofed cave that was about 30 to 50 metres underground just under two million years ago,” explained Berger. “The individuals appear to have fallen, along with other animals, into a deep cave, landing up on the floor for a few days or weeks. The bodies were then washed into an underground lake or pool probably pushed there by a large rainstorm. They did not travel far, maybe a few metres, where they were solidified into the rock, as if thrown into quick setting concrete. Over the past two million years the land has eroded to expose the fossil bearing sediments.”

It is believed that A. sebida is a good candidate for being the transitional species between the southern African ape-man Australopithecus africanus (like the Taung Child and Mrs Ples) and either Homo habilis or even a direct ancestor of Homo erectus (like Turkana Boy, Java Man or Peking Man). The australopithecines are believed to be the ancestors of the Homo genus.

There is no doubt, confirms Berger, that the new find is a new species, but not in the Homo genus. “There is broad acceptance of the species A. sediba among scientists as something previously unknown to science. Very little debate has occurred around whether these bones represent a new species. The debate has centred, largely, [on] whether the species should be placed in the genus Homo.”

The new species has long arms, like an ape, and short powerful hands, making it likely that it could have retained its ability to climb. A very advanced pelvis and long legs suggest that it was capable of striding and possibly running like a human. It is estimated that they were both about 1.27 metres tall, although the child would certainly have grown taller. The female probably weighed about 33 kilograms and the child about 27 kilograms at the time of its death.

In September 2011, the almost complete hand skeleton of A. sediba, together with the brain, hip, foot and ankle, was unveiled to the public. The hand, which is very evolved, with a long thumb, like a human’s but long arms like an ape, indicate that A. sediba was bipedal but was also able to climb. The hand also suggests that A. sediba was capable of tool manufacture and use.

A. sediba had a foot that was adapted to bipedal locomotion, without a grasping, divergent big toe needed for climbing. While it’s clear it was a terrestrial biped, it’s possible that it still regularly climbed trees to forage for fruits or other food items that could only be found there, as well as used trees to escape predators, or as a sleeping place safe from predators. The world A. sediba would have lived in would have been a mix of open savannah grassland and forest.

The brain size of the juvenile was between 420 and 450 cubic centimetres, which is small when compared to the human brain of about 1 200 to 1 600 cubic centimetres, but its shape seems to be more advanced than that of australopithecines. But what makes the find special is that a complete clavicle or collar bone, a nearly complete scapula or shoulder blade, and a complete humerus or upper arm bone, and radius and ulna or forearm bones have been found.

Berger and Dirks assembled an international team of scientists, in all around a dozen people, although some 60 scientists from around the world have been involved in the unravelling of the discovery. The first step was to do a geological study, to help determine the age of the fossils. Other means of dating the fossils have been used: assessing the uranium lead components in the rock; establishing the magnetic signals in the rock, which change over time; and dating the rate of erosion of the site.

An exciting aspect of the find is that more than bone has been preserved at the site. “The preservation at Malapa is excellent and there are certainly organic remains preserved like plant remains. There are some indications that even the soft tissues of animals are preserved, including possibly skin,” said Berger.

The Sterkfontein Valley consists of about 40 different fossil sites, 13 of which have been excavated so far. It includes Bolt’s Farm, where the remains of three sabre-tooth cats were found in a pit that trapped animals; Swartkrans, where the earliest known deliberate use of fire was made, around 1.3 million years ago; Haasgat, where the fossils of early forest-dwelling monkeys, of about 1.3 million years old, were found; and Gondolin, where 90 000 fossil specimens have been found since 1979.

As a World Heritage Site any finds belong to the world, although it is on privately owned land, and of course, the area is strictly controlled and protected.

In the late 1890s, miners dynamited the Sterkfontein Caves, searching for limestone which they converted into quick lime, an element needed for the processing of gold and the manufacture of cement. They displaced the sediment and revealed entrances to the caves. The rocks contain cyclindrical shapes – evidence of early life called stromatolite, dating back 3.8 billion years. These organisms breathed in carbon dioxide and breathed out oxygen, thus increasing the Earth’s oxygen levels and leading to the evolution of other forms of life.

Some 2.5 billion years ago, the area was a shallow lake. Over time it evaporated and formed dolomite, in which the stromatolite are visible. Around 2 billion years ago, a large meteorite, 10 kilometres in diameter, fell in Vredefort, 100 kilometres south of Sterkfontein, leaving a crater shape now known as the Vredefort Dome. The entire area was covered in debris, which helped preserve the gold reefs of the Witwatersrand, preventing them from being eroded. The debris also halted erosion in the broader area, hence the stromatolite rocks.

Openings to the caves that are visible today started appearing about 3.5 million years ago, and may have been occupied by sabre-toothed cats and other predators, which would explain the remains of animals such as wildebeest, extinct zebra and buffalo, whose bones have been found in the caves. One of the caves, Plover’s Lake Cave, has been explored down 50 metres, but it has a labyrinth of unexplored passages and several entrances. Excavations of the cave and others is ongoing.

The nearby Wonder Cave has an enormous chamber with beautiful 15m high stalactite formations. It is believed to be 2.2 million years old, and bones of rodents, frogs, lizards and birds have been found.

Maropeng is the visitor and interpretation centre that complements the Sterkfontein Caves site in the cradle, some 10 kilometres north-west of the caves. Visitors are able to explore, by means of zones, the history of Earth and humankind. It is positioned up the side of a koppie, where ancient rocky outcrops mark the setting of a huge burial mound, referred to as a “tumulus”, a grassy mound 20m in height and 35m in diameter, in a teardrop shape.

The site is visible from the road, with seven tall concrete pillars representing the seven daughters of Eve. Once in the tumulus, an exploration involving a boat ride on an underground lake examines the different forms of water. From there, the visitor takes a walk down an underground spine, learning through interactive displays about the discovery of fire, bipedalism, extinction, and DNA, among many other aspects of human evolution.

Maropeng means “returning to the place of origin” in Setswana, the language spoken in the region. It is difficult, while walking around, to fully comprehend the age of the sites and the importance of the finds. Charles Darwin predicted in the 19th century that the origins of humankind would be traced back to Africa because of the existence of primates on the continent. The cradle is certainly the birthplace of humanity.