An Intel programme called She Will Connect aims to increase women’s access to the digital world. Research has shown there is a significant gender gap in developing countries in using technology such as the web. It’ll help to empower women in their businesses, increase literacy, and strengthen their voice. 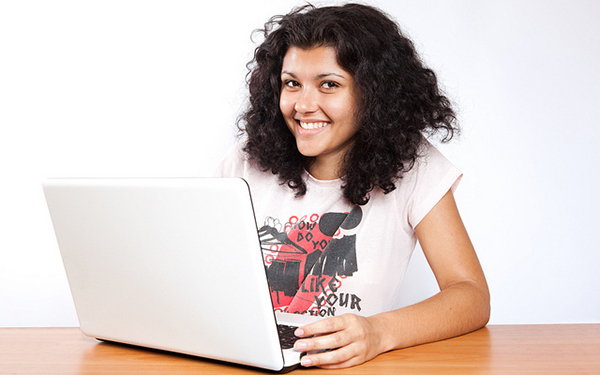 The Intel She Will Connect programme aims to empower women through ICT and close the gender gap when it comes to accessing technology. (Image: CollegeDegrees360, CC BY-SA 2.0, via Flickr)

“I still cannot believe that I now use the computer and even the internet,” said Nigerian businesswomen and hairdresser Jessica Orji. She always thought the internet was more for the guys and online scammers.

Through the web, she has learnt she can reach a wider client base for her business. “Now I love the computer,” she said. “With the internet, I can reach more people. I can advertise my business online through my new Facebook account, and even create fliers for my business.

“I can also make a budget to plan my finances.”

Orji took part in the Intel She Will Connect: My Digital Journey programme. It is an initiative to provide a learning platform for women online.

By being digitally savvy, women have a greater chance of increasing their income, receiving a better education, enhancing their political participation and having a stronger voice in their communities.

“As a result of the training, for the first time, I went to the café to browse the Internet,” Orji said. “The training completely changed my perception of computers and [the] internet.”

What the United Nation says

The United Nations (UN) has welcomed the project.

“Equality in access to the internet is a matter of human rights, women’s economic empowerment and poverty reduction,” said UN Women executive director, Phumzile Mlambo-Ngcuka. “We are very pleased to be collaborating with Intel, Kenya, Nigeria and South Africa to connect young women to the internet because equality for women is progress for all.” 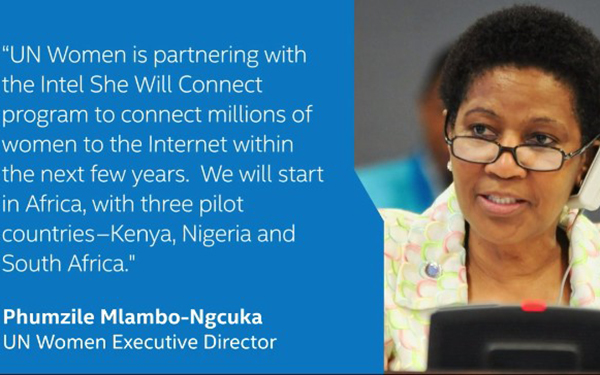 “She Will Connect is going to be hugely transformational (for) women, families and communities and is crucial for sustainable development,” said ambassador Macharia Kamau of Kenya. His country was proud to be a part of it.

Deputy ambassador Usman Sarki welcomed the project into Nigeria. “Providing access to technology and reducing costs are key to empowering women in the internet age.”

South Africa was committed to expanding ICT access, said the South African deputy ambassador, Doctor Mashabane. “She Will Connect is a concrete and practical initiative to roll out internet access to young women for national development.”

The programme ties in to accomplishing South Africa’s National Development goal of obtaining a skilled workforce to support inclusive economic growth by 2030.

What the stats show

Intel’s She Will Connect was established after research was done into internet access across the world. The ensuing report, called Women and the Web showed that “on average across the developing world, nearly 25% fewer women than men have access to the internet, and the gender gap soars to nearly 45% in regions like sub-Saharan Africa”.

It estimated that without intervention, the internet gender gap could increase to 350 million women in three years’ time.

“The research is clear and the call to action has been made,” said Melanne Verveer, former ambassador-at-large for Global Women’s Issues in the US Department of State. “Now is the time for collaboration to actively reduce the internet gender gap and empower women around the world to enrich their lives.”

Another report, from the Broadband Commission Working Group on Broadband and Gender, established by the International Telecommunications Union (ITU), examined the role that information and communication technologies (ICTs) and the internet could play in advancing gender equality agendas, including equal access to new technologies for women and girls.

The report revealed that, around the world, women were coming online later and more slowly than men and highlighted that in developing countries, every 10% increase in access to broadband translated to a 1.38% growth in gross domestic product. That meant that bringing an additional 600 million women and girls online could boost global gross domestic product by as much as $18-billion (R277-billion). 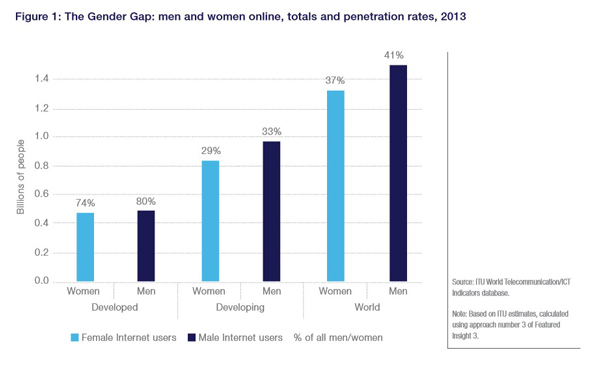 To read the Women and the Web report, click here.

Nigerian poet and actress Titilope Sonuga is the spokesperson for Intel She Will Connect in Nigeria. She recalled how she was about five years old when her father bought their first computer. Back then, it was used for homework. She loved to use software that taught people how to type, which helped her to gain and hone that skill.

“It’s interesting to think about the seeds that were planted from a young age and what that tells a girl and what her life can become. I know that a lot of opportunities that I have come across now happened on Twitter and Facebook and Instagram and because I am plugged into this global network I am able to access those opportunities,” Sonuga said.

She said the programme would help women to push boundaries to be whatever they wanted to be, whether it was an engineer, poet, doctor or actress.

“To think about girls or women who don’t have access to training to be connected to technology is heart-breaking because to realise your dreams, you need to be plugged into the world around you.

“And so to think about the girls and women to benefit from this programme is incredible and it’s exciting to think about different voices that are going to be actualised because of being able to connect.”

See more of her interview here:

Women share their testimonials of how the internet has helped to improve their lives. (Image: Intel She Will Connect)

Orji is also spreading her knowledge about computers and the internet, and has used it to help her mother, a caterer, with her business.

“We went to the café to make fliers for her business, showing a proper and clear description of her full catering services,” Orji said. “She has gotten some new customers through those fliers. We are hoping we will be able to get a personal computer at home, as the entire family is excited about this new discovery.”