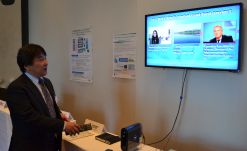 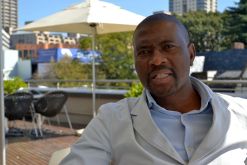 Director of ICT trade and investment at DOC, Simon Qobo, said the government is working to bridge the standardisation gap.
(Image: Shamin Chibba) 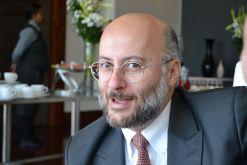 In the near future, South Africans may consult their medical doctors through their television sets at home, by using an internet-based technology called Internet Protocol Television (IPTV), says International Telecommunication Union (ITU) co-ordinator, Masahito Kawamori, who was in Johannesburg for the IPTV Conference.

More than 40 stakeholders from eight countries gathered at the Radisson Blu Hotel in Sandton, Johannesburg on 7 and 8 May for the conference, which was hosted by ITU, a specialised UN unit for information and communications technology (ITC) that sets the standards for IPTV. Kawamori, who co-ordinates IPTV’s global standards initiative, said attendees looked at how the technology could be used for entertainment, digital signage for advertising and public information distribution, and ehealth services. They also participated in setting up global standards for the technology.

According to Simão Campos, ITU’s counsellor for study groups, IPTV provides high-definition quality streaming video. It also incorporates interactive entertainment, which allows users to manage their programming. “Today, you are stuck with what the service providers will let you watch. But with IPTV you can find services from anywhere in the world,” he explained.

Kawamori said IPTV was channelled through a set-top box, a small device that received signals from a service provider and converted these into content that could be displayed on a television monitor. Unlike decoders, which were dedicated to one broadcaster, standardised IPTV set-top boxes could channel several service providers.

IPTV’s potential for success lay in its ease of use and familiarity. “Some people might not know how to use computers and mobile phones but they are familiar with television and its remote control,” he pointed out.

Campos said IPTV’s back channel allowed consumers and businesses to interact with each other. Users could use their television to shop for products they had seen on their favourite television programme. “If you are watching football and you like the [boots] of a player, you can point to it with your remote control and shop for it,” he said.

It could also be integrated with a number of external devices such as smartphones and tablets. “Multi-device interaction allows the user to integrate the iPhone or iPad with IPTV. The user can then access information on their device that is related to a television programme.”

He said IPTV was more than just a medium for entertainment; it could also broadcast and store vital data related to ehealth and public information.

Perhaps IPTV’s most meaningful role will come from its ehealth application. It can integrate home-based health care devices, which measure blood pressure, pulse rates and glucose levels, and can provide tips on weight loss. More importantly, this information can be captured on IPTV and stored on a cloud. Users can access this data and share it with their doctors.

But Campos said the health care industry had been slow on the uptake. “Doctors and health care workers have a way of working and they are not receptive to ICTs,” he said.

However, Kawamori believes that since most people are familiar with television, doctors will soon turn to IPTV for telemedicine. “If you can provide important information on IPTV with the help of a remote control and some interactivity, it will be good for helping and monitoring people. This will assist doctors as well.”

Digital signage is another feature of IPTV, which is meant to display information to the public. Businesses in Japan and China are already using it for advertising. It will also allow companies to conduct market research by assessing which products attract passers-by.

However, Campos said digital signage took on a new purpose in Japan after the devastating Tōhoku earthquake and tsunami – which led to the Fukushima nuclear disaster – in 2011. The technology was being used to broadcast possible disasters and public service issues such as traffic congestion.

Kawamori pointed out that Fukushima made the Japanese realise an emergency system could only work if it was used regularly. And since digital signage was used every day, people would pay attention to it. Therefore, they would be easily informed of emergencies. “If we have an emergency system that is not used on an everyday basis, then it would not work in an emergency situation. But with digital signage, we can use it on a daily basis. Now people can go to a public place to find information,” he said.

Differences between IPTV and internet TV

According to Campos, IPTV is broadcast through the same connection as the internet. But there are several differences between internet TV and IPTV. The former is not fully managed and channels are streamed using unicast technologies. Internet TV is also mostly online, making it difficult to manage customers.

“If you want to watch YouTube it will freeze because there is not enough bandwidth. It is what we call an unmanaged network. If you want streaming to be steady and without interruptions, you have to manage it,” Campos explained.

IPTV was managed by dedicated service providers that streamed video using multicast technologies. The delivery of content was also specific to the set-top box. “In principle the user can programme IPTV for their needs, but only to an extent so as to avoid abuse,” he added.

The IPTV codec in use is called H.264, which provides high-definition interactive services. But for South Africans, Campos said bandwidth would be a problem. IPTV needs a minimum five megabytes per second connection. A codec is a device or computer program that can encode or decode a digital data stream or signal. The term is a melding of coder-decoder.

But Kawamori said the improved H.265 codec had been developed and would be introduced in the near future. It would cut the minimum requirements in half while still delivering a high quality picture. It would give more South Africans access to IPTV.

Simon Qobo, the director of ICT trade and investment in the national Department of Communication, said the South African government was looking to close what ITU called the standardisation gap between developed and developing countries.

If South Africa did not participate in this process, he said, implementing IPTV would be very costly. Licensing would be expensive as South Africa did not produce its own hardware technology. But his department and the Council for Scientific and Industrial Research (CSIR) were conducting research to address the gap.

“We can try to integrate the technical findings from the research into the standard setting process,” he said, adding that the government was working to roll out faster broadband technology.

Kawamori stressed that developing countries like South Africa did not have enough bandwidth to run IPTV, but said they would not be overlooked. “This is the reason we are here. We are talking with the CSIR so we can start something like a 30 kilobyte broadcast for mobile devices.”

Silas Phoshoko, Icasa’s ICT analyst, said IPTV would be classified as a broadcaster despite it being an interactive technology. Phoshoko and a team of researchers had written a position paper analysing how IPTV worked. “All interactive technologies that are not unidirectional are classified under communication. But IPTV still needs a broadcasting licence because it is still unidirectional.”

Though Phoshoko admitted that South Africa lacked the capability to support IPTV, he said the increasing competition between telecommunication companies that laid fibre optics would help to increase capacity and reduce the cost of IPTV.