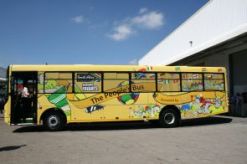 The city of Cape Town monitors sea levels and has begun education and awareness programmes highlighting the effects of raised ocean levels. In Johannesburg, the city is implementing a programme to harness the methane produced in landfills as a green energy source.

Both municipalities are also improving their mass transit systems. They have identified traffic congestion and its contribution to carbon emissions as one area in which they can make inroads to help prevent climate change in the medium term.

These initiatives and other green programmes have put the cities in the running to be named the Global Earth Hour Capital. The WWF Earth Hour Challenge highlights and rewards municipalities that have enacted substantial and long-term programmes to combat climate change. Of the six South African cities eligible to participate – Johannesburg, Cape Town, eThekwini, Tshwane, Buffalo City and Nelson Mandela Bay – the first three have uploaded data on carbonn Cities Climate Registry (cCCR).

Morné du Plessis, the chief executive of WWF-SA, the South African branch of the World Wildlife Fund, says that South African municipalities understand the need to plan and work towards a low carbon future. “Every disclosure of carbon emissions is an achievement, every project is a ray of hope, every reduction is a celebration and every entry to the challenge is a bold step towards a better present and brighter future,” he said in September.

The cities have till 14 October to report their urban development plans designed to improve living standards and make their city greener. These policies will be evaluated by an international jury and the winner will be announced in March 2014.

When eThekwini hosted COP17 in 2012, it joined 850 communities in 65 countries by developing a Green Map, the most high-profile and interactive of the municipalities’ programmes. It has also been the most active South African municipality in terms of registering its greenhouse gas emissions and reporting its adaptation and mitigation plans. But Derek Morgan, the head of the city’s energy unit, stresses that being named Global Earth Hour Capital is not the motivation behind the city’s participation. “We are at a point where we simply must do everything we can to slow down global warming. Change can happen most effectively at a local level.”

The WWF has put cities at the forefront of attempts to combat climate change for two reasons: firstly, they are responsible for 70% of greenhouse gas emissions; and secondly, it’s easier for municipalities than governments to make concrete policy that will help to halt the effects of climate change. In a report released at the end of September 2013, scientists on the Intergovernmental Panel on Climate Change (IPCC) calculated that the amount of carbon in the atmosphere must not exceed a trillion tonnes. Beyond that figure, they hypothesize, the effects of climate change become more devastating. In the last 300 years, 570 billion tons of greenhouse gases, or 57 percent of the total, have been released into the atmosphere.

Economic growth of developing economies, especially in South Africa and its Brics partners – Brazil, Russia, India and China – could result in about 330 billion tons of CO2 being pumped into the atmosphere by 2040. This will bring the planet closer to the critical level that will cause a 2°C increase in global temperatures. A two degree climb in global temperatures would cause crop failures and increase the size of deserts, melt glaciers and raise sea levels.

In February 2014, Johannesburg will host the C40 Mayors Summit. C40 is a network of 58 of the world’s largest cities that have made a commitment to reduce greenhouse gas emissions. They share expertise on climate risk and the impact of change locally and globally. With over 10 million trees and 2 000 developed parks, Johannesburg is the greenest South African city, according to a December 2012 study conducted by Siemens. The study, African Green City Index, compared 15 major cities in 11 African countries to provide insight into the strengths and weaknesses of local government responses to climate change.

Climate modelling by the city of Johannesburg suggests that temperatures in the region will rise by 2.3°C by 2056 if no action is taken to solve the problems facing the area. The municipality’s dependence on coal generated electricity, urban sprawl and congestion, high water consumption and low rates of recycling remain challenges.

Executive Mayor Parks Tau, speaking at the launch of the study, said these challenges were taken into account and with input from its international and local partners, it drew up the Joburg 2040 Growth and Development Plan as the municipality’s development roadmap. “We are faced with a formidable challenge but it is easier because we know the route forward. We can learn lessons from our partners to make our city and infrastructure more resilient.”

Over the next two years the city, in partnership with Siemens, will create 500 green jobs. “These will be people employed directly by the city to, for example, plant trees. However, by 2020 we foresee 30 000 new green jobs in the fields of renewable energy, building retrofits, recycling, water and waste management.” These were jobs in industries that did not exist today but by taking climate action, South African cities would be able to raise the living standards of its citizens by creating economic opportunity, the mayor explained.

Paul Kielstra, a contributing editor at the Economist Intelligence Unit and the head of the study, said climate challenge solutions provided an opportunity for Johannesburg to create jobs in new industries. “Climate change is an opportunity masquerading as a crisis. Governments need to take the lead in jumpstarting this next economy. By laying the foundation for a green industrial future now, South African municipalities are building wealthier and healthier futures.”