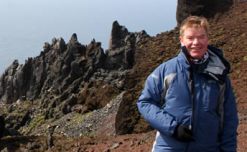 Professor Steven Chown, recognised for
his outstanding contribution to Antarctic
science and policy, is the inaugural recipient
of the Martha T Muse prize.
(Image: Stellenbosch University) 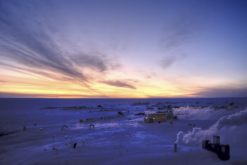 The ice-covered continent is protected
by the Antarctic Treaty, signed in 1959.
(Image: US Antarctic Programme)

Professor Steven Chown of Stellenbosch University is the inaugural recipient of the Martha T Muse prize for Science and Policy in Antarctica.

The announcement was made at a gala evening held during the Antarctic Treaty Summit, which took place from 30 November to 3 December at the Smithsonian Institution in Washington DC.

Delegates at the gala also celebrated the 50th anniversary of the signing by 12 nations, South Africa among them, of the Antarctic Treaty in the same city on 1 December 1959. The treaty came into force on 23 June 1961. Today, South Africa is the only African signatory out of the present 46 member nations.

The award recognises Chown’s status as a world leader in his field, and his work with invasive alien species on the snowy continent, as well as the effects of climate change and the many years of human inhabitation in the region. It is worth a one-off US$100 000 (R750 400).

As well as holding the position of director of the university’s DST-NRF Centre of Excellence for Invasion Biology, Chown is professor of zoology in the Department of Botany and Zoology at Stellenbosch.

The professor will also be a guest of honour at the 31st Scientific Committee on Antarctic Research (Scar) and Open Science conference in Buenos Aires in August 2010. Here the international polar community will gather to discuss various topics under four main themes: health of the Antarctic ecosystem, tipping points, continuity and change, and connectivity and cross-scale interactions.

Despite its wintry appearance Antarctica is regarded as a desert, with an annual rainfall of just 20cm. The continent has no permanent human habitation, but many bird, animal, plant and even insect species have adapted to the cold and now call the vast icy expanse their home.

Antarctica is almost completely covered by the Antarctic ice sheet, which is about 1.6km thick on average and constitutes about 90% of the world’s ice. This is the equivalent of about 70% of the world’s fresh water.

South Africa has been involved in Antarctic research for about half a century and runs the South African National Antarctic Programme, maintaining bases on the continent as well as on Marion and Gough Islands.

The Martha T Muse award is given by the Tinker Foundation, a funding organisation with a special interest in Antarctica, to individuals that contribute to the science- and policy-related understanding of Antarctica, and help preserve it for future generations.

Scar, a committee of the International Council for Science, and tasked with overseeing scientific research in Antarctica, acts as the administrative body in the award process.

The award is named after Martha Twitchell Muse, chair of the Tinker Foundation. Muse is known for her particular passion for Antarctica and intended the prize to honour a like-minded person in the early to middle stages of his or her career.

Prof Steven Chown has built a solid international reputation and has garnered many awards and honours.

Earlier in 2009, together with his colleague Prof Sue Nicholson of Pretoria University, he took the Bill Venter/Altron Literary Award for 2009 for their book on insect physiology. The award is presented for the most outstanding contribution to research by an academic, published in book form.

Also in 2009 he received the gold medal from the Zoological Society of Southern Africa for his contributions to zoology.

Chown obtained his PhD in Ecology and Systematics in 1989 from Pretoria University and immediately accepted a position as lecturer in the zoology and entomology department there. Just eight years later he received his full professorship.

Chown has been with Stellenbosch University since 2001 and with the Centre of Excellence for Invasion Biology since 2004. In the five years since he has built the centre into a world-renowned research institute that focuses on the impact and management of invasive plants and animals.

He is an A1-rated researcher according to the National Research Foundation, which establishes him as a world leader in his field of research, and consequently is in great demand as a lecturer at local and international meetings and workshops.

Under his supervision many M.Sc. and PhD students have obtained their degrees, and he has also mentored several post-doctoral researchers. Chown has set disadvantaged students on their career path by developing and running the USAID Capacity Building Programme for Climate Change Research on the Prince Edward Islands in the sub-Antarctic Indian Ocean.

A prolific author, Chown has published over 250 scientific papers and has co-written four books and contributed to 21 others. He edits two journals and sits on the editorial board of six other journals, among them The American Naturalist and Antarctic Science. He is also a member of a number of scientific societies.

Chown is said to have one of the highest h-factors of any South African zoologist – around 31. The h-index is a tool to measure the scientific productivity and consequent scientific impact of a scientist or group of scientists. It is based on the scientist’s most cited papers as well as the number of citations he or she has received.