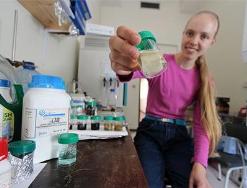 The kit, which was modified by doctoral student Catherine Luyt (pictured), will make water testing possible in rural and remote areas where there are no certified laboratories.
(Image: Rhodes University)

A home kit to test the microbial quality of tap water has been invented in a laboratory at Rhodes University, in Grahamstown, Eastern Cape, costing exactly R5 (US$0.56) to make.

The kit, which was modified by doctoral student Catherine Luyt, will make water testing possible in rural and remote areas where there are no certified laboratories.

The home kit is made up in a small container and consists of basic school science laboratory chemicals and everyday household items such as dishwashing liquid, tinfoil and chemicals including phosphates, sulphates and amino acids.

The project was originally started by Dr Roman Tandlich, a senior lecturer in Rhodes’ pharmacy faculty.

“South Africa has a need for water quality testing in rural areas where no laboratories are available, thus [there is] no equipment or incubators,” Tandlich says. “The development of a low-cost, on-site test is required as South Africa does not have financial resources to waste.”

Weekly laboratory tests can run into thousands of rand or more, depending on how many tests are done. Moreover, transportation of samples to laboratories from rural areas is potentially costly and often difficult.

With the home kit, anyone can conduct their own basic testing at home and local municipalities do not need to employ experts to identify problem areas, as the test can be used by people with minimal education and minimal training.

“The advantage of the modified kit is that for the first time, this cheap tool has the sensitivity of the government standard methods for microbial water quality,” says Tandlich.

The method of testing the water with the kit is very straightforward. Tap water is poured into a container with the test concoction; if the water contains bacteria it will turn black within three days. The test will not, however, show which specific bacteria are in the water, but it will alert the local authorities to test the tap water in affected areas, isolate supply line breaks, and measure the spread of the contamination.

“However, it should be noted that if the test is positive more expensive and sophisticated tests are required to confirm the results before any alarm is sounded about water being unsafe … Basically, it is an excellent warning system of potential contamination in tap water.”

Luyt also piloted student tests in Grahamstown. For years, the water in the academic town has been under scrutiny amid growing health concerns, and students living in residences were advised not to drink the tap water.

Dr Iain L’Ange, the executive director of infrastructure, operations and finance at Rhodes, warned students last year after floods in Grahamstown that tap water should not be used for drinking without taking additional precautions.

“There is work being done to produce the home kit for sale,” says Luyt. “It would still be very cheap and affordable as the ingredients are not very expensive and the whole aim is to make it affordable.”

She explains that the next step will be to develop a water monitoring group and get the municipality involved. “The municipality was approached at the beginning of the project but was not keen to get involved … However, the municipal staff has subsequently change and we are hoping that they may be amenable to getting involved.”