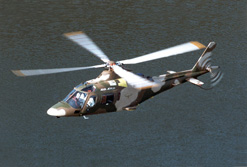 The Agusta A109 light utility helicopter.
Denel Saab Aerostructures, a subsidiary of
Denel, is currently manufacturing this
craft for the South African Air Force.
(Image: Denel)

South Africa’s aero-structure engineering and manufacturing sector is set to sky-rocket with the 19 August 2008 opening of the Centurion Aerospace Village (CAV), north of Johannesburg.

The R600-million CAV is designed as a supplier park to support the country’s innovative and fast-growing aerospace sector, built along the lines of similar clusters around the world, such as Silicone Valley in California and Toulouse in France. It follows the example of the local automotive industry, which has a successful facility in the Automotive Supply Park in Rosslyn, Pretoria.

The latter project is based at the Innovation Hub in Pretoria and is working to increasingly position the local aerospace industry as a key area for growth, as well as a major supplier in global markets.

“Technology and knowledge are now key facts of production in today’s most technologically advanced economies,” said Mpahlwa at the launch of the Aerospace Industry Support Initiative. “Hence my department regards certain industries as future industries, forming part of advanced manufacturing, and commits to their development. These industries include the aerospace and outer space and electro-technical industries which encompasses ICT, electronics, and electrical engineering.”

The CAV, a not-for-profit company, was funded with the help of the European Union, which contributed R20-million.

Other major aerospace projects underway in South African include the launch of the Sumbandila satellite in Russia in December 2008, South Africa’s bid to host the Square Kilometre Array radio telescope, and a number of others. These include the ambitious A400M Airbus military programme, of which South Africa is a launch partner, with Denel Aerospace Systems having secured a contract for fuselage components.

According to the DTI, the primary objectives of the CAV include not only the development of an efficient aerospace supplier park, but also the upliftment of small and black-owned businesses, as well as the repositioning of the aviation sector.

The initiative will help small companies gain a foothold in the industry, and create jobs. Already 1 500 new jobs have been created as a direct result of the establishment of the CAV.

Smaller companies in the CAV will find themselves close to major players such as the state-owned Denel and private corporation Aerosud. This will lead to greater collaboration, which will streamline the aero-structure supply chain and allow the big companies to operate more smoothly.

South African aero-structure manufacturer Aerosud is a key tenant of the CAV. The company supplies major international aerospace manufacturers, including Airbus, BAE Systems, Boeing and Agusta-Westland Helicopters. Denel, which arose out of the division of Armscor into two separate divisions for procurement and manufacturing, is an arms developer and manufacturer whose sole shareholder is the South African government.

The South African aerospace industry is an emerging priority sector, according to Francois Denner, director of the National Aerospace Centre of Excellence. “The future holds huge promise for new industries driven by cutting-edge technology interventions to once again be central to a thriving South African economy, resulting in a reverse of the so-called brain drain and our advanced industries being firmly integrated as part of the global supply chains,” he said.

Denner is firmly convinced of the potential of Denel and Aerosud to become first tier or direct suppliers to aerospace giants Boeing and Airbus, a possibility that can only be realised with the existence of a smoothly functioning supply chain.

Speaking at the official launch of the CAV in August 2008, Mpahlwa said that “The aerospace industry is a highly visible, prestigious and strategic industry that reflects South Africa’s ongoing transformation at home, whilst cementing the strategic ties with traditional trading and industrial partners in Europe and the US.”

The government’s National Industrial Policy Framework, which came into effect in August 2007, recognises the opportunities available for South African companies engaged in advanced manufacturing to participate in the world market and produce high-value export revenues.

The primary function of the National Industrial Policy Framework is to lay down government’s approach, for the short-medium and medium-long terms, to the industrial development of South Africa’s economy.