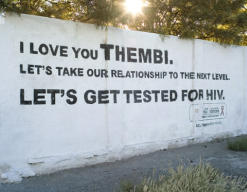 Although South Africa has the most HIV-positive people of any country, efforts in prevention and treatment are bearing fruit.
(Image: MediaClubSouthAfrica.com. For morefree images, visit the image library) 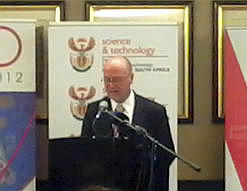 Science and technology minister Derek Hanekom emphasised the importance of research that will yield results in the long, rather than short term. 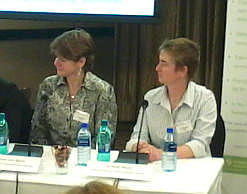 The South African medical and scientific community is abuzz with the news that local researchers have documented one method of the production in the body of broadly neutralising antibodies (BNAbs) against HIV – a discovery that could lead to the future development of a vaccine.

Researchers from the Centre for the Aids Programme of Research in South Africa (Caprisa), together with the ministers of health and science and technology, made the announcement at a media briefing in Johannesburg. Also in attendance were the US embassy’s Chargé d’Affaires, Virginia Palmer; Nancy Knight, country director of the Centres for Disease Control and Prevention (CDC); and Caprisa’s Prof Carolyn Williamson, a respected virologist.

Caprisa was founded in 2001 as a partnership between the universities of KwaZulu-Natal, Cape Town and the Western Cape, as well as New York’s Columbia University and the National Institute for Communicable Diseases (NICD) in Johannesburg.

Its main function is to carry out research of local and global relevance, and to advance the world’s understanding of the HI virus, as well as the tuberculosis connection.

“There is a range of different Aids prevention technologies,” said epidemiologist Prof Salim Abdool Karim, opening the proceedings, “and one of them is the development of an Aids vaccine.

“The work carried out by Caprisa and other institutions is crucial to our understanding of how the virus evolves in individuals, how the body responds, and how the virus mutates to escape the body’s onslaught,” he said. “This enigma, the variability of the virus, is the big challenge.”

The five-year study was led by virologist Dr Penny Moore, and funded partly by the Department of Science and Technology, the CDC, the Wellcome Trust, the Bill and Melinda Gates Foundation, and the Technology Innovation Agency, among others.

The results were published in a paper co-authored by 20 scientists – of whom 16 were South African – and released on 21 October in the online version of Nature Medicine journal under the title Evolution of an HIV glycan–dependent broadly neutralizing antibody epitope through immune escape.

Joking that South Africans can see that their tax money is being well spent, Minister of Health Aaron Motsoaledi praised the research team for the discovery, saying that it is a testimony to the world-class quality of South African scientists.

Science and technology minister Derek Hanekom also lauded the team. “This is an energetic group of emerging young scientists,” he said, “who are not all male and not all white. This is the new generation that is finding answers to the serious challenges confronting not just South Africa, but the world.”

He said it was significant that the research team is led by women. “One in five adult women in South Africa is HIV-positive. We need an arsenal of measures to fight the disease, but the prospects of winning the war without a vaccine are simply not good.”

Hanekom stressed the importance of research such as this, that doesn’t necessarily yield short-term results, adding that any investment will pay off, and that the knowledge in itself is just as valuable as the results.

“There are two types of HIV antibodies,” explained Moore, a senior scientist from the Centre for HIV and Sexually Transmitted Infections at the NICD, “one which is strain-specific, and the other that is broadly neutralising.”

The difference between these two types is that the former only recognises the virus that is present in the body which has produced it, while the latter type, which was itself only discovered about three years ago, is able to recognise and work against many different strains.

“Broadly neutralising antibodies are obviously more useful to us, but they are also much rarer, only appearing in one out of five individuals. Luckily we can learn much from these rare people.”

The remarkable discovery centres around two HIV-positive women from KwaZulu-Natal, both of whom were participants in separate Caprisa programmes – the Acute Infection Study, and the widely publicised Tenofovir Gel Microbicide Trial.

Both women spontaneously started to produce BNAbs some years ago, although at the time it was not known how or why. Moore’s research focused on discovering the mechanism through which these valuable substances are produced.

By tracing the women’s clinical history and studying the evolution of the virus and the antibodies’ target site, Moore and her team found that its mutation is the trigger for the production of broadly neutralising antibodies.

The key is the protective coating, or envelope, that the virus surrounds itself with in order to escape the action of antibodies. The target site in question is a sugar or glycan, located at a specific area on the protein envelope. This is an area of vulnerability to which an antibody can attach.

But the glycan, known as sugar 332, is not always present at the start of infection, as the team discovered.

“Because the virus is attacked right from the start by less powerful antibodies,” explained Moore, “it is forced to mutate in order to stay one step ahead of the body’s response. Over time it coats itself with this sugar, which becomes its Achilles heel.”

Tests conducted with 200 different HIV strains from around the world – half of them from Africa – have shown that the rare BNAbs are effective against 88% of them.

“This sugar is present in many viruses,” said Moore, “and because of it we now know one pathway to the development of broadly neutralising antibodies.”

The HI virus is one of those that are able to mutate rapidly to avoid deactivation by antibodies produced by the immune system.

“It mutates perhaps faster than any other virus,” said Moore. “A vaccine works on more stable viruses, and this is the reason that we don’t yet have an HIV vaccine.”

The thinking amongst researchers these days is not how to produce a vaccine, she said, but rather what can be learned from HIV-positive people that will help scientists to make a vaccine. Moore pointed out that the new finding is not a vaccine, but opens up a new path towards the development of one.

“This discovery is not about a cure,” said Abdool Karim, “but rather about prevention of infection.”

The two women came in faithfully once a month for many years, said Moore, to donate blood for research purposes. One of them is doing very well, with no detectable viral load at the moment, but the other has died from complications caused by tuberculosis which evolved into first the multidrug-resistant and then the extremely drug-resistant strain.

“However, she has left a legacy that will go far beyond her own life,” said Abdool Karim.

Motsoaledi agreed, saying that the subjects of the study deserved as much praise as the research team.

“Without them even the best idea can’t be tested. We owe our thanks to the two women, who are also scientists in a way, because through them we have found this breakthrough.”

Unfortunately the women’s health didn’t improve as a result of the formation of BNAbs, because the virus had already established itself over many years of infection and the damage was done.

“For a vaccine to be effective,” said Moore, “it has to get into the body before the virus.”

Making progress in the fight

South Africa has made progress in recent years in the war against the Aids epidemic. Although the country has the highest number of HIV-positive people in the world, there are 1.7-million people on antiretroviral treatment, and this strategy is slowly yielding results.

Other achievements include the tenofovir microbicidal gel trial, initiated by Caprisa in KwaZulu-Natal, and the decrease in the mortality rate of children under five, he said.

But the development of a vaccine is still years in the making, and until then Motsoaledi urged all South Africans to continue to take precautions and live a responsible lifestyle.

“HIV is a problem of all South Africans as well as the world in general. We need to take responsibility for our own lives.”