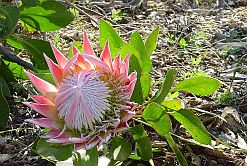 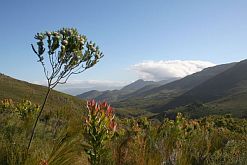 South Africa’s national plant, the protea, is creating a stir in botanical circles. An international team of scientists studying the magnificent plant and its habitat have discovered that new species of proteas, and other plants that exist with it, are appearing at a rate three times faster than anywhere else in the world, except Australia.

Living up to its name, which was given in 1735 by Swedish botanist Carl Linnaeus after the shape-shifting Greek sea god Proteus, new species of protea are bursting onto the scene at a rate that has the scientific world agog. The plant is found in both South Africa and Australia.

This super-fast evolution is creating a hotspot brimming with species richness, according to a recent report published in the journal Proceedings of the National Academy of Sciences and titled Contrasted patterns of hyperdiversification in Mediterranean hotspots.

The team consists of botanists affiliated with renowned institutions in the UK, Australia, Sweden and the US. These include the world-famous Royal Botanic Gardens at Kew and its similarly-named counterpart in Melbourne, the Swedish Museum of Natural History, the National Herbariums of New South Wales and Victoria, Uppsala University, Florida State University, and South Africa’s Rhodes University.

The protea occurs abundantly in South Africa’s Cape Floristic Region, also known as the Cape Floral Kingdom. This area is one of just five on earth which enjoy a temperate Mediterranean-like climate and have been designated as biodiversity hotspots by Conservation International, a non-profit organisation that works to protect these high-biodiversity areas.

South Western Australia is another hotspot, and the other three are located in central Chile, California, and the Mediterranean basin.

According to biologist Vincent Savolainen of the Royal Botanic Gardens in Kew, species other than proteas, also occurring in the two regions, are very likely experiencing the same phenomenon.

“This study proves that the abundance of different kinds of proteas in these two areas isn’t simply due to normal rates of species diversification occurring over a long period of time,” he said. “This is the first step towards understanding why some parts of the planet with a Mediterranean-style climate have become species-rich biodiversity hotspots.”

Previously there had been no explanation for the existence of biodiversity hotspots, but the new research has led the team to believe that that climatic changes millions of years ago could have sparked the so-called hyper-diversification of proteas in Australia and South Africa.

“As these two regions became hotter, dryer, and prone to seasonal fires,” explained Savolainen, “proteas – which are drought-resistant and able to re-grow easily after a fire – would have survived, thrived and diversified into new species when faced with less competition for resources from less hardy plants.”

Today both areas are environmentally sensitive and need careful conserving, he added, and understanding more about their evolutionary history can help make conservation efforts more efficient.

The Cape Floristic Region is one of only two that encompass an entire floral kingdom – the other is New Caledonia in Canada. It has the greatest extratropical (outside of the tropics) concentration of plant species in the world, with 9 000 plant species. Some 6 200 of these are endemic.

The most prevalent type of vegetation in the Cape Floristic Region is the fynbos (Afrikaans, meaning “fine bush”, referring to the tough, needle-like leaves of so many of its specimens). There are four major plant types within the fynbos classification – bulbs, restioids, ericoids and proteoids. The latter consists of the Proteaceae family, which includes the king protea (Protea cynaroides), South Africa’s national flower.

Proteas originated 300-million years on the vast continent of Gondwanaland. The Proteaceae family comprises two subfamilies: the Proteoideae of southern Africa, and the Grevilleoideae of Australia and South America. These two continents were also part of the great mass of Gondwanaland, which started to break up about 167-million years ago during the Jurassic period.

The bulb section of fynbos includes more than 1 500 familiar species such as freesias, agapanthus, gladioli, and ixias, which have become popular around the world.

Other biodiversity hotspots in South Africa are Succulent Karoo and Maputaland-Pondoland-Albany.