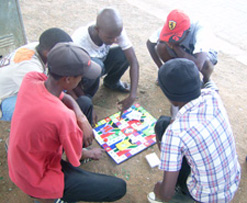 Kids play Get to Know Your Legislature,
a board game that teaches them the
importance of knowing how the country’s
law-making body operates.
(Image: Dan Modiakgotla) 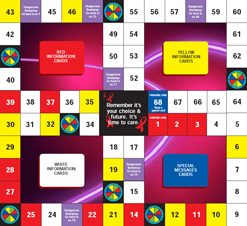 The HIV/Aids board game designed to
educate both kids and adults on the disease.

While technological advancements are part of modern-day educational programmes, one man still believes in the power of hands-on board games.

Dan Modiakgotla, creator of Afro Games, believes in going back to basics in order to prepare for the future.

Many youth centres around the Northern Cape are benefiting from the series of Afro Games board games. People of all ages are learning more about dealing with issues such as HIV/Aids, financial planning and self improvement.

Modiakgotla has an existing set of 14 games that target not only psychological development, but also language and mathematical skills. One such game, Brain Teaser, is specially designed to improve language and spelling abilities. Like the well known game Scrabble, players can build words, in any language, of between four to 13 letters.

Get to Know Your Legislature educates communities about provincial governments’ legislative processes. It highlights the importance of public participation and encourages players to engage with law makers.

The Department of Education has expressed interest in using Modiakgotla’s games, while the Department of Social Services has already adopted the popular HIV/Aids awareness game.

“When it comes to HIV/Aids education people are given T-shirts, caps and water bottles,” says Modiakgotla. “These items do not engage with the psyche of a person so I thought of something that will stay in the minds of people for a long time. It’s great because if the games are played in households, it encourages parental participation and families to engage with each other on a fun level.”

For scholars who have trouble grasping lessons and who need extra academic attention, the Study Guide and Maths Quiz allow students to learn from each other and to interact both in and outside the classroom.

Modiakgotla is particularly proud of his “masterpiece”, a game called, That’s Life. It’s a morale booster that contains quotes from religious scriptures and various motivational speakers.

“I am specifically proud of this game because it teaches teenagers so many things. Things that are oblivious or don’t make much sense when you’re a teenager. It’s great for boosting low self esteem that so many of our youth suffer with today,” he says.

Modiakgotla grew up in a household of board game lovers. His regular opponent on the chessboard, his uncle, taught him perseverance and concentration. He soon realised the benefits of board games, not only in the academic sense, but also in character building.

And it’s fun! Each board game can have up to 16 players and there are no age limits. Modiakgotla has also steered away from traditional dice and beads and has modified accessories to complement the games.

The materials for each game are of shop quality, says Modiakgotla. It was an expensive step but one that he believes was important for marketing his business and ensuring that buyers get value for their money.