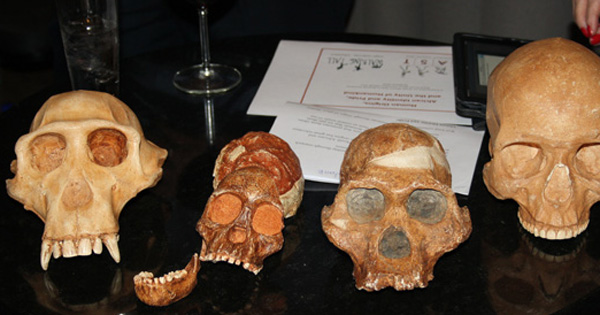 Hosted by Brand South Africa, bloggers are being introduced to hi-tech developments across the country, including the Square Kilometre Array. At the Hyatt Regency in Rosebank, on 24 March, they met Andrea Leenen, the chief executive of the Palaeontological Scientific Trust (Past), and American Professor Emeritus of Evolutionary Anthropology Robert Blumenschine, the chief scientific, education and fundraising strategist at Past. Both took the opportunity to discuss the stark realities of evolution. (Images: Melissa Jane Cook)

Retracing our past was the perfect introduction to a group of foreign journalists and bloggers who are exploring innovation in South Africa.

Hosted by Brand South Africa, they are being introduced to hi-tech developments across the country, including the Square Kilometre Array. At the Hyatt Regency in Rosebank, on 24 March, they met Andrea Leenen, the chief executive of the Palaeontological Scientific Trust (Past), and American Professor Emeritus of Evolutionary Anthropology Robert Blumenschine, the chief scientific, education and fundraising strategist at Past. Both took the opportunity to discuss the stark realities of evolution.

“Africa is the birthplace of humankind and the continent [preserves] a fossil record for our origins and ancient heritage found nowhere else in the world,” said Leenen. Past, based in Johannesburg, is a public benefit organisation. Since 1994, it has been dedicated to protecting, preserving and promoting Africa’s ancient cultural and natural heritage for the benefit of Africans and all humans.

Past is the world’s largest independent organisation that supports the study of human origins. It uses its position to educate, turning to a physical theatre group to explore our origins. The actors move around the stage imitating monkeys and the evolution of humanity. The jumps, tumbles and other body movements prove that physical theatre is an extraordinary way to break barriers. It is also a means of communicating that everyone, regardless of language, can understand.

Leenen explained that Past’s signature educational initiative and the foundation of its overall mission was the Walking Tall project. “It offers workshops for secondary school students and teachers that increase scientific literacy through an understanding of the origins of life and humankind.”

It showcased the origin sciences as a career track in which Africa’s geographical advantage in the field could and should result in global scientific leadership. “It exposes students to applied evolution and related emerging career opportunities in agriculture, medicine and environmental remediation. It addresses Africa’s critical role in shaping humanity and uses humankind’s recent origin in Africa as a transformative tool to instil dignity in the continent and promote equality among all people,” she said.

Blumenschine added: “We use theatre to teach science, to show that it is not a dry and academic subject, but [is] fun and interesting.”

The student workshops feature the physical theatre production, which takes its audience on a 4.6 billion year journey through time from the origins of Earth to the present day. The show is followed by a scientific session in which the basic principles of evolution and the origin sciences are explained. These are key elements of life sciences curricula across Africa. The workshops conclude with a question and answer session. Complex issues are raised, such as skin colour as an environmental adaptation that cannot be used to define race, and conflicts between science and religion.

“Walking Tall is a mobile, cost-effective and lasting educational intervention and outreach mechanism that since 2002 has reached almost one million people, primarily students and teachers in South Africa, but also audiences in Namibia, Tanzania, Kenya, Belgium and Sweden,” said Blumenschine. The show is an effective education tool, and can be performed in an auditorium or under a tree.

Blumenschine has conducted archaeological and wildlife research in east Africa, southern Africa and India. He co-directed the Olduvai Landscape Palaeoanthropology Project at Olduvai Gorge in Tanzania and has embarked on a pan-African campaign, working in Tanzania, Ethiopia and Kenya. He supports research and education. “We want to spread support as here, in South Africa, there is such a wonderful heritage. I get so dismayed by people who don’t appreciate fossils; people must be proud of their heritage,” he said. 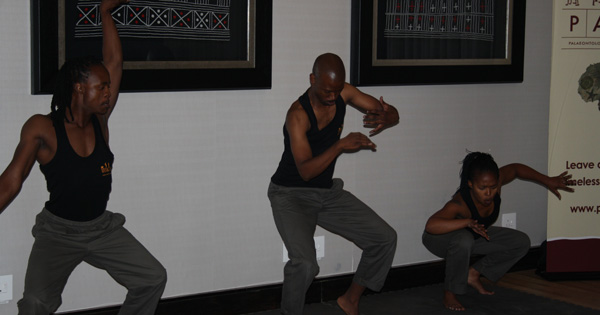 The student workshops feature ‘The Walking Tall’ performers and their physical theatre production, which takes audiences on a 4.6 billion year journey through time from the origins of Earth to the present day. The show is followed by a scientific session in which the basic principles of evolution and the origin sciences are explained.

“Origins is a positive message that allows us a common ground, it is the basic foundation for all of us. Pre-democracy, the government prohibited the teaching of evolution. Here, we have a rich understanding of our origins. Africa is the custodian of this world heritage and people must know this.”

The organisation offered a fresh angle into science, Leenen explained. “People are always after the headline story, but it’s so much bigger than this. It links all people on the planet. It is the African story. People always think science is complicated, that it’s natural selection and genetics.

“[But] teaching like this crosses boundaries. It’s not an old guy in a lab coat, or a doctor or a geneticist. This is accessible to all. It is the mother of all sciences and the gateway for kids.”

Understanding ancient heritage is critical to central aspects of modern society. Past urges us to use our origins to instil pride in South Africa and for an African identity. “We must promote our unity amid diversity. Our shared African roots should be a potent source of global unity. This is the rainbow nation and that is a scientific fact,” Blumenschine said.

Focused originally on South Africa, Past has recently implemented a development plan to expand its education and research programmes throughout Africa. Named Scatterlings of Africa, after the song by Past champion Johnny Clegg, its longer term aim is to bring the organisation’s education and public outreach initiatives to global audiences.

“We want to inspire scientific curiosity and an appreciation for ancient heritage among Africa’s youth, and to develop global scientific leadership by African origin scientists,” said Leenen. “Past also uses the origin sciences as a powerful tool for building African pride and dignity as well as promoting racial harmony and environmental conservation.

“The first spark of human consciousness was from Africa and only this continent tells the human story which lies in fossil bones.”

Our shared African roots are seen in our 99.9% genetic similarity to one another. Biologically, humans are all the same; there are only superficial differences on the exterior. Leenen maintained that when the group spoke to and performed for underprivileged children, these children saw that they had potential – “they see that we are all the same. Our similarities far outweigh our differences.” This was a fundraising campaign to “leave a legacy as timeless as our past”.

Miller Matola, the chief executive officer of Brand South Africa, said we are ready to be taken on a journey in welcoming “home” the foreign visitors. He introduced Collins Chabane, the minister for performance monitoring and evaluation in The Presidency, who said: “We have moved forward and South Africa is a better place to live. Our experience is different from anywhere in the world and we have all laid the foundation to build our legacy.”

Chabane said that the Square Kilometre Array (SKA) was very beneficial for South Africa. The SKA is a series of radio telescopes, which look like large satellite dishes. Radio telescopes are used in radio astronomy, the branch of science concerned with radio emissions from celestial objects – galaxies, stars and the like – which are used to determine their size, mass and chemical composition. The SKA infrastructure is expected to encourage schoolchildren and students to take up science and technology subjects, leading to the growth of a new class of scientists.

Leenen concurred that “with SKA, and Past, looking into the origins of life and origins of the universe, here, we can offer answers to both of those”.

Brand South Africa was established in August 2002 to help create a positive and compelling brand image for South Africa.