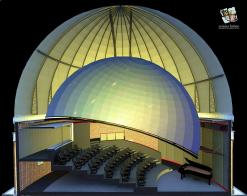 An architect’s rendering of how the planetarium will look when completed.
(images: University of the Free State) 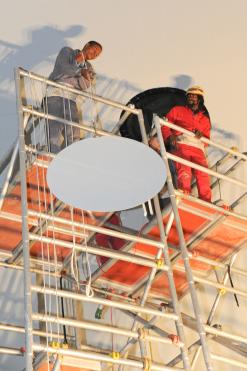 Workmen installing the interior dome which will become the “screen” of the planetarium.

Central South Africa is becoming known as the astronomical heartland of the country. There’s SALT, the Southern African Large Telescope, in Sutherland; the development of the incredible Square Kilometre Array, or SKA, near Carnarvon; and now the city of Bloemfontein is going to have its very own digital planetarium – the first in sub-Saharan Africa.

The finishing touches are being put to the planetarium, which is housed in a domed structure at the Lamont-Hussey Observatory on Naval Hill. Naval Hill is a well-known tourist attraction in the city, with spectacular views of the urban landscape and the surrounding area. The digital dome recently fitted on to the existing observatory structure is a 12m seamless aluminium screen complemented by a powerful surround-sound system and multiple data projectors, together offering a multidimensional experience of the digital universe.

It will be operated by the University of the Free State (UFS), which is responsible for developing the concept and for implementing the project. Right and responsibility to set up the planetarium was granted to UFS by the Mangaung Metropolitan Municipality, which is a partner in the development. The project is part of the overall upgrading of Naval Hill. Also on board are the Free State department of economic development, tourism and environmental affairs, which is also a founding partner, and the national Department of Science and Technology, as well as a number of private sector funders.

The venture started out two-and-a-half years ago, when UFS approached the municipal department with a proposal to establish a planetarium at Boyden Observatory near Bloemfontein. It was, however, suggested that the planetarium be located on Naval Hill to complement existing tourist attractions, including the Franklin Game Reserve.

Sky-Skan is the company installing and supplying equipment at the new digital planetarium. It has created planetariums in museums and science centres around the world, including installing one on the Queen Mary 2 ocean liner, in the White House gardens and at Notre Dame University. Andrew Johnson, an engineer at Sky-Skan, says the Bloemfontein digital planetarium is unlike any other project on which he has worked. “What makes this project unusual is the fact that we convert the existing observatory structure into a modern digital planetarium. It is not often done.”

Apart from being exposed to the “digital universe”, which is a major highlight, the planetarium will also give visitors the opportunity to view pre-recorded shows about many subjects, for example, on the environment, oceans and even organs in the human body, he explains.

The digital planetarium will not only be the stomping ground of wannabe astronomers and visiting stargazers, it will have many uses for the community and university as well. It will double up as a multipurpose facility to promote the sciences and the arts and will be a versatile venue that can be used for intimate theatre and musical performances, concerts, conferences and exhibitions, and will certainly add to the tourism offerings of Naval Hill.

Lacea Loader, UFS director of strategic communications, is very excited about the prospects. She says: “The planetarium will contribute to the revival of Naval Hill, and will be a unique tourist attraction for the Free State.”

City of Stars and Roses

Redevelopment of Naval Hill is a three-tier project, the first being the opening of the digital planetarium and the rebranding of Bloemfontein as “the City of Stars and Roses”. There are also plans to develop an eco-park recreational area (phase 2), and an international convention centre, hotel and office park (phase 3).

Professor Matie Hoffman from the UFS department of physics, says the digital planetarium is creating quite a stir on all levels, from the government to the media and the wider public. “This recognition and national interest demonstrates the importance and contribution of the first digital planetarium in sub-Saharan Africa to science and astronomy. It is also evidence that a facility like this is important for the training of the next generation of scientists.”

Bloemfontein’s digital planetarium will see “First Light” on 1 November. Minister of Science and Technology Derek Hanekom will speak at the opening. While some shows will be presented to the public in 2013, the planetarium will be fully operational only by February or March 2014. Entrance fees are expected to be approximately R50 a person, depending on the format of the presentation. Opening times will be advertised in due course on the UFS website.