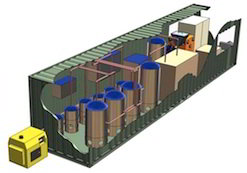 The waste recycling plant fits into a standard
container and is completely portable. 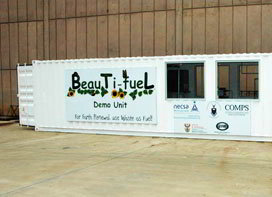 The modular unit, known as the BeauTi-FueL project, was developed by an all-South African team and has a negative carbon footprint.

The R5-million (US$590 000) pilot plant will be showcased at the COP17 climate change conference in Durban next week.

The unit was designed with a focus on smaller communities with lower energy and fuel consumption requirements.

The process allows solid material with a carbon content to be converted using plasma gasification technology, supplied by Necsa.

Plasma technology is used in the treatment of nuclear waste. According to how stuff works, a plasma waste converter applies a plasma torch to waste. A plasma torch uses gas and powerful electrodes to create plasma (ionised gas).

When molecules are exposed to intense energy, such as the heat generated by a plasma torch, the molecular bonds holding them together break down in a process called molecular dissociation.

“The ease with which the process gas could be manipulated to optimise fuel production, combined with the resultant fuel gas generating electricity, renders this a sought-after system for anyone who generates waste,” van der Walt said in a statement.

According to Prof Diane Hildebrandt, co-director of Comps, the plant can turn one ton of biomass into one barrel of diesel and 0.5 megawatt hours of electricity per day.

A full-scale plant can treat 91 000 tons of municipal waste per annum. This can produce enough electricity for 10 000 homes and enough heat for about 700 homes.

The main goal of the plant is to empower small communities to become more self-sufficient in terms of energy, without compromising potential food sources.

Hildebrandt says that the project has the potential to create jobs when implemented.

Readily available waste products, previously of no value to local communities, can now be used to earn an income.

People will be needed to grow the agricultural material, collect and sort municipal solid waste and supply fuel and electricity to small municipalities, rural areas and small farming areas.

The other major benefit of the unit is its portability. The plant is small enough to fit into a standard 40 ft (approximately 12 metres) container, on the back of a truck.

It can easily be transported to different sites in rural and agricultural communities, thereby reducing transport costs and the logistical hassle of transporting waste to a central processing site.

The plant is also easy to operate. Vrey says that one of the main considerations was to develop a user-friendly plant that requires limited technical knowledge to operate.

“We didn’t want a high-tech product that can only be operated by an engineer,” she says.

Hildebrandt says in the long term, they hope to use the clean carbon dioxide produced by the process to grow algae that could be harvested and fed back to the plant, or used to feed fish.

She says that this would be labour intensive and could create more employment.

A solution for waste

Vrey says the new technology can make a major contribution to reducing waste in South Africa.

“South Africa has a huge waste problem and landfills are filling up. Such technology presents a solution,” she says.

Recycling waste relieves pressure on over-stretched landfill sites, but recycling alone is not a solution to the challenge.

Vrey says that the next step is to find a commercial partner for the project.

“We are also looking for orders from people who want to use the technology,” she says.

A functional prototype will be built by mid-2012 and will be showcased at different public events around the country. During this period, the technology will be refined and the facility will be demonstrated to potential clients. 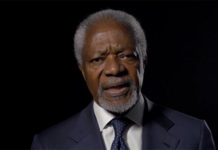 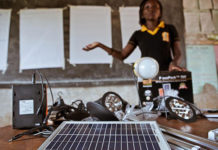