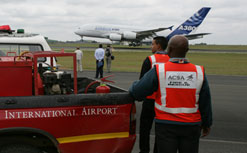 The Airbus A380 touches down at OR
Tambo International Airport in November
2006. The A380 is the world’s biggest
passenger aircraft. (Image: Airbus) 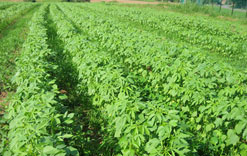 The aeronautical use of crops such as
kenaf, a member of the hibiscus family,
will be explored by Airbus and the CSIR.

The South African Council for Scientific and Industrial Research (CSIR) and international aircraft manufacturer Airbus have entered into a partnership to develop new natural fibre-based composite materials for use in aircraft interiors.

The project started in October 2007 and will extend over three years, taking place in two phases of 18 months each. The initiative is under the guidance of a consortium comprising Airbus, the Pretoria-based CSIR, the science faculty at the Nelson Mandela Metropolitan University in the Eastern Cape, and the Centre for Research in Computational and Applied Mechanics at Cape Town University.

Airbus is also consulting with the CSIR on research in the field of computational fluid dynamics, it was announced earlier in 2008. The CSIR is now an accepted member of Airbus’s global research and technology network, and aeronautical engineers from the CSIR are to help develop specialised mathematical software to aid in the design of cleaner, smarter, next-generation aircraft.

South Africa is poised to become a major global player in this specialised and highly competitive field. “Computational mechanics is an extremely exciting field where the sky is no longer the limit, but the next frontier,” said CSIR principal computational aerodynamics researcher Dr Arnaud Malan. “To us, this contract says that the CSIR and South Africa are viewed as holding expertise and technology on par with the best and brightest in the world.”

South Africa’s national Department of Science and Technology has a memorandum of understanding with Airbus in research and technology and has a number of projects under way with the France-based aircraft manufacturer, including the project on computational fluid dynamics.

The department awarded the composite materials project to the CSIR, which already has expertise in the use of natural fibres in the automotive sector, under its Advanced Manufacturing Technology Strategy programme.

Hemp, jute, flax and sisal fibres are already used in the automotive industry, which is under pressure to develop environmentally friendly cars, as a substitute for glass fibre in interior plastic components. These may be polypropylene, polyester or polyamide, with the incorporation of natural fibres. None of these components is load-bearing – as would be the case for components manufactured for aircraft, such as ceiling and sidewall panels.

CSIR chief researcher on the project, Dr Rajesh Anandjiwala, says natural fibre composites may provide answers to some key challenges faced by the automotive and aerospace industries. Anandjiwala and three senior colleagues are currently conducting research into natural fibres at the CSIR’s Materials Science and Manufacturing Centre in Port Elizabeth. This facility, says the organisation, is one of the top four in the world.

Increased demand for natural materials such as sisal and kenaf, a member of the hibiscus family, is good news for South African farmers, especially in the Eastern Cape where such crops are produced extensively.

“These crops are attractive to us because they are low-density, biodegradable, recyclable, carbon-dioxide neutral, non-abrasive, low-cost and widely available, although they also have some properties that restrict their application in aircraft,” said Airbus’s senior vice-president for research and technology Axel Krein.

“One of our primary objectives is to support the continual drive to address the parallel challenges of reducing aircraft weight, improving fuel efficiency and minimising our products’ impact on climate change,” added Krein. “This includes our aim of developing a fully recyclable aircraft cabin interior. In our quest, we are searching for suitable cabin materials which will help us meet these challenges head-on.”

Anandjiwala said the CSIR hopes that its scientific research will ultimately lead to the increased industrial use of natural fibres, which will provide vital socio-economic benefits for the Eastern Cape’s large subsistence farming community as well as for commercial agriculture.