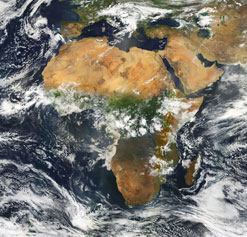 Science in Africa is to come under the
spotlight through the AU Scientific Awards.
(Image: Nasa)

Two South African scientists have walked off with top honours at the inaugural African Union Scientific Awards. The awards programme was launched in September 2009, and the laureates were announced earlier in 2010.

’s (Wits) Professor Diane Hildebrandt and Professor Patrick Eriksson of were singled out for the prestigious honour from 48 entries sent in from all over .

Two categories were judged – Life and Earth Sciences, which Eriksson won; and Basic Science, Technology and Innovation, which Hindebrandt won. Each received a prize worth US$100 000 (R731 061).

President Jacob Zuma was quick to applaud the achievement of the two scientists during the awards ceremony, which took place in during the 14th AU summit.

“I say with pride that South Africans continue to display excellence in various fields in the international arena,” said the president.

“On behalf of the South African people I wish to congratulate Professor Hildebrandt and Professor Eriksson, and wish them well in their endeavours to make and the world a better place to live.”

Hildebrandt, one of ’s top chemical engineers, is a professor of sustainable process engineering in the and Metallurgical Engineering, and is also co-director at the university’s Centre for Optimisation Modelling and Process Synthesis.

She started her career as a process engineer at ’s fuel giant Sasol and obtained her BSc, MSc and PhD in chemical engineering from . Her career at her alma mater now spans more than 20 years.

Hildebrandt was the first woman chemical engineer to earn an A rating from the National Research Foundation. A prolific author, she has more than 50 papers to her name.

Winning awards is not a novelty for her – she’s already been honoured with the Vice-Chancellor’s Researcher of the Year Award in 2002; the Bill Neale-May Gold Medal of the South African Institute of Chemical Engineers in 2000; the Meiring Naudé medal of the Royal Society of South Africa in 1997; the Distinguished Researcher Award of the University of the Witwatersrand in 1996; and the President’s Award of the Foundation for Research and Development in 1996 and 2010.

“I’m grateful for the award and look forward to making further contributions to and its development,” she said in an interview with University World News, adding that there are many scientists who strive to improve conditions for all Africans, often under difficult circumstances.

Eriksson is head of ’s Geology Department, a post he has held since 2006. He joined the department as a lecturer in 1982 and rose to a professorship 12 years later. Eriksson completed his PhD in 1984 and obtained a higher doctorate from in in 1998.

He lectures in sedimentology and his research focuses on the evolution of Precambrian (sedimentary) basins. He is a member of the New York Academy of Sciences and a Fellow of the Geological Society of Africa, and still finds time to act as editor-in-chief of the Journal of African Earth Sciences.

The National Research Foundation gave him an A research rating in 2007.

Accepting the AU award, Eriksson paid tribute to his peers on the continent.

The AU Scientific Awards programme is aimed at inspiring the continent’s best minds to bigger and better achievements, and also celebrates their efforts to boost entrepreneurship in science and research, attract investment into African science, and establish scientific centres of excellence in Africa.

Winners are selected according to several criteria, including the number of publications they have written or co-written, the number of graduate research students they have mentored, and the relevance of their work in tackling the challenges facing the African continent as well as the ease of application.

Besides the AU Science Award, also up for grabs are the AU Young Scientist Award, handed out on a national level to promising researchers under 35 years of age, and the AU Woman Scientist Award, which is region-based. These prizes fall into the same two categories as the main accolade.