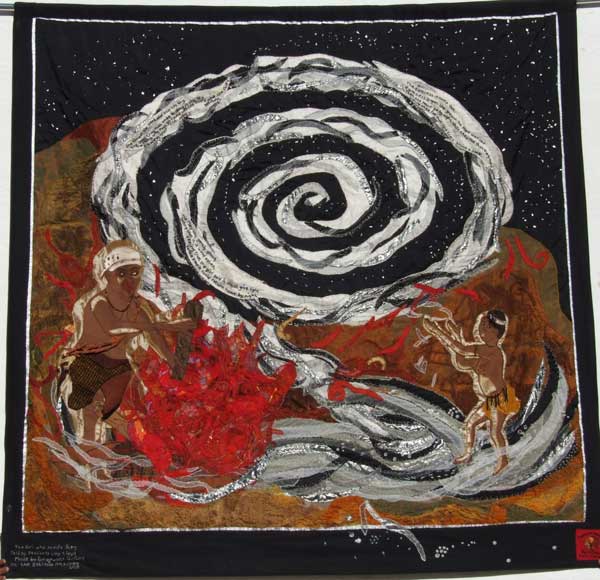 Ray Maota
The delight in the night sky had by ancient peoples of South Africa and Australia, as well as their reverence for the celestial bodies, is celebrated in an exhibition hosted by the Square Kilometre Array (SKA).

Shared Sky, as it is called, features works by indigenous and local artists from the two nations, both of which are responsible for the SKA. It was opened in the Australian city of Perth at the end of September, and will move to South Africa in January 2015.

A collaboration between Curtin University’s Institute of Radio Astronomy and the John Curtin Gallery, the exhibition was curated by Chris Malcolm, the director of the Curtin Gallery. Its purpose is to connect artists from remote communities from both sides of the Indian Ocean, as well as establish a connection to ancient cultural wisdom at the two sites where the SKA will be located.

The exhibition was opened in tandem with the SKA Engineering meeting of all the teams from around the world that are working on the design of the first phase of the SKA. It is the world’s largest radio telescope, and is being built in both countries.

South Africa was represented at the opening by three artists from a community arts centre in Nieu-Bethesda, in Eastern Cape, and an engineering delegation from SKA South Africa. They were Nieu-Bethesda community arts director Jeni Couzyn and artists Sandra Sweers and Gerald Mei, both of whom are descendants of the /Xam-speaking San who lived where the SKA telescopes are being built in a remote area of Northern Cape.

Shared Sky features quilts made by artists from First People at Bethesda Arts Centre that capture elements of /Xam mythology around the origins and movements of celestial bodies, such as the sun, the moon and the Milky Way. The quilts explore the San’s creation myths and reflect the ancient culture of the artists’ ancestors. These hardy people survived in the harsh deserts of the Karoo and Kalahari.

The First People at Bethesda Arts Centre website explains that large art quilts reflect a visual language that stretches back to a time of great antiquity – to underline the length of the San’s history, it points out that fragments of ostrich eggs that are between 65 000 and 75 000 years old have been found in the Karoo.

Their Australian counterparts included artists from the Yamaji Centre, in Western Australia, and other Aboriginal artists. Australia’s first people were still living a largely traditional way of life, hunting and gathering, until the mid-nineteenth century, on that nation’s SKA site.

Dr Bernie Fanaroff, the SKA South Africa director, reiterated the commonalities between art and science. “They are both about beauty and aesthetics – most science is beautiful, and so is most art. The quilts are really beautiful in themselves – colourful and dynamic. Science is like that too.”

The SKA will greatly enhance humanity’s knowledge of the universe across us, explains the SKA’s website, and may help answer some of the ancient questions that have been posed by people since they first looked up into the night sky. Understanding what sustains the rhythms and patterns of the world around us continues to be one of humankind’s most enduring fascinations. “The movement of objects across the night sky has been a profound source of inspiration for artists since time immemorial. The desire to understand has informed creation myths and stories amongst human populations across the globe for countless generations.”

The links between the two continents involved in the SKA run deep: recent findings indicate that Australian Aboriginals are probably descendants of the first modern humans to migrate out of Africa, moving from Africa to Asia about 70 000 years ago. They arrived in Australia about 50 000 years ago.

The Yamaji (or Yamatji) is the name used to identify Aboriginal people in the Murchison and Gascoyne regions of Western Australia. “Yamaji” comes from the Wadjarri (or Wajarri) language and means “man” or “human being”. Wadjarri is the widest spoken remaining language in the region.

According to the SKA, for Yamaji people – indeed for many Aboriginal communities across southern Australia –the appearance of the dark shape of an emu stretched out along the length of the Milky Way has heralded the season for collecting emu eggs for thousands of years.

/Xam-speaking people are descendants of the San, the earliest hunter-gatherers in southern Africa. San languages are characterised by implosive consonants or “clicks”. Broadly speaking, they are two different and identifiable languages, namely the Khoikhoi and San. Many dialects have evolved from these, including /Xam, N?¡, !Xu, Khwe and Khomani.

South African History Online explains that /Xam speakers originally occupied a large part of western South Africa, but by 1850 there were only a few hundred /Xam speakers left, living in remote parts of Northern Cape. Today, the spoken language no longer exists, but it survives in 12 000 pages of hand-written testimony taken down word-for-word from some of the last /Xam speakers in the 1860s and 1870s. These pages record not just the /Xam language, but also their myths, beliefs and rituals.