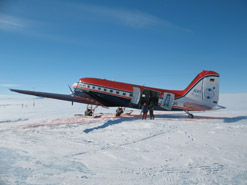 The DC3, designed before the Second
World War, is still in service in many parts
of the world, including the cold white
continent. 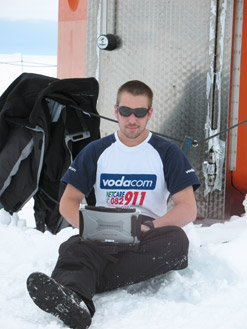 While recording patient details into his
laptop, paramedic Richard Mulder enjoys
the sunshine despite the -24º temperature.
(Images courtesy Richard Mulder) 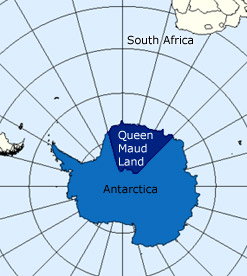 Antarctica is the end of the world.  It’s so far south that, in winter, the sun never rises above the horizon. It’s separated from the nearest permanently inhabited land by thousands of kilometres of wild and stormy ocean.

Nothing grows there. There are no insects, and even bacteria can’t survive outdoors. It’s cold, white and unutterably beautiful. And the scientists who spend a few weeks or a few months or even a year there are – in the truest sense of the word – isolated.

It’s not as bad now as it was in the days of Scott and Shackleton, when the families of intrepid explorers would not hear from their loved ones for a good couple of years, not knowing whether they were alive or dead, and simply living in hope that they’d turn up on the doorstep one day.

We’ve come a long way since then. With email, satellite phone, radio, GPS and a host of electronic wizardry, communication with the rest of the world is relatively easy. So now, if someone gets sick, or is injured in the cold white wilderness of Antarctica, it’s not the death sentence it would have been 100 years ago.

About 30 countries are signatory to the Antarctic Treaty, most of which have permanent or summer stations on and around the frozen continent.

People who spend a year, or even just the summer, in this isolated part of the world have to be pretty special – and healthy. While every station has a doctor, or at least a paramedic, there is only so much that can be done out there on the ice.

That’s why, in November 2008, the 11 countries with stations on Queen Maud Land – the part of Antarctica closest to South Africa – arranged with South Africa’s Netcare 911 and the Christiaan Barnard Memorial Hospital in Cape Town to provide emergency medical care when needed.

It seemed a sensible precaution, but no-one expected this understanding to be acted upon a mere six weeks after its signing. But that’s exactly what happened when Walter Seeberg suffered a heart attack on 17 December at the German Neumayer 2 Base on the Antarctic ice shelf in the northeast Weddell Sea.

Seeberg had only been in Antarctica eight weeks, working as a technician on the base’s ventilation system, when he collapsed with chest pains. It was clear to the resident doctor that he had had a heart attack, and would need more sophisticated treatment than was available at the base.

“They realised that he was in dire need of surgery, and then immediately called the Netcare Christiaan Barnard Memorial Hospital,” says hospital manager Chris Tilney.

As Dr Stephanie Fischer, a cardiac anaesthetist, was preparing to go to Seeberg’s aid, the hospital got news that Nikolay Rassalov, a crew member on a Russian ice breaker, had fallen and broken his ankle. It was decided to send Richard Mulder, a Netcare 911 paramedic, along as well.

By the evening of the 18th of December, only a day after receiving the first call, Fischer and Mulder were strapped in to their seats in an Ilyushin 76 cargo plane en route to Antarctica.

“We landed at Russia’s Novolazarevskaya base in the Antarctic about six hours later,” says Mulder.

“From there we were transferred to a smaller DC3 plane that is used to fly between the bases run by various countries on Antarctica. After a two-and-a-half-hour flight, we finally arrived at the German Neumayer 2 base.”

Seeberg had been treated by the resident doctor and was in a stable condition when Fischer and Mulder arrived.

“All the people at the German base were delighted to see us and they were most helpful. They helped us to keep him comfortable in order to attend to him,” says Fischer.

It was fortunate that both Fischer and Mulder are fluent in German, which made communication at this critical time so much easier.

“It was really just lucky that we were picked to go on the rescue mission, but it certainly made a difference,” says Mulder.

Mulder and Fischer spent two days at the German base waiting for Rassolov to be moved from the Russian icebreaker to the nearby Norwegian base at Troll, about an hour from the German base.

“We finally loaded Seeberg in the DC3 plane and flew to pick up Rassolov, who was suffering a great deal of discomfort. There, we had to communicate with hand signals because of the language barrier,” says Mulder.

“It was really quite unusual, but we gave him pain medication, and made him as comfortable as possible. From there we headed back to Novolazarevskaya where we boarded the cargo plane once again for the return journey.”

It was only after they had taken off that they realised how difficult it was to monitor Seeberg in the noisy cargo plane, which is not soundproofed like passenger planes.

“We couldn’t hear the heart monitors, so we had to look at the movement of Seeberg’s chest and the colour of his face. But, fortunately, we were able to keep him stable until we arrived at the hospital,” says Fischer.

They landed on Sunday 21 December 2008, and both patients were immediately admitted to the Netcare Christiaan Barnard Memorial Hospital. Rassolov was operated on for his fractured ankle the next day, and Seeberg underwent a five-hour heart bypass operation two days later, on Christmas Eve.

While Seeberg was obviously not at his best, he was well enough to express his appreciation of the view of Table Mountain from his hospital bed.

“We were exhausted, but it was a most fulfilling and enriching experience,” says Mulder of the trip.

“It was really a wonderful experience,” agrees Fischer.  “The lowest temperature we experienced was -38º. And it was unbelievable to see that the sun never sets there in summer. We called it ‘no-man’s-land’ because it is so extremely quiet – in fact there are no animals that make any sounds.”

Both patients have been discharged and repatriated to their respective home countries.