Antarctica is the most southern, coldest, windiest, highest and most remote of the world’s six continents. A land mass almost completely covered in ice, it has no permanent inhabitants. But since the 1940s scientists have established stations on the continent to study the wildlife, the ice and the stars of the southern hemisphere.

South Africa was a staging post for some of the voyages made during the heroic era of Antarctic exploration in the years before the First World War, and the country’s direct involvement began in the 1950s.

The South African Antarctic Programme (Sanap) aims to increase our understanding of the natural environment and life in the area through research, science and technology.

Much of the South African effort on Antarctica is to protect this resource for future generations, and for the environmental health of the entire planet.

“Not only is this region a huge living laboratory, but it may hold the key to stopping global climate change, planetary weather and untainted biology,” says Dr Tshepo Seekoe, manager of DST’s science platforms unit.

South Africa’s Antarctic research focuses on the geosciences, physical sciences, life sciences, the impact of human presence in Antarctica, and the history, sociology and politics of SA’s long-term presence in the region.

Karoo rock in the Antarctic
South Africa’s connection with Antarctica dates to early Cretaceous times, some 115 million years ago, when the land masses which today make up Africa and Antarctica formed the Gondwana supercontinent.

Continental drift eventually caused Gondwana to break into the continents we have today. Curiously, this means South Africa’s current Antarctic base, Sanae IV, is perched atop a gigantic outcrop of Karoo dolerite – almost 5 000 kilometres from home.

SA’s direct involvement began when meteorologist Hannes la Grange took part in the first successful Trans-Antarctic Expedition of 1955 to 1958. La Grange went on to lead the first Sanae expedition, which established a permanent South African presence on the continent in 1960.

The Sanae 1 team took over Norway Station in Queen Maud Land, some 4 000km south of Cape Town, after the Norwegian Antarctic Expedition vacated it. A new base, Sanae I, was constructed in 1962, with Sanae II being completed in 1971 and Sanae III in 1979. Sanae III was used until the end of 1994.

The South African Antarctic bases
Unlike the first three bases, which were built on the Fimbulisen Ice Shelf, Sanae IV is some 200 kilometres inland on the continent itself. It has an entirely new design, standing above the surface on a nunatak or rocky outcrop known as Vesleskarvet.

The base was commissioned in 1997, with Sanae 36 being the first team to overwinter there.

Sanae IV is a well-resourced facility for the observation of natural phenomena occurring in the cosmos, in the atmosphere or the electromagnetic field surrounding the earth, as well as in the crust of the earth itself.

The aurora australis or southern lights light up the Antarctic sky behind the Sanae IV base (Photo: Beneke de Wet, SA Agency for Science & Technology Advancement)

Auroras, solar winds and the ozone layer are some of the subjects of this research, which has direct relevance to the world’s navigation and communication systems. Geological investigations help unravel the evolution of Gondwanaland, while meteorological and oceanographic observations provide clues to the process of climate change.

Plans are afoot for a major marine protected area around the Prince Edward Islands. This will be one of the largest areas of its kind in the world and will be patrolled by the 83-metre environmental protection vessel, the Sarah Baartman.

Gough Island is a British protectorate and is largely uninhabited, except for the people at the South African meteorological station, which operates as part of an agreement between South Africa and the UK.

Sanap
South Africa is one of the 12 original signatories to the 1959 Antarctic Treaty, which now has some 45 member nations. According to the treaty, all military activities on the continent are prohibited, scientific investigation and cooperation are encouraged and territorial claims are placed on hold indefinitely.

The treaty declares Antarctica to be a “natural reserve devoted to peace and science”. All activities on the continent are subject to strict environmental management.

Sanap plays a crucial role in conserving this living laboratory – the coldest, windiest and driest place on Earth. Studies done in the Antarctic are closely linked to our understanding of the entire Earth system; signals in Antarctica indicate past and future global changes.

Sanap helps safeguard the environment of the Antarctic and Southern Ocean and protect the integrity of ecosystems, both marine and terrestrial, in the region.

Funding of Antarctic research has come a long way since the Royal Society of South Africa presented a token £25 to Robert F Scott towards scientific work on his 1913 expedition to Antarctica.

South Africa’s funding of research connected to the Antarctic received a 30% boost in 2004/2005, and the Department of Environmental Affairs has committed itself to increasing its annual funding to R10-million in the near future.

Researchers in the social sciences (politics, international relations, and sociologists), humanities (literary studies, visual arts and cultural studies), law (Law of the Sea) as well as engineering can now participate in Sanap. The new research themes for Sanap are:

As a biodiversity hotspot, scientific activities in Antarctica, the islands and the Southern Ocean have never been more exciting, with research opportunities presented by: 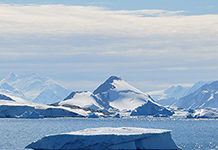