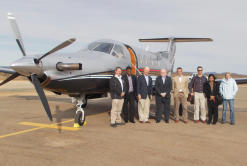 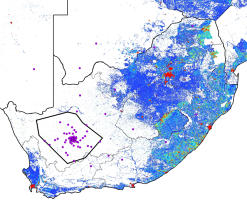 One of the reasons that the SKA is located where it is, is because of the low population density in that part of the country, resulting in little or no radio interference.
(Image: SKA) 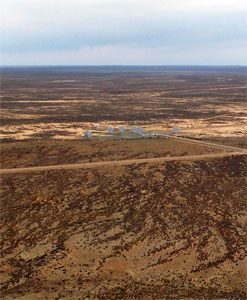 A view of the KAT-7 from the top of nearby Losberg, which acts as a barrier between the installation and the SKA admin and control site.

Justin Jonas and David Willetts gaze out over the MeerKAT core. Foundations for the 64-dish telescope are already being poured and the first dish is expected to be installed by the end of the year.
(Images: Janine Erasmus)

It’s all systems go at the Square Kilometre Array (SKA) site in the Northern Cape. There’s a brand new landing strip which will cut down on transport time to and from the site, and a whole host of new buildings going up. And there’s also the MeerKAT, the SKA precursor, which is under construction.

The all-weather landing strip will eliminate a couple of hours of travelling time, because it saves people having to drive from the airstrip in Carnarvon – about an hour each way – which was previously the case. Getting new equipment in will also be a lot easier.

It’s 1.3km long and 18m wide and is registered as a voluntary un-manned landing strip with the South African Civil Aviation Authority. It can accommodate 13-seaters and any smaller craft, but there is provision to upgrade the voluntary registration to a fully licenced landing strip, if larger aircraft should ever need to land.

On 11 September the UK’s minister for universities and science, David Willetts, was part of a delegation that touched down on the landing trip for the first time. He was accompanied by Sir Steve Smith, vice-chancellor of Exeter University; Dr Simon Berry, SKA expert from the UK’s Science and Technology Facilities Council; and Tim Moody, second secretary for science and innovation at the British High Commission.

While in South Africa, WIlletts signed an agreement with his South African counterpart Derek Hanekom, to strengthen collaboration between scientists in the two countries. The two ministers pledged their support for an initiative called the Scientific Seminar Scheme. Funded equally by both ministries, this programme will comprise a series of conferences and seminars that will bring together groups of early- to mid-career scientists from South Africa and the UK.

“It’s very exciting to see sub-Saharan Africa leading what is going to be one of the big science experiments of the next decade, and it’s going to be a great boost for science in South Africa and across the continent,” said Willetts, adding that he was impressed with the amount and quality of work that had been done on the SKA, as well as the speed with which the local team was working.

“Where we are will be the centre of the biggest science infrastructure in the world in a decade or so,” said Prof Justin Jonas, associate director for science and engineering at SKA South Africa. “Africa has already become a big hub for science.”

Easier to get there

Buildings around the site, which were quite sparse originally, are now springing up everywhere. One of the most important is the new Karoo Array processor building. This will house all the data processing racks, as well as the power and back-up equipment, required for MeerKAT. Because it’s so important to keep radio interference to a minimum, much of the processor building, including the data rack room and control room, will lie 5m below the ground. In addition, the data rack and control rooms will be shielded with steel panels over the walls and ceiling.

There will be 50 racks for MeerKAT and 80 for SKA phase one. “This is where the processing will be happening,” said Jonas. “The dishes themselves use relatively small amounts of power, but a lot of power will be going to the computers.”

He explained that the data rack room has to be completely shielded to prevent radio frequency interference affecting the incoming data from the telescope, and that the joins between panels will be examined with a device called a sniffer to ensure that the room is secure. If it’s not, the entire facility will be rendered useless.

The door alone will weigh 360kg and will be about 30cm thick. “The amount of force required to put the door in place is more than a person can muster, so it’s pneumatic.”

The data must be processed on the fly before it’s sent back to the office in Cape Town, said Jonas, because it would be too expensive to store it or send huge amounts of raw data down a fibre cable – “It’s best to put the computers where the data is,” he said. “They don’t need to be in the big city. We’re talking about data bandwidth that’s equal to that of a small continent.”

Another building that’s undergoing changes is the dish assembly shed. With its volume now more than double that of the original, the team can work on two dishes at one time. A pedestal integration shed is also nearing completion – this facility will allow for the addition of the pedestal and electronics, and pre-installation testing as well.

The 64-dish MeerKAT will be completed in 2016, and will then be the largest radio telescope in the world – until the SKA overtakes it. The team expects the first MeerKAT dish to be completed and installed by the end of 2013.

At the time of the site visit, five foundations had been poured. Laying a MeerKAT foundation is not the same as laying one for a building – it’s a complex structure that has to support a 19m-high antenna and keep it stable enough in strong winds to continue accurately gathering data, as well as protect it from lightning damage. Each foundation consists of 78 cubic metres of concrete and nine tons of steel reinforcement and has to comply with a set of rigorous quality standards.

The MeerKAT telescope is estimated to cost about R2-billion (US$204-million), but, said Jonas, the total budget is about R3.9-billion ($398-million) because of all the other components, such as the highly successful human capital development programme.

MeerKAT will be followed by the first phase of the mid-frequency SKA component, which will be located in the area where KAT-7 and MeerKAT stand, and will comprise the existing dishes plus an extra 190.

“SKA phase one extends out for about 100km or so,” said Jonas. “It’s expected that phase one will go operational in 2018, or perhaps a bit later.”

Phase two of the SKA will extend further out into the African partner countries, and will also see low-frequency components coming online in Australia and New Zealand.