The Venturi electric vehicle taking off from
the Nairobi headquarters of the UN
Environment Programme.
(Image: Venturi Automobiles) 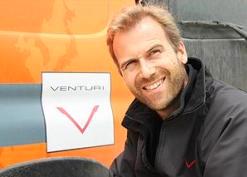 An electric vehicle has begun an unassisted 5 000 kilometre-journey from Nairobi, Kenya to Johannesburg, South Africa – an expedition designed to showcase the endurance of battery-powered vehicles and promote green energy use.

The driver, electric car campaigner Xavier Chevrin, left on 11 May after a send-off news conference at the Nairobi headquarters of the UN Environment Programme (UNEP).

“We want to break the clichés of electric-powered vehicles,” Chevrin said, “and show that they have a range of uses.”

Without any backup, Chevrin will head south through Tanzania, Zambia, Zimbabwe and Botswana, before finishing in Johannesburg in late June.

It follows a 2010 journey by the adventurer, which saw him driving 13 400 kilometres from Shanghai to Paris in a similar van, in the process setting up a record for the longest journey ever made in an electric vehicle.

The vehicle is a bright orange Citroen Berlingo powered by technology developed by French electric car specialist Venturi and is the first such vehicle to make a trans-Africa trip. Chevrin said the six-nation trip would show that electric cars could travel long distances, and were not only for use in the city.

The Berlingo will recharge its batteries at electric sockets along the way. It carries three aptly-named Zebra nickel sodium chloride batteries – two more than standard Berlingos – each of which has a capacity of 23.5 kWh, giving the car a total of 70.5 kWh.

As with the Shanghai-Paris trip, Chevrin will trust in encounters with local people to recharge his batteries. He plans to use these random meetings to engage with ordinary Africans, inviting them on board the vehicle and showing that clean technology is a vital part of the world’s future energy sources.

“The successful completion of such a journey depends not only on incredible performances from a machine, but also the people you meet throughout the entire trip,” Chevrin said.

“Without any backup or pre-planned stopovers, you have to rely on chance encounters, hoping to progress each day from one point to the next.”

However, one of Chevrin’s big challenges will be limited access to electricity, and the possibility of frequent power cuts in rural Africa. The car has no backup generator, so should he run out of power he will be stranded, adding to the scale of the adventure.

“Here in Africa is going to be the toughest so far because of the problems of power supply,” Chevrin said.

The Berlingo can cover 500 km (300 miles) without recharge at a maximum speed of 110 km/h (68 mph). Recharging the batteries from scratch will take seven hours.

The vehicle also features a raised suspension to cope with bumpy roads.

This journey is one of the Venturi Global Challenges, a series of technological and human challenges with the aim of demonstrating the company’s leadership in the field of electric propulsion. Each challenge takes place on a different continent in extreme conditions.

Another expedition is being planned to drive an electric-powered vehicle from the edge of Antarctica through the snowy wilderness to the South Pole.

Called Mission Africa, the journey is supported by the Prince Albert II of Monaco Foundation and is part of the UN International Year of Sustainable Energy for All, a global initiative led by the organisation’s secretary-general Ban Ki-moon to urge all sectors of society to contribute to improving energy efficiency, doubling the amount of renewable energy produced, and enabling more people to access modern energy services.

“We have been using combustion engines for over a century, but now it is a new revolution,” Chevrin said. “Within a few decades it will be logical for everyone to have an electric car as it fits with the philosophy of having to be careful how we use energy.”

According to UNEP’s soon-to-released flagship report on the state of the environment, the Global Environment Outlook 5, the current fossil-fuel based transport system accounts for 25% of all greenhouse gas emissions. This figure is expected to rise to almost one third in the coming decades.

Zero emissions are kind to the environment

Chevrin pointed out that the electric vehicle puts out zero emissions and is much cheaper to run than petrol-fuelled cars. The Shanghai-Paris trip cost less than US$200 (R1 700) in electricity, compared to the $4 000 (R33 600) it would have cost to use diesel, Chevrin said.

“We want to prove that electricity is an alternative energy source that can be used for transportation,” he said.

South Africa’s own locally-developed electric car, the Joule, was on display during the recent COP17 climate change conference held in Durban. The car was shown off at the Climate Change Response expo from 28 November to 9 December. The car’s developer Optimal Energy had three fully functioning prototype vehicles on display in three different exhibition halls.

Although the company is currently experiencing difficulties in financing the Joule’s continued development and the project is now on hold, it is still determined to bring the electric car to the South African market. But for now, Optimal Energy’s new focus is on electric buses for public transport.