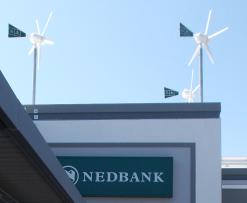 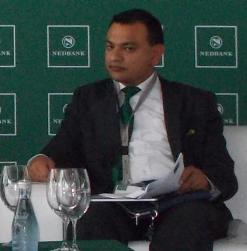 The sleepy Cape Flats suburb of Lansdowne now boasts an African first – a bank branch entirely off the power grid. The new-look Nedbank branch, in Lansdowne Corner shopping centre, opened at the end of October and, said the banking group’s Western Cape regional manager Pedro Rhode, is an important lesson in greening and sustainability for the bank.

“We are extremely proud that this is the first off-the-grid branch in Africa,” he said. “Two years ago we achieved a 30% saving; now we’ve taken it to 100%.”

In 2011 the Nedbank branch in the small community of Du Noon in Milnerton, Cape Town, opened with one wind turbine supplying 30% of its power. The Lansdowne branch is powered by a hybrid system of three small turbines and an array of solar panels, making it entirely self-sufficient, although it can draw Eskom power in an emergency.

In the months since it opened, Du Noon has prevented the release of 6.8 tons of greenhouse gas into the atmosphere, and the burning of almost seven tons of coal. The Lansdowne branch will top that – it’s expected to offset the country’s carbon dioxide emissions by 71 tons a year.

There are no plans to convert Du Noon to complete dependence on renewable energy yet. The branch’s turbine was installed for a different reason – to lessen the disruptive effect of power outages in the area.

But the Nedbank team hopes the Lansdowne model will serve as inspiration for other businesses around the country, especially in rural areas where access to power is erratic or nonexistent.

The hybrid system is so efficient it will sometimes generate excess power, which will be either diverted to the shopping centre for parking lot lighting and security systems, or pumped into the power grid.

The system is fitted with a two-way meter that monitors power coming in and going out, instead of a single meter measuring consumption. Since the system went live, Eskom power intake has been measured at exactly 0kWh. It is capable of supplying the branch’s entire annual requirement of 70 000kWh – power enough to sustain six middle-income homes.

“We can’t carry on consuming coal,” said Nedbank’s Ciko Thomas, the managing executive for consumer banking. He added that South Africa has to change the “bad reputation” it has from its dependence on coal, and that a greater focus on renewable energy is the solution.

“Nedbank is taking responsibility for its energy consumption, and although we are notching up a few firsts in these areas, it’s not so much about the firsts themselves, but rather about being a leader in sustainability.”

The turbines are manufactured by Kestrel Renewable Energy, located in Port Elizabeth.

The original plan was for the system to have larger turbines and fewer solar panels. Logistic problems, such as having to install power cables running through the car park, prompted a rethink: there are now three small turbines and a bank of 168 solar panels. 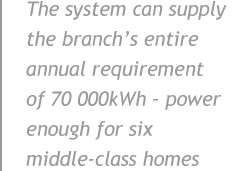 The turbines – model E160I, the smallest produced at the Port Elizabeth plant – each produce 600W of power, so 1 800W comes from wind. The solar panels produce 245W of power each, meaning that the total generating capacity of the hybrid system is around 42kW.

“The wind is relatively consistent throughout the year, with a peak in July,” said Carpy. “It complements the solar perfectly, as this drops off during the winter months, so this is a very good site for a hybrid system.”

There were some problems – ideally a solar system should face due north, to expose it to the maximum amount of sunshine during the day. The roof of the Lansdowne shopping centre is 10 degrees off due north, so in the morning the collection is a little less than ideal, but, said Carpy, in the afternoon the panels collect a little more energy so it evens out.

The roof itself was a challenge. It was initially unable to support the weight of all the panels, so specialist structural engineers were brought in to give advice and design extra holding strength.

Another snag came from street lights next to the centre, which cast a shadow over a few of the panels.

“Because solar panels work in series,” said Carpy, “if a shadow is cast over even one of the panels you lose the whole bank, so the frame had to be moved back a bit.”

The installation was planned to take eight to 10 weeks, but because of the unexpected delay with the roof, it took about four months altogether. The total investment into the system was R1.8-million, with an operational cost outlay of about R200 000. This should be recouped within two years, as the annual saving amounts to R121 000. The wind components of the system are designed to last for at least 20 years, and the solar components for 25 years.

The launch of the Lansdowne Corner renewable energy system was accompanied by two community sustainability outreach projects involving Belmore Primary and York Primary schools in the surrounding area. They were given vegetable tunnels and rainwater harvesting tanks, as well as sustainability workshops, allowing them to grow their own food.