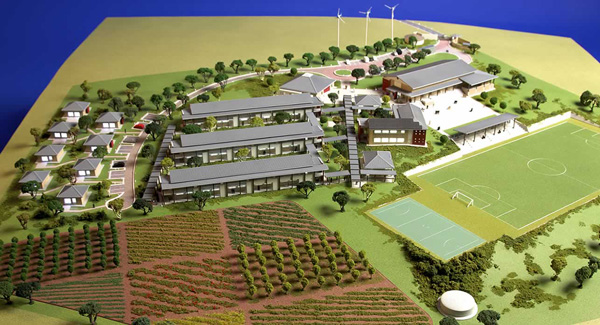 An artist’s impression of the new science and technology high school in Mvezo, Eastern Cape. Click image for a larger view. (Image: Mandela School of Science and Technology)

The first high school to open in the rural village of Mvezo, Nelson Mandela’s birthplace, is a state-of-the-art school dedicated to science and technology. The modern campus, set on the banks of the winding Mbashe River deep in rural Transkei, is the fulfilment of a promise Siemens chief executive Peter Loescher made to Mandela in 2010.

Cutting the ribbon at the opening on Friday 17 January, President Jacob Zuma said that the Mandela School of Science and Technology was a dream fulfilled for Madiba. Madiba was Mandela’s clan name and the name by which he was fondly known; his official title was Nkosi Dalibhunga Mandela. Just as he was able to convince American businesswoman Oprah Winfrey to spend her own money to establish her Leadership Academy for Girls, Zuma said, he convinced the European technology giant’s Loescher to build a school in Mvezo.

In his speech, Zuma told the incoming students: “Madiba had to travel far to obtain secondary education because there was no secondary school in this area. Siemens has ensured that the children of Mvezo receive a state-of-the-art science and technology school that Madiba did not even dream of way back then.”

Siemens spent R98-million on the construction and will be responsible for the running costs of the school for the first three years. It will accommodate 700 students from 22 feeder schools in the Eastern Cape. The cream of the region’s high school science talent will be tutored at the leafy campus and have access to computer and science labs, a library and resource centre, and well-maintained sports and recreation facilities.

The first year’s intake comprises 400 students in grades eight to 10. 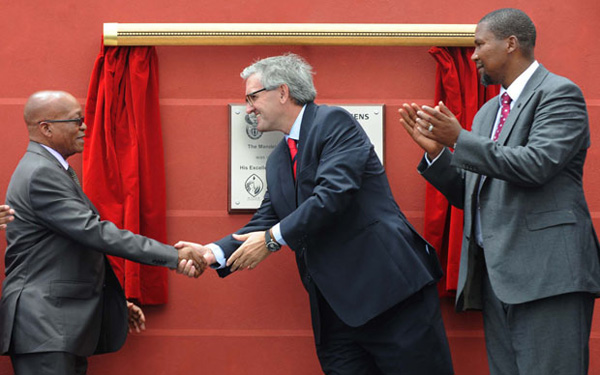 The school’s colours of green and orange were inspired by the indigenous aloe. Its emblem, designed by Siemens with input from the local community, is a wind turbine set on a traditional Xhosa battle shield. The turbine blades divide the shield into three fields. The top section represents the village of Mvezo, and the left and right sections highlight the science and technology focus of the school. The school motto, developed by local community members, is: Education is freedom. It was inspired by Mandela’s words: “Education is the most powerful weapon which you can use to change the world.” 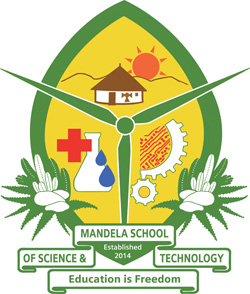 The crest of the Mandela School of Science and Technology. Click image for a larger view.

Siegmar Proebstl, Siemens Africa chief executive, said that beyond the importance of building a world-class school where none existed, the project was socially rewarding as well. Using Siemens water filtration technology, the school will supply clean water for its own use, and for the surrounding community. In a nod to sustainability, building materials were sourced from the surrounding area, and the sun will be harnessed to light the resource centre and the external lighting. As part of the education programme, students will be trained, alongside members of the Mvezo community, to maintain the technology.

“We are a technology company focusing on technology solutions. The learners in the school will be exposed to this cutting-edge technology and will hopefully get excited about technological solutions and the fascinating world of engineering. South Africa and the rest of the Africa needs engineers to find answers to the continent’s infrastructure challenges and to create jobs,” Proebstl explained.

Altruism and a desire to celebrate Madiba’s legacy are not the only reasons for the school’s existence. Siemens, like other corporations, struggles to find qualified South Africans to fill vacant posts in the country. As many as 600 engineering and technology posts at Siemens have gone unfilled because South African graduates do not have the skills levels to step into employment. For this reason, the company has sought to invest in educational initiatives.

Explaining the large investment in Mvezo, Rita Nkhulu, Siemens South Africa head of corporate strategy and the project leader for the school, told Business Week: “There are lots of students coming out of school with grades that are really not up to par.”

Conceding that there were still challenges to be faced in the teaching of science and technology, Zuma thanked Siemens for its vision. He said co-operation between the government and the private sector was the best way forward. “We appreciate the support from the private sector in our quest to improve the quality of education in the country.”

As his speech drew to a close, Zuma reminded the learners of the responsibility they had as the first students at the Mandela School of Science and Technology. They were being trained to be the leaders of tomorrow and had to honour the memory of the greatest South African, whose name was on the wall above the entrance.

The school falls under the government’s Accelerated School Infrastructure Delivery Initiative, an R8.2-billion public-private initiative that aims to eradicate the 496 “mud schools” and provide water and sanitation to 1 257 schools and electricity to 878 schools by March 2016.