Physicist Sandile Ngcobo will feature in the next instalment of Brand South Africa’s Play Your Part TV series, to be aired on Sunday 20 July at 9pm on SABC2. 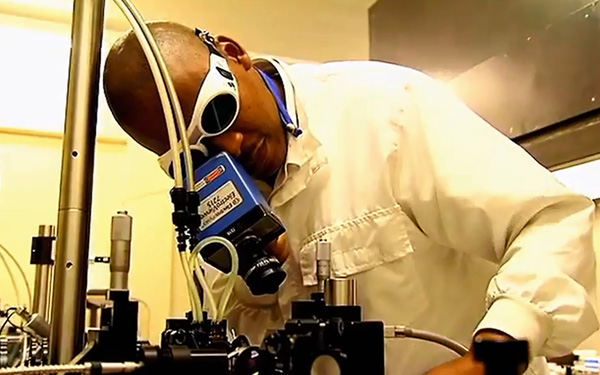 Sandile Ngcobo at work testing the digital laser at the CSIR laboratory in Pretoria. (Image: Screengrab via YouTube)

Breakthrough experimental work by University of KwaZulu-Natal scientist Sandile Ngcobo as part of his PhD research has led to the development of a world-first digital laser set to open up revolutionary new technologies for medicine, communications, manufacturing, product development and more.

Ngcobo was a key part of the team at the Council for Scientific and Industrial Research’s National Laser Centre that demonstrated that, instead of resorting to expensive optics or other special mediating devices to control the shape of the light coming out of a laser, laser beams can be digitally controlled from inside the laser device itself. The team’s findings were published in the prestigious journal Nature Communications in 2013 under the title “A digital laser for on-demand laser modes“.

“This is what is often termed a breakthrough – and it is a real breakthrough,” Dr Igle Gledhill, president of the South African Institute of Physics, said of the technology.

“The digital laser opens up new visions of laser applications: and there are uses that we haven’t even thought of yet. In that way, it’s very much like just like the original invention of the laser over 50 years ago.

“Seeing world firsts come through from labs in South Africa is a joy shared across the scientific community, especially when young students are involved in this hands-on way.”

Laser technology – the word is an acronym for “light amplification by stimulated emission of radiation” – permeates modern life. Lasers are used in lighting displays at concerts, in barcode scanners in shops, in DVD players at home, in printers at the office, in surgical equipment in hospitals and in precision manufacturing machines in factories.

Laser devices consist of mirrors, light and a casing containing a medium such as crystal or glass. The medium changes the frequency of the light to create a laser beam with the perfect characteristics for these different applications.

In conventional lasers, the shape of the emitted light is either not controlled at all, or a single shape is selected by expensive optics. During surgery, for example, the beam must be finely focused for precision cutting.

But with the new technology, the laser light can be shaped using a spatial light modulator – a liquid crystal display (LCD) that can be digitally manipulated with grey-scale images representing the desired change to the light. The CSIR team demonstrated for the first time that this can all be done inside the laser device.

“Our digital laser uses the LCD as one of its mirrors that is fitted at one end of the laser cavity,” said Professor Andrew Forbes, who led the research team. “Just as with LCD televisions, the LCD inside the laser can be sent pictures to display. When the pictures change on the LCD inside, the properties of the laser beams that exit the device change accordingly.

“This is a significant advancement from the traditional approach to laser beam control, which requires costly optics and realignment of the laser device for every beam change. Since this is all done with pictures, the digital laser represents a paradigm shift for laser resonators.”

Announcing the breakthrough at media briefing in August 2013, Derek Hanekom, then the minister of science and technology, said it was evidence of the South Africa’s potential for scientific innovation.

“That the world’s first digital laser should come from our country is testimony to the calibre of scientists that South Africa has,” he said.

“As early as 1900, physicists, including Albert Einstein, were studying the relationship between energy and the frequency of radiation, but it was only in 1960 that laser technology was developed, while the acronym “laser” was coined in 1967.

“It is therefore extraordinary that scientists from South Africa from today onwards will be mentioned alongside Albert Einstein as contributors in the history of the laser. Actually, they have taken this technology forward; hence we say this innovation is ground-breaking.”

In his work at the CSIR’s laboratories in Pretoria, Ngcobo programmed the LCD to play a video of a selection of images representing a variety of desired laser modes. The result was that the laser output changed in real time from one mode shape to another.

Ngcobo said he believed the digital laser would prove to be a “disruptive” technology. “This is technology which may change the status quo and which could create new markets and value networks within the next few years or decade.”

Team leader Forbes said the development created huge potential for future technologies. “The dynamic control of laser modes could open up many future applications, from communications to medicine. Our device represents a new way of thinking about laser technology, and we see it as a new platform on which future technologies may be built.”

“To Prof Forbes, Sandile Ngcobo and the rest of the team, a very big congratulations,” Hanekom said at the announcement. “With the 21st century being touted as the century of the photon, with the photonics revolution in which the laser is a key enabling technology, your work has secured a place for South Africa right at the forefront of developments in laser research.”