“We should reach out to each other.” This was the message Graca Machel, global activist and widow of South African statesman and international icon Nelson Mandela, brought to the launch of this year’s Mandela Day at the Dr Mathole Motshekga Primary School in Tembisa, a large township east of Johannesburg. Machel said to the gathered students and dignitaries that, as her late husband believed, every single human being deserves a life of dignity.

Mandela Day is held annually on 18 July, Mandela’s birthday. This year the focus will be on education and literacy, food security, shelter and the environment. The Nelson Mandela Foundation is urging South Africans and international supporters to help establish food gardens, read to children, paint schools and support recycling initiatives run by young people. 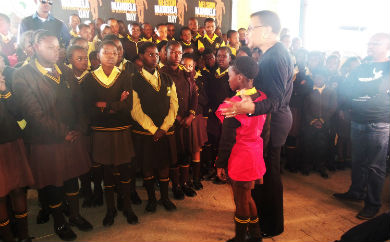 Motshekga Primary School in Tembisa, urging them to do their best in their schoolwork.

Nelson Mandela Day is a global event, officially declared by the UN in November 2009. On this day, the UN and the Nelson Mandela Foundation call on people across the world to devote 67 minutes of their time to helping others. This is seen as a way to celebrate the spirit of South Africa’s great humanitarian.

A 2009 United Nations press statement explains: “For 67 years Nelson Mandela devoted his life to the service of humanity – as a human rights lawyer, a prisoner of conscience, an international peacemaker and the first democratically elected president of a free South Africa.”

Machel said Mandela Day was a reminder of our duty to improve the lives of those less fortunate than us. “There is no end in doing better. We have to do it again and again.”

She said while we can all do good individually, doing good in a movement, with others, had a bigger impact. “We, together, have the responsibility of making the country a better place to live.”

The spirit of active citizenship

As part of its mandate to build pride, patriotism and a spirit of active citizenship, Brand South Africa is a key partner of Mandela Day, supporting it with the Play Your Part programme. The initiative recognises the power of young people to spur the country’s social and economic development. Play your Part celebrates South Africa’s spirit of Ubuntu and commitment to human development, as outlined in the National Development Plan.

“Mandela Day is an initiative dedicated to giving back to those less fortunate, the vulnerable and marginalised in our society,” Kingsley Makhubela, chief executive officer of Brand South Africa, said in a press release. “In fact, Mandela Day actively encourages service to others, just as Madiba himself gave many years of his life in service to humanity.”

Mandela’s nickname “Madiba” is his clan name, as the Nelson Mandela Foundation explains. A clan name is more important than a surname, as it refers to an ancestor. The original Madiba was a Thembu chief who ruled in the Transkei, today part of South Africa’s Eastern Cape province, in the 18th century.

“The nation and the world remembers the profound and lasting impressions of Madiba, who is recognised and celebrated as an icon for racial equality and freedom,” Makhubela said. “South Africans are encouraged to play their part towards positive change by building their communities and upholding a spirit of Ubuntu and social cohesion.”

A school built by a community

According to Sello Hatang, chief executive officer of the Nelson Mandela Foundation, Dr Mathole Motshekga Primary School was chosen for the launch because the community
there built it themselves. “They saw a need. They didn’t wait for somebody else to do something,” he said. Locals, he added, even contributed to teachers’ salaries.

Hatang said Mandela Day should inspire change every day, not only during the 67 minutes on 18 July. “We want to say to the community of the school: ‘You began the process. Don’t stop!'” 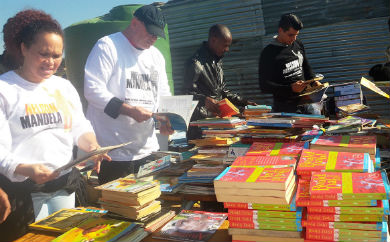 Volunteers at the launch sort books donated to primary school’s library, while others put up bookshelves and spruce it up with a coat of paint.

The school, attended by 1 601 children, is named after Mathole Motshekga, a South African politician, lawyer and former premier of Gauteng province.

Principal Tabitha Kulima said that in celebration of Mandela Day volunteers will tile and paint classrooms, renovate the library, extend the school’s food garden and plant trees. These improvement will be complete by 18 July. At the launch, the school was also given a donation of food and books.

Also helping out at the launch were actors from the South African soap opera Isidingo: The Need, and representatives from private companies Tiger Brands and Procter & Gamble, and the NGOs Food and Trees for Africa, and Stop Hunger Now.

Izak Davel, who plays the character Bradley in Isidingo, said he was happy the focus of the launch was on children. “There is so much negativity going on in this country. We as adults are moaning most of the time. How can we expect the children to be positive about things?”

Davel was also glad the volunteers at the launch were leading by example. “In life, many of us are caught up in working to survive, to provide for our children. We forget sometimes that there are other people who need love and other necessities.”

He said he played his part by showing love every day, with little acts of kindness like helping an old person cross a street. 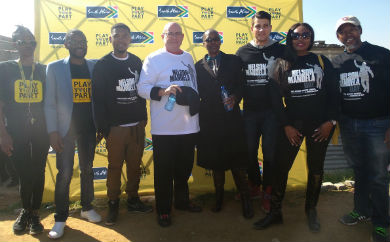 Lindani Nkosi, Isidingo‘s Lincoln Sibeko, said Mandela Day should encourage us all to discuss the importance of reconciliation, hope and unity. “A day like this gives hope to the children. It gives them hope in seeking help in various areas. Our participation strengthens the sense of hope.

“It shows them that there is someone taking care of them and that things are happening for them. Hope would be the driving thing for me this Mandela Day.”