Discussions at The Future of Education Summit included a focus on higher education and the Fourth Industrial Revolution. It was the third iteration of the annual gathering.

Melissa Javan
Regulations and investment in education by the public and private sectors were among the topics on the agenda at The Future of Education Summit.

Rakesh Wahl, co-founder of ABN Group and founder of the summit, welcomed guests to the gathering. He said there was a diverse group of speakers that included people from local and international universities. Held on 29 November 2017 in Sandton, it was the third annual summit.

Challenges that needed to be addressed in education included overcrowding, underfunding and quality concerns, Wahl said.

Gauteng Premier David Makhura was the opening speaker, and the keynote speech was given by former public protector Thuli Madonsela.

Advocate Madonsela said education was a leveller. Had it not been for education, she would have followed in her mother’s footsteps – become a domestic worker and then an informal trader.

She also spoke about the support systems students needed, giving by way of example a student whose registration fee of R5,000 was paid by members of his community. He had neither books nor accommodation, and lived in a bathroom for disabled people while studying.

While financial support was important, emotional support also needed to be given. While she was studying at Harvard University in the United States, said Madonsela, professors regularly phoned her to ask how she was doing.

“What support systems do we bring into this when you bring students to university?” she asked, urging those that gave scholarships “to not have strict criteria for students to pass”. Years ago, a pass would be enough but nowadays students needed a certain percentage to pass when they had a scholarship.

Madonsela also encouraged South Africans to find local companies to create and fix their tech hardware, such as computers.

Guests tweeted comments from the summit:

Advocate @ThuliMadonsela3 says we disempower our children by training them to be seekers of jobs, when we should be equipping them to be creators of jobs. This will ensure continued economic opportunities. #FOESummit2017 #sabcnews pic.twitter.com/MiawglZGrc

Education should prepare our youth to be able to solve world problems and not prepare them only for a job. @SPARKSchools #FOESummit2017

Education must be adapted to meet the needs of technological advancements which are re-shaping the business landscape. Africa should incorporate some of the best international trends into our curricula #FOESummit2017 pic.twitter.com/l5PsZ98gtQ

We need to expand the technology and reduce the cost of data for students.
Also, the access and downloading of intellectual property is important. – Dr Hershel’s Narsee#FOESummit2017

“We have to educate young and old people for what’s coming [in terms of the Fourth Industrial Revolution],” said Prof Tshilidzi Marwala, vice-chancellor of the University of Johannesburg. “We need to train people for skills they might use in the future.

“It would be expensive to do so.”

In terms of blended education, he said 4,500 of the 50,000 students at his university were from outside South Africa. “We want our local students to interact with other students on how they approach problems.”

Dr Hersheela Narsee, director of research co-ordination and policy support in the Department of Higher Education and Training, said technology was going to be key for the future. We must facilitate online learning better.

“About 42% of students study through distance education in South Africa.”

Access to laptops and data was important for these students, she said. “Reducing the cost of data is one of the issues we have to address with the private sector.”
Narsee also said the department was keen to develop open learning resources that would give students access to data.

Prof Seth Kunin, deputy vice-chancellor of the International Curtin University, said the way education was delivered was going to change. He spoke about online learning being the future and said: “It won’t be passive, it will be active.”

The higher education curriculum should not only be fit for industry, the professor added. “People should be trained to be creative and to be creators of knowledge, to be innovators.” 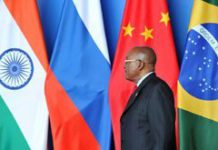 BRICS ‘can contribute to African stability’