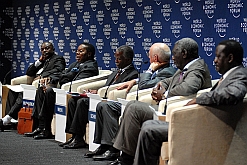 South Africa’s new president, Jacob Zuma, will play host to the world’s economic leaders when he welcomes them to the 19th World Economic Forum on Africa, taking place in Cape Town in June 2009.

The theme of the summit is Implications of the Global Economic Crisis for Africa. Over 700 prominent figures from Africa and the world will gather to discuss ways in which the continent can address the challenges posed by the current financial meltdown, which has taken its toll on many economies.

Analysts have said that Africa may be in a better position to weather the storm, as the continent has not integrated as deeply with the global economy as have other, more developed regions. Wealthier African countries, which have greater exposure to world markets, would however feel the pinch more severely.

With South Africa hosting the 2010 Fifa World Cup, the global football tournament will also feature conspicuously on the agenda. A whole day has been dedicated to discussion of the social and economic impact of the long-awaited event, which is expected to contribute billions to the economy of the Southern African region.

A visit to Cape Town’s Green Point stadium, a World Cup venue, forms a part of the day’s proceedings.

“We are investing all our energies and resources to make a success of the tournament,” said Zuma, adding that he was privileged, on behalf of his country, to host so many eminent political and economic global leaders.

“It means our country continues to have a special place in the hearts and minds of the international community,” he said.

Participants at this year’s World Economic Forum on Africa will discuss the development of a new strategy for Africa’s prosperous future.

The Africa Competitiveness Report 2009 is to be unveiled at the meeting. The report is expected to provide a platform for discussion around the impact of the financial crisis on Africa’s traditional growth drivers, such as infrastructure development, demand for oil and other valuable commodities, and inbound foreign capital.

Participants will take into consideration other important social and environmental issues that affect Africa, including healthcare, education, food security, and climate change. They will deliberate on the current investment climate, as well as practical ways to boost better governance and business practices, to expand trade, and to increase domestic and foreign investment across the continent.

Zuma is no stranger to the World Economic Forum. As well as attending the annual meeting in Davos, Switzerland, for over 10 years, he has been present at previous Africa and Middle East regional meetings.

In 2002 he addressed the forum with a presentation titled The role of African Governments in Poverty Reduction, Health and Education. Zuma was still deputy president to Thabo Mbeki at the time, only to be stripped of the position by Mbeki in 2005 because of corruption charges related to the controversial 1999 arms deal.

In his World Economic Forum speech Zuma outlined the challenges faced by developing African nations in achieving sustainable growth. Diseases such as HIV and Aids, malaria and tuberculosis, as well as drought-induced famine, and wars, were all problems that needed focused attention.

Zuma also mentioned a number of developmental targets, set out at the 1998 Tokyo International Conference on African Development, aimed at reducing poverty, boosting education, and providing basic services such as safe drinking water and sanitation. The Tokyo conference addressed the unacceptable numbers of women living in poverty, and set a goal of reducing this number by two-thirds by 2015.

The New Partnership for Africa’s Development (Nepad), said Zuma, was the blueprint with which African governments would turn the desperate situation around, making use of Western partners and multi-lateral agencies.

Nepad upholds a number of objectives, among them the eradication of poverty and inequality in Africa; the furthering of sustainable growth and development; Africa as a competent player in the global arena; empowerment of women; creation of a favourable environment for investment; and the formation of partnerships with developed countries.

“For the African governments,” said Zuma, “there is a need to do things in a new way; politically, economically socially and in many other spheres.”

A former goatherd from the Zulu nation, Jacob Gedleyihlekisa Zuma was sworn into office on 9 May, almost 15 years to the day after Nelson Mandela became the nation’s first democratically elected leader. Mandela’s inauguration took place on 10 May.

South Africa’s fourth general election, held in April 2009, saw the ruling African National Congress (ANC) again sweep to victory, although not in as grand a style as before. The ANC lost its two-thirds parliamentary majority and with it, the right to unilaterally change South Africa’s constitution.