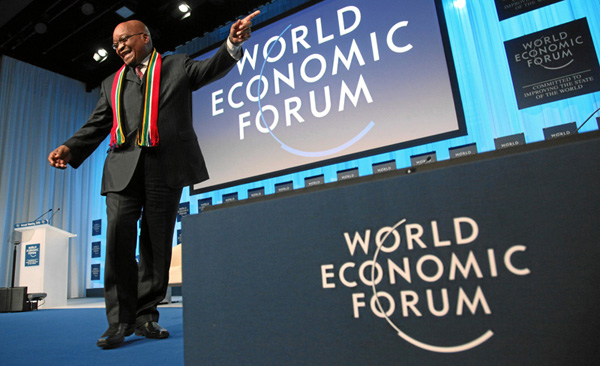 South African President Jacob Zuma at the World Economic Forum meeting in Davos in 2010. Zuma will not attend this year’s event, but South Africa will still be well represented by government ministers, heads of major corporations, and leaders in the media, arts, education and social investment. (Photo copyright World Economic Forum)

“South Africa is easy to sell. Our country is successful, with lots of potential.”

At a send-off in Johannesburg on Thursday for members of the high-powered Team South Africa set to represent the country at the World Economic Forum’s (WEF) annual meeting in Davos next week, President Jacob Zuma urged them to take every opportunity to promote South Africa to the world.

Zuma described the WEF meeting as “one of the foremost marketing opportunities for nations and business around the world” – “a good opportunity for us as South Africans to share ideas on how to present our beautiful country”.

Work pressure at home and the upcoming national elections mean Zuma, for the first time since he became president, will not attend Davos. But the members of Team South Africa who will be there include government ministers, heads of major corporations, and leaders in the media, arts, education and social investment.

But Davos is not only about marketing – it’s also a forum for leaders across the world to share ideas on how to make a better future. Zuma said Africa’s interests must not be neglected.

“WEF is an excellent platform for engagement on world issues, in particular to promote a more equitable economic world order,” he said. “It is also an important platform to flag, on the world stage, issues that are of concern to the African continent and to push the African agenda in general.”

Zuma stressed South Africa’s selling points: the achievements made since democracy in 1994, the country’s potential as a stable and developing investment destination, the fight against joblessness, and the opportunities promised by the National Development Plan and New Growth Path.

“We are pleased that all of us put our country first when we are in Davos and sell South Africa. And indeed there is a lot to communicate about our country. There are achievements we can speak of as South Africans which will generate confidence amongst investment partners.”

He also paid tribute to former president Nelson Mandela, who died in December.

“Our founding president, tata Nelson Mandela, and the first democratic administration laid a firm foundation and we continue to build on that foundation to take the country forward,” he said. “We remain a nation at work for a better life, striving each day to do better.”

Zuma said it is “indisputable” that South Africa was a “much better place than it was before 1994”. “Since 1994, five million more people are employed, with total employment at 14-million people. Obviously we want more jobs, which is why the partnership with the private sector, labour and community organisations remains critical to create the right environment.”

He also raised the National Development Plan and New Growth Path, which outline the objectives and work required for South Africa to achieve significant socioeconomic development and growth by 2030.

“The New Growth Path identifies six critical job drivers, which we are promoting for investments. These are agriculture, mining, tourism, the green economy, manufacturing and infrastructure development,” Zuma said.

“As you engage the world you will be able to say we know exactly where we want to be by 2030 and we are working very hard to get there as South Africans.”

Zuma ended with some advice to delegates: “For those of you who will be going to Davos for the first time, do not forget your snow shoes and very heavy coats,” he said. “It can be very cold over there, in the literal sense!

“We know that you will all represent the country well. We wish you all the best.”