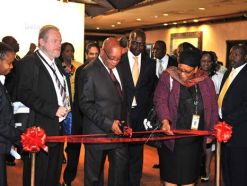 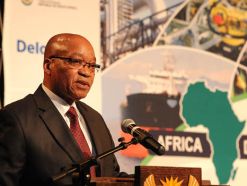 President Jacob Zuma speaks at the
opening of the 4th Trade and Investment
Conference and Exhibition 2012 held
at Sun City.
(Image: GCIS)

Major shifts in governance, trade, infrastructure and demographics will turn Africa’s emergence over the past decade into a sustained economic lift-off, South African President Jacob Zuma said at the International Trade and Investment Conference in North West province on Wednesday.

Addressing a high-profile gathering of local and international government and business representatives gathered at the Sun City resort for the two-day event, under the theme “The African Dialogue“, Zuma noted that six of the world’s 10 fastest-growing economies were now African, and that the continent had grown faster than East Asia in eight of the past 10 years.

‘Some executives are still missing the signals’

“But despite all the good news, companies have been slow to enter Africa,” Zuma said. “Some executives are still missing the signals. Others question whether Africa’s surge is just the result of a one-off lift by the global commodities boom, or whether it is really a sustained economic take-off.”

Zuma said there would be no stopping the rise of Africa – particularly if Africans themselves accepted the fact that their continent was changing. “They must release themselves from the shackles of self-doubt and celebrate these new developments.”

Zuma cited a 2010 report by the Mckinsey Global Institute, which found that natural resources explained only a part of the African success story, accounting for about a quarter of the continent’s GDP growth from 2000 through 2008, while other industries, particularly manufacturing and services, contributed the rest.

Other, more recent developments in infrastructure and trade meant there would be no going back for Africa.

“Firstly, the African Union (AU) has taken a conscious decision about integration and to promote intra-African trade,” Zuma said. Costly barriers were holding intra-African trade down at around 10% – less than half the level of other emerging market regions.

“Creating larger regional markets will increase specialisation and competition and boost manufacturing,” Zuma said, noting that a continental free trade area is being established, while at a regional level, a free trade area, bringing together Comesa, the SADC and the East African Community would soon create a market of 26 countries, with a population of about 600-million people and a combined GDP of R7.9-trillion (US$1-trillion).

At the same time, infrastructure developments currently under way would remove one of the main factors inhibiting continental trade, integration and economic development.

“It has been calculated that if the continent continues to narrow its infrastructure gap, economic growth will receive a further large boost – perhaps by as much as 2 percentage points a year,” Zuma said.

In view of this, the AU had set up a continental committee of eight heads of state to champion infrastructure projects at the highest level.

South Africa was also chair and champion of the North-South Road and Rail Corridor project, which will upgrade road, rail, power and port facilities, as well as simplify cross-border regulatory procedures, across eight countries in eastern and southern Africa.

“The projects have already passed the feasibility studies phase and should be at the implementation phase by 2016,” Zuma said.

Africa was now able to spend about R575-billion ($72-billion) a year on infrastructure, Zuma said, but there remained a R3.8-trillion ($480-billion) shortfall over the next decade to provide for water, power and transportation needs, “and there is much scope for private participation and investment in this area”.

There were further factors supporting a sustainable long-term lift-off in Africa, Zuma said, including the continent’s demographic composition.

“In 2010, 42% of Sub-Saharan Africa’s population was younger than 14 years old. By 2050, the continent will be home to one in five of the planet’s young people and will have the world’s largest workforce of 1.2-billion.

“While other regions rapidly age, Africa will enjoy a demographic competitive advantage of young, energetic and increasingly educated workers to power the continent’s services and manufacturing sectors.”

The growth of information and communications technology (ICT) in Africa had also been phenomenal, and showed no signs of slowing, Zuma said.

“The number of mobile phone users has multiplied 33 times to 316-million users since the year 2000. The internet is spreading around Africa at an even faster pace.”

Africa was open for business, Zuma said. “What is left is for the business sector to grab the opportunity and reap the rewards of this growth, in a manner that promotes inclusive growth, and which creates decent work for the African people.”