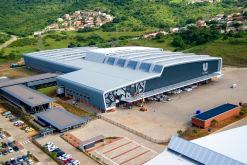 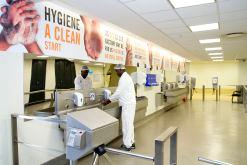 By 2015, Unilever’s Lifebuoy soap brand
aims to change the hygiene behaviour of
a billion consumers across Asia, Africa
and Latin America by promoting the
benefits of hand washing with soap.
(Image: Unilever)

Unilever South Africa’s new R670-million (US$83.6 million) state-of-the-art savoury foods factory, complete with outstanding green credentials, has been endorsed as one of the largest private investments in South Africa in recent years.

Unilever South Africa is one of the country’s largest fast moving consumer goods (FMCG) companies and its products are well known in households across the region.

Unilever operates in nine product categories – laundry, savoury and dressings, skincare and cleansing, margarine, deodorants, household care, tea, hair care and ice cream – and is the market leader in seven of these categories.

The new facility will allow the group to increase its production capacity significantly. It has been designed to produce 65 000 tons of product per year and has an expansion capability of up to 100 000 tons.

The factory will produce products sold under the Aromat, Knorr, Knorrox, Rajah and Robertson’s brands. It is in its start-up phase and will be in full production by the first quarter of 2012.

The new facility’s location in South Africa is a major economic boost for the local economy.

At the official opening, trade and industry minister Rob Davies said that the plant showcases South Africa’s manufacturing capability. It also shows that big business has confidence in South Africa as an investment destination.

Indonsa is the first facility of its kind for the Unilever group and South Africa’s first green manufacturing plant.

According to figures supplied by Unilever’s chief supply chain officer, Pier-Luigi Sigismondi, the group wants to reduce its global carbon dioxide emissions from manufacturing and logistics by over 40% by 2020 from its 1995 baseline, at a rate of almost 5% a year.

The new facility will also make it possible for Unilever to cater for changing consumer demands. According to Sigismondi, there is a growing global demand for sustainably-sourced products.

Carbon reduction is achieved through energy efficient controlled zoned lighting and innovative insulation methods that reduce heat loads from the sun. This reduces the need for air conditioning.

The new factory also comes complete with rain harvesting technology that captures rain water from the building’s 22 000 square meter roof. The water is channelled into a 1.5 million-litre tank, treated and added to the facility’s recycled water reserves.

The plant’s smart water efficiency technology has helped Unilever to recover 70% of all water used in production processes. It has also reduced the facility’s reliance on municipal water.

All process and shower water is recycled using biological and reverse osmosis treatment.

Any excess waste leftover is converted by a waste energy plant and the energy produced is fed back into the national energy grid.

The facility was constructed in keeping with the global Unilever Sustainable Living Plan (USLP), launched in November 2010.

Unilever hopes to make a difference beyond the factory gate by reducing its footprint across the entire lifecycle of its products.

The goal of the USLP programme is to reduce the environmental impact of all Unilever products by 50%, and to source 100% of its agricultural raw materials sustainably.

Also part of the plan is to help more than a billion people take action to improve their health and well-being through use of its products that have clear health benefits.

By 2020, Unilever will use globally recognised dietary guidelines to double the percentage of its portfolio that meets the highest nutritional standards, helping many people to achieve a healthier diet.

By 2015, Unilever’s Lifebuoy soap brand aims to change the hygiene behaviour of a billion consumers across Asia, Africa and Latin America by promoting the benefits of hand washing with soap.

Unilever is ranked as one of the country’s best employers, best FMCG employer and best large sized employer.