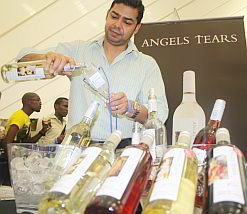 Crème de la crème of local wine will
be available for tasting at the
Soweto Wine Festival. 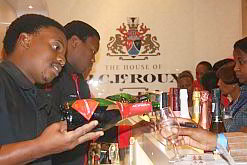 The festival attracts thousands of wine
connoisseurs from the township and
Gauteng.
(Images: Bongani Nkosi)

The upcoming Tops Soweto Wine Festival looks set to be the biggest of its kind yet, with organisers bracing for a record number of visitors.

The three-day annual event, known for attracting thousands of wine connoisseurs from the township and across Gauteng, offers lucrative opportunities for South African wineries to grow their market base.

At least 9 000 people are expected to turn up this year to sample some of the country’s finest wines at the University of Johannesburg’s Soweto campus between 1 and 3 September.

It’s estimated that attendance this year will grow from the 7 548 visitors recorded in 2010, which surpassed the expected 6 500. This is good news for exhibiting wineries. A massive turnout will boost sales and help them achieve market dominance in Soweto, a township whose economy has developed rapidly over the past few years.

Money-making establishments such as malls and a hotel have sprung up there as more and more residents enjoy an expendable income.

Cape Wine Academy, the festival organisers, said the 2011 edition will be “hailed as the biggest and most vibrant wine festival to date with an over 9 000 visitors expected over the three evenings”.

They added that they’ll expand the venue, among other improvements, to accommodate the crowd.

“…We have extended the space this year,” said Marilyn Cooper, the festival’s co-founder and MD of Cape Wine Academy.

“We have worked hard on the additional premium marquee and the outside areas to provide a full-spectrum experience of wine, different foods and entertainment …” she added.

Support for the event has burgeoned: a Cape Wine Academy official said 77 wineries, all from South Africa, have confirmed their participation.

“Believe it or not, we are full,” said Cooper. “There is no more space to fit another sponsor or wine exhibitor.”

The crème de la crème of local wines will be available for tasting and buying at this year’s festival.

Research over the last six years has shown that premium white and red wines such as Meerlust, Rupert and Rothchild, Ernie Els, Alto, Boekenhoutskloof, Hartenburg, Raka and Zandvliet are popular among enthusiasts, according to the Cape Wine Academy.

These, along with a range of rosé and semi-sweet wines, will have a presence at the event. “The wineries that have booked this year are bringing a fantastic variety of wines to cater to all palates from the new-tasters to premium wine-drinkers,” Cooper said.

Cooper started the wine event in 2005 with Soweto businessman Mnikelo Mangciphu. The inaugural festival, held at Ubuntu Kraal in Orlando West, drew 1 500 wine enthusiasts, but since then numbers have shot up.

Mangciphu identified a new opportunity after the inaugural festival, and went on to launch Morara Wine Emporium, his first wine store, in the township.

He said the emergence of certain new businesses have been a tangible result of the festival’s success over the years.

“We are aware of a wine-distribution company that has opened a warehouse in Soweto due to the growth in wine sales, which can be directly related to the Soweto Wine Festival,” said Mangciphu.

“And there are many people who have approached Marilyn and myself and said ‘thank you, your festival inspired me to launch my magazine, my wine club, my business, my restaurant’.”

The event also helped inspire the Gugulethu Wine Festival, which was initiated in the Cape Town township in May 2011.