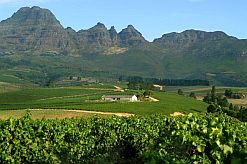 South Africa wines have trounced all international competition in both the red and white single varietal categories at the 2009 Decanter World Wine Awards, held in London under the auspices of Decanter magazine.

While the results are released to the trade earlier in the year, the rest of the world has to wait for the traditional September award issue to find out which are the wines to seek out.

South Africa’s own home-grown Pinotage grape variety has come into its own in recent years. The grape was created in 1925 by the chemist Abraham Izak Perold, also first professor of Viticulture and later Dean of Agriculture at Stellenbosch University in the Western Cape. Perold bred a cross between Pinot Noir and Cinsault, both varieties of Vitis vinifera, the common grape vine.

Cinsault is known as Hermitage in South Africa, hence the blending of the names of the two parents to form Pinotage.

The first Pinotage wine was made in 1941 by CT de Waal, a lecturer at the Elsenburg Agricultural College in the Stellenbosch district.

However, it was only in 1959 that a Pinotage from winemaker Pieter Krige “PK” Morkel of Bellevue estate won the first of many awards for the variety. Morkel’s wine took the coveted General Smuts trophy for the best young wine at that year’s Cape Young Wine Show (now known as the South African Young Wine Show).

Bellevue estate, still run by the Morkel family, continues to produce award-winning wines, among them the famous Pinotage.

Farmers subsequently stampeded to plant Pinotage vines, but even so the variety never quite took off until 1991 when Kanonkop’s Pinotage earned winemaker Beyers Truter the Winemaker of the Year award at the International Wine and Spirit competition in the UK. Truter was the first South African to achieve this.

Kaapzicht estate lies between Stellenbosch and Kuils River and since 1946 has been in the capable hands of the Steytler family.

Kaapzicht’s reds are no strangers to international recognition. In 2004, at the International Wine and Spirits Competition in London, the estate’s Steytler Vision 2001 became the first Cape Blend (a 40% Pinotage blend) to win the title of overall world’s best red blend.

Grapes from those same vines have now been used to produce the 2009 Decanter winner. Kaapzicht Steytler Pinotage 2006 lay for two years in new French oak barrels before going to the bottle.

“Pinotage is a very versatile red wine variety,” commented cellarmaster Danie Steytler, “and the Kaapzicht Steytler Pinotage from those vineyards is a shining example of the serious, well-oaked, full-bodied style to be enjoyed with food, especially venison, red meat and traditional South African dishes and cheeses.”

Decanter judges agreed, commending it for its “voluptuous, heady nose with very precise black fruits, plums, mocha and tar. Full-bodied and opulent in the mouth, ripe and supple fine-grained tannins with plenty of spice to enliven the finish”.

Made from the oldest vines

The winning white single varietal Beaumont Wines Hope Marguerite 2008 is a Chenin Blanc made, as the vineyard claims, only from fruit harvested from the oldest vines.

The winery is located in Bot River in the Western Cape’s Overberg region. For the past few years Beaumont has concentrated solely on producing Chenin Blanc, having discontinued its Chardonnay and Sauvignon Blanc.

The results speak for themselves. Named after the matriarch of the Beaumont clan, Hope Marguerite Beaumont, the winning wine, was glowingly described by Decanter judges as having a “stylish spicy floral character, supple orchard fruits, white almond and grass. Soft and broad on the palate, lifted citrus fruits with some glycerol and honey at the end”.

“Our Chenin really illustrates the diversity of the grape as well as its strong roots in the Beaumont soils,” commented winemaker Sebastian Beaumont.

“We allow the grape to express itself in very hands-off wine-making – this has been the essence of the Hope Marguerite,” Beaumont added.

Decanter magazine, the UK’s leading wine magazine, is sold in 92 countries and for the past six years has presented the prestigious World Wine Awards. A record 10 285 entries from 2 240 producers poured into the Decanter offices for the 2009 event, more than for any other wine event.

Wines compete according to region and in eight price brackets, ranging from less than £4.99 (R61) to over £40 (R487). Once the initial rating has been given, the gold medal-winning wines are re-tasted for confirmation, and then go forward to the regional taste-off.

The regional winners then compete for an array of international trophies, which are judged in two sections for each wine style, under £10 and over £10.

The judging panel is chaired by veteran British wine consultant and journalist Steven Spurrier, who is assisted by a number of regional chairs. This year the South African section was chaired by the respected John May, a senior wine master in the UK.