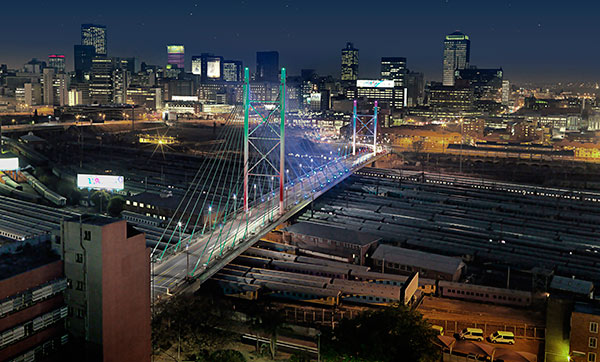 South African cities are leaders in innovation and commerce in Africa, but still lags behind most cities around the globe. Experts say cities have to larn to collaborate with each other before they can can improve their global competitiveness. (Image: Brand South Africa)

Cities are now more than ever the lifeblood of the global economy, and their competitiveness increasingly determines the wealth and poverty of nations, regions and the world, according to the World Economic Forum (WEF), which has been the leader in determining the competitiveness of nations since 2004.

South Africa is no exception. Its cities are playing a bigger role not only in determining the economy but also the lives of thousands of people. Johannesburg, Cape Town, Durban, Pretoria and Port Elizabeth are home to numerous industries; they set the trends and absorb the country’s most talented individuals. But because people from all over South Africa and Africa are flocking to these centres, the infrastructure is struggling to support them.

Asset management company Pragma says that for South African cities to be globally competitive, they need to be smarter, and that means better hard and soft infrastructure. Pragma’s executive director of sales and marketing, Nico Mabaso, says smart cities can provide businesspeople with the infrastructure they need to run and sustain competitive trade. The National Development Plan has pointed out that all components of a smart city are essential to help South Africa become a globally competitive nation, he adds.

“The smart city concept is upon us and South African cities have the basic infrastructure to be African pioneers of this, but only if we manage internal bureaucracy and view asset management as a strategic imperative and not a compliance nuisance.”

The WEF has created a four-part taxonomy upon which it bases the competitiveness of a city. These are:

The Economist Intelligence Unit (EIU) defines a city’s competitiveness as its ability to attract capital, business, talent and visitors. Of the seven African cities included in the 2012 EIU report that ranks the competitiveness of 120 of the world’s major cities, not one made the top half of the index. South Africa had three contenders, namely Johannesburg (67th), Cape Town (73rd) and Durban (94th).

South African cities, it seems, still have a long way to go to become truly globally competitive players. But as Cape Town Partnership chief executive Bulelwa Makalima-Ngewana said in an op-ed published in the Cape Times earlier this year, South African cities should start by collaborating with each other to gain more of the global economic pie. “By jointly celebrating the local distinctiveness and unique attributes that give each of our cities a particular competitive edge, we can make the most of these assets.”

With this in mind, we take a look at four South African cities and examine what makes them competitive:

Cape Town is more than just the mountain, Parliament and Long Street. It is also the country’s entrepreneurial capital. The Global Entrepreneurship Monitor found that the amount Capetonians would pursue business opportunities was 65% higher than the national average, more than in any other city in South Africa. Johannesburg, often referred to as the country’s economic hub, was only 24% above the national average. It is estimated that 75% of Cape Town’s enterprises are driven by small businesses.

In recent years, Cape Town has been positioning itself as the ICT and innovation hub of South Africa. Home to Silicon Cape Initiative, Bandwidth Barn and Umbono, it was ranked fourth in the emerging cities list of the annual 2thinknow Innovation Cities Index in 2014. Only edged out by Dubai, Abu Dhabi and Istanbul, it had the highest number of successful IT companies in Africa.

The Mother City is also this year’s World Design Capital. According to the initiative’s website, being a design capital gives the city the opportunity to showcase internationally the outcomes of its design initiatives and programmes, as well as the merits of its creative industries. Under the umbrella theme “Live Design. Transform Life”, designers are encouraged to focus on how their work can lead to social transformation.

According to the EIU study, Cape Town ranks just ahead of Beirut (Lebanon) and Porto Alegre (Brazil), but behind Busan (South Korea) based on economic strength, and slightly ahead of Istanbul , on overall competitiveness.

In its economic growth strategy, the city council notes that its growth is hampered by excessive regulation and a planning regime that often adds to the time and cost of doing business in Cape Town. This undermines the city’s competitiveness as an investment destination.

In the State of Cape Town 2014 report, it was found to be the fastest growing city in South Africa in terms of population. The report found that 35% of the new arrivals to the city came from the Eastern Cape, with most of these people settling in the Khayelitsha area. It also predicted that the city’s population was likely to reach 4.2 million by 2022. Almost 40% of Cape Town’s population growth between 2001 and 2011 was from in-migration from outside the province. 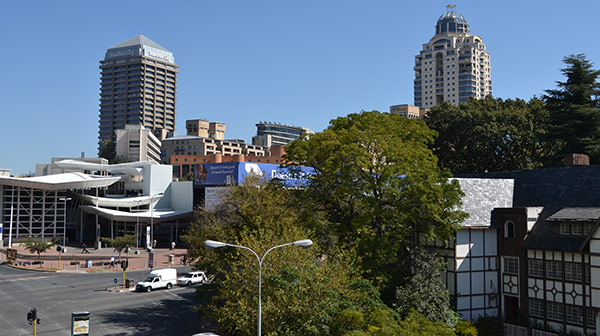 According to the City of Johannesburg website, the city is South Africa’s economic centre, generating 16% of South Africa’s wealth and employing 12% of the national workforce. (Image: Shamin Chibba)

Johannesburg is a city that is forever changing its landscape. At present, both its hard and soft infrastructure are in for a revamp.

Mayor Parks Tau recently launched the city’s newest project – the Corridors of Freedom. Its strategy is to link areas on the outskirts of Johannesburg to CBDs through revamped transport infrastructure. For instance, the newest bus rapid transit line being built will connect Sandton to Alexandra. Once it is up and running, people will not have to wake up before dawn to catch trains and taxis to get to work, and instead can spend that time with their families.

Corridors of Freedom includes installing bicycle and bus lanes, as well as pedestrian walkways so that Joburgers will not need to use private transport.

According to Gloria Nkadimeng, the group head of ICT in the city of Johannesburg, the city is on the way to becoming a technologically smarter place. She says the council is already planning to roll out new broadband technology that will give citizens a platform for innovation. “We would like to have an environment where we can engage our citizens,” she explains.

One of the main characteristics that make up smart cities is the blending of ICT with consumer and operational technologies so as to bring government to the people, Nkadimeng adds. “In order to have connected cities, we can never leave the human factor out of it because it is people who will make it possible to have [smart cities].”

Johannesburg intends to increase co-operation between the three spheres of government, namely local, provincial and national, so that its smart city initiative can be boosted.

For architect Gerald Garner, the transformation of Johannesburg’s hard infrastructure in the inner city has eliminated the distinction between rich and poor. Speaking to the Johannesburg Development Agency, he said that in the last seven years, there had been a mass conversion of empty shops and buildings into affordable residential apartments which had drawn more than 100 000 people to the inner city.

People of all classes now lived, worked, shopped and even walked the streets of the city. “We have a city that creates equal opportunities, where people can share public space, use public transport and live easily and freely without the shackles of the old economy,” Garner said.

Architect Brian McKechnie, the director of Retail Improvement District, says opening up these spaces has encouraged people to interact with each other. “You can have a mielie [corn] seller, a banker from FNB or an engineer from Anglo American on the pavement, which makes the city a really democratic space. You are going to cross paths on the street and that is really dynamic because there is not this one type of person there.”

Currently, Johannesburg is the most visited city in Africa, with 2.5 million tourists arriving every year. Its appeal lies in the notion that the city is reflective of South Africa and the continent. 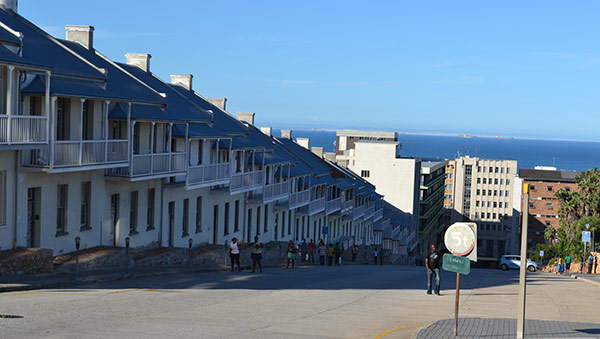 Nelson Mandela Bay is positioning itself as an industrial hub with the Coega Industrial Development Zone and Port of Ngqura becoming the city’s economic drivers. (Image: Shamin Chibba)

Nelson Mandela Bay metro comprises the towns of Port Elizabeth, Uitenhage and Despatch and is a major seaport and automotive manufacturing centre located on the south-eastern coast of South Africa. It is considered the hub of the automotive industry in Africa, with Volkswagen its biggest feeder based in Uitenhage. According to the metro’s 2009 integrated development plan report, the industry contributes 33% to the local economy.

The Coega Industrial Development Zone (IDZ), the largest IDZ in the southern hemisphere, is also home to a number of companies, ranging from steel smelters to manufacturers of dairy products. Adjoining this is the Port of Ngqura, a modern multi-user deep water harbour developed by the National Ports Authority of South Africa. Transnet, the logistics parastatal, announced last year that it would use up to R2.3-billion to upgrade existing rail lines from the port to Hotazel, a manganese mining town in the Northern Cape about 1 000 kilometres away. This will help to increase the amount of manganese hauled from the mining town from 5.5 million tons per year to 16 million.

Tourism has also picked up of late, with both local and international tourists attracted to the metro’s 40 kilometres of beach, four of which have Blue Flag status. It is also just 70 kilometres away from Addo Elephant Park. 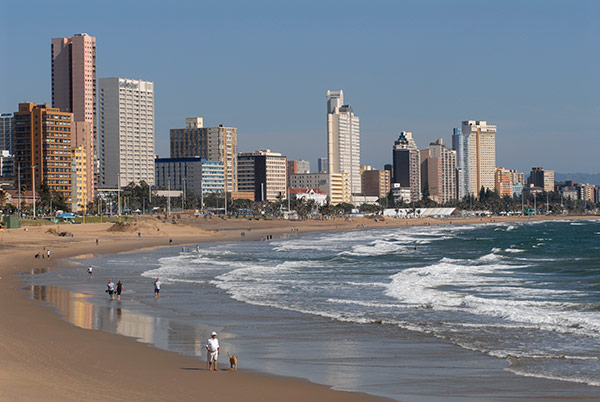 eThekweni, which comprises Durban and surrounding areas, could become the country’s newest job creator. With the launch of Dube Trade Port, the city could employ up to 150 000 people. (Image: Brand South Africa)

The metropolitan area of eThekwini includes Durban as its main hub, with the towns of Pinetown, Tongaat, Umhlanga and 90 other districts surrounding it. It is the third largest city in the country, with a population of more than 3.4 million people. It also has the largest port in the southern hemisphere, the Port of Durban.

According to the 2009 American Association of Port Authorities World Port Rankings report, Durban handled 2.5 million twenty-foot equivalent units, putting it among the top 50 busiest ports in the world. There is a strong focus on manufacturing in the metro, with Huletts sugar in Tongaat, Toyota’s factory in Prospecton, and numerous textiles facilities all calling the city home.

In the most recent step, on 7 October, President Jacob Zuma opened the Dube Tradeport IDZ, adjacent to King Shaka International Airport. Zuma said that it could contribute R5.6-billion to the country’s gross domestic product (GDP) and create 150 000 jobs. It had already attracted R900-million in private sector investments.

Durban itself contributes about 55% of the region’s GDP and about 15% of the country’s GDP.

Brand South Africa will host its second South African Competitiveness Forum in Johannesburg on 4 and 5 November 2014 under the theme “Active citizenship and its role in changing the South African brand reality”. Top minds from business, government, civil society and the academic world will come together to discuss our position in the world, and uncover ways to give South Africa a competitive edge on the global stage. Click here to find out more.