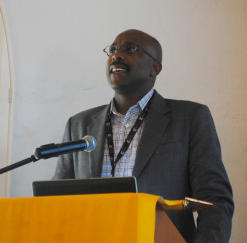 Brand South Africa CEO Miller Matola said that the competitiveness report is an important factor in building a national brand.

To coincide with the recent release of the World Economic Forum’s (WEF) Global Competitiveness Report for 2012/2013, Brand South Africa hosted a panel of experts for a discussion regarding the implications for the country.

South Africa’s strengths, weaknesses, competitive risks and opportunities within the Brics and Next11 international political economic environments were the topics at the Wits Club at the University of the Witwatersrand in Johannesburg on 28 September 2012.

Miller Matola, CEO of Brand South Africa, started the proceedings with some background on the work Brand South Africa does and how the WEF report is a factor in establishing a worldwide reputable brand for the country.

Matola said: “We are the custodians of the country’s brand and the issue of reputation is important for South Africa’s competitiveness. The competitiveness report shows us how the country is doing as a brand.”

The latest WEF Global Competitiveness Report was released on 5 September 2012 and South Africa is ranked at number 52 out of 144 nations.

It is also the highest-ranked African country and third-placed among the Brics economies. In this bloc China came in first at 36 and Brazil second at 48, while India and Russia came fourth and fifth at 59 and 67 respectively.

In terms of Next11 countries, South Africa is only surpassed by Indonesia, Turkey and South Korea.

De Kock said: “We view the report as a learning curve and not as a school report card that says pass or fail.

“We can only sell the story of South Africa if we know what the world thinks about us.”

The Global Competitiveness Report uses 12 pillars, which are “building blocks to finding out the country’s competitiveness,” said de Kock.

De Kock said: “When we look at the pillars we can see where we are excelling and where we have to improve.

Van der Heever said that South Africa has degrees of freedom in macro-economic policies that are the envy of many countries, but we must use them wisely.

“The issue of electricity is one point that must be tackled if we are going to be competitive,” he said.

Parsons said that these types of surveys are important, because they act as “reality checks. This particular report is a wakeup call because if you look back six years we have deteriorated quite a bit.”

He also said that the country was not exploiting its strengths to their full potential – “but there is no universal law. Countries have to adapt certain points to fit with what is happening in the world economy.”

In terms of South Africa’s national development plan, which looks forward to 2030, Parsons said that competitiveness should play a major role in guiding South Africa in years to come.

“We need to have a long term vision, just like China sowed its seeds 30 years ago and we too need to rally behind the Vision 2030,” said Parsons.

Nhlapo-Hlope remarked on the low levels of trust levels in South Africa, explaining that this was because of inequality. This issue had to be addressed in all spheres so people can all work collectively for the good of the country.

Another issue raised was that of South Africa’s regulatory environment which, according to Van der Heever, was not conducive for entrepreneurs to start businesses, especially small businesses.

“Of course we need regulation but there is no reason for that regulation to not be business friendly. We need smart tape and not red tape,” he said.

Van der Heever also said that there was an over-cautious nature in South Africa that limited innovation.

Parsons wrapped up the discussion, saying that we need to take workable ideas and translate them into action, while also pushing Vision 2030.