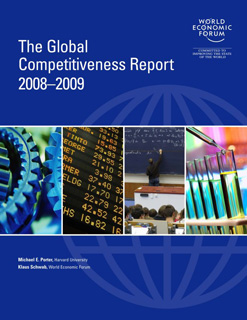 The South African economy’s global competitiveness remains steady, coming in at 45th out of 134 countries in the Global Competitiveness Report 2008-2009, published by the World Economic Forum (WEF). In the 2007-8 report it was ranked at 44th out of 131 countries surveyed.

This makes South Africa by far the most competitive country in sub-Saharan Africa, with its closest rival, Botswana, coming in at 56th place, and Mauritius at 57th. It is also more competitive than European countries such as Italy, Greece and Poland, as well as than other developing countries such as India, Brazil and Mexico.

Despite the current global financial crisis the US retained its top spot in the rankings, with Switzerland second and Denmark third. The report ranks countries according to the Global Competitiveness Index (GCI), which looks at 12 “pillars” that include macroeconomic stability, market size, business sophistication and infrastructure.

“South Africa, ranked 45th overall, remains the highest ranked country in sub-Saharan Africa, with a very stable performance,” the WEF said in its summary of the report.

“Among the country’s strengths is the large size of the economy, particularly by regional standards (ranked 23rd in the market size pillar).

“The country continues to receive good marks in the more complex areas measured by the GCI, such as intellectual property protection (23rd), the quality of private institutions (25th) and goods (31st), as well as financial market efficiency (24th), business sophistication (33rd) and innovation.”

South Africa came close to the best in the world in the individual categories contained in each of the 12 pillars, coming in at fourth out of 134 for “financing through the local equity market” and “strength of auditing and reporting standards”, and fifth for “regulation of securities exchanges”.

Other notable rankings for the country were:

“South Africa benefits from high spending on R&D, accompanied by strong collaboration between universities and the business sector in innovation (both ranked 28th).

But the country was near the bottom of the rankings in the healthcare and primary education pillar, coming in at 122 out of 134. Its labour market efficiency was also low, at 88th place.

“South Africa does face a number of obstacles to competitiveness,” the WEF said. “For example, the labour market is ranked a low 88th for its lack of flexibility. Further, the country’s innovative potential could be at risk with a university enrolment rate of only 15%, which places the country 93rd overall.

“The greatest concern, however, remains the health of the workforce, ranked 129th out of 134 countries, due to high rates of communicable diseases and poor health indicators more generally.”

Do you have queries or comments about this article? Email Mary Alexander at marya@mediaclubsouthafrica.com.