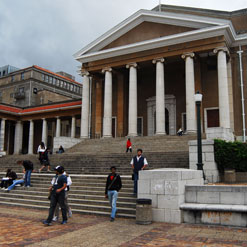 The University of Cape Town’s Graduate School of Business has yet another feather in its cap. Its full-time MBA programme has been ranked as the best value for money MBA in the world in the latest Financial Times of London’s Global MBA Top 100 ranking.

This is the fifth consecutive year the school has featured in the rankings. It remains the only business school in Africa in the FT MBA Top 100, holding the same spot as it did last year (71st).

This year it also received outstanding rankings in three other categories: fourth in international experience, seventh in the international mobility of MBA graduates and 15th in career progress.

“The UCT GSB is delighted with this Top 100 ranking for the fifth consecutive year,” said Professor Frank Horwitz, director of the business school. He said the ranking testifies to the high quality of the programmes and the exceptional standard of their MBA.

Cherry Burchell, marketing manager of the UCT business school, explained that because The FT MBA Top 100 is a global listing, it is viewed at the definitive rating internationally.

Horwitz added that being ranked as the best-value-for-money MBA in the world shows that the UCT MBA is competitively priced internationally for the high quality it delivers. This will help the school attract greater numbers of international students in the future.

“The UCT GSB is extremely well placed to capitalise on this trend and attract a greater share of the global MBA market,” he said.

According to Lance Stringer, MBA director at the UCT Graduate School of Business, the rankings also revealed that the school’s MBA alumni are well rewarded for their efforts in attaining the MBA.

“In dollar-weighted terms, our alumni are earning at the top of the table (position 14),” Stringer said. Alumni earnings are just behind the likes of INSEAD, London Business School and Stern and ahead of institutions such as UCLA, Yale, Oxford and Cambridge.