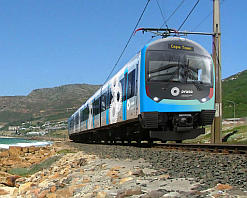 More investment and consistent attention to the condition of the continent’s transport network will result in economic growth.
(Image: Prasa) 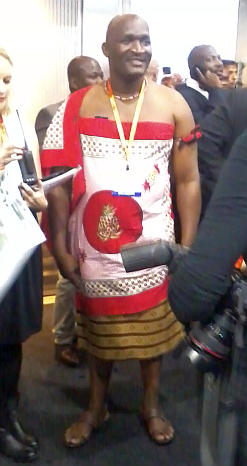 Swaziland’s minister of transport, Ntuthuko Dlamini, was a guest at the event, and also participated in the ribbon-cutting ceremony. 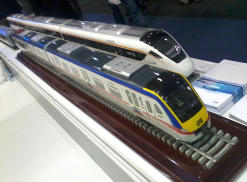 The China South Locomotive and Rolling Stock Corporation Limited, the world’s largest manufacturer of electric locomotives, was one of the exhibitors.
(Images: Janine Erasmus)

The 2013 Africa Transport and Infrastructure Show brought rail, road, shipping and air experts together, to discuss ways of boosting the transport sector and its economic and social impact on the continent.

The 16th edition of the show, which ran in Johannesburg from 24 to 27 June, featured presentations, panel discussions, workshops and an exhibition aimed at helping to solve the challenges involved in growing Africa’s transport network to a competitive level.

One of the event’s main goals, said organisers, was to empower attendees to be able to address “some of the most pertinent issues facing the industry in Africa today”, namely:

The consensus was that investment and consistent attention to the condition of the continent’s transport network will reap the desired harvest of economic growth.

Public enterprises minister Malusi Gigaba was named the Transport Personality of the Year at the event. He was recognised for his leadership and vision in debates on rail, transformation in the industry, promoting safety and ensuring that the highest standards are maintained.

Gigaba thanked his department as well as the state-owned enterprises which fall under it, for their contributions.

African industry is predicted to grow to trillion-dollar levels over the next decade, but the transport infrastructure must grow equally, or industry will suffer.

“Africa is rich in minerals, but poor infrastructure lets us down,” said South Africa’s deputy minister of public enterprises, Bulelani Magwanishe. He was participating in the opening panel discussion, held under the theme Innovation, trends and opportunities – improving Africa’s transport sector and moderated by Pierre di Borgo, principal investment officer with the International Finance Corporation, a member of the World Bank Group.

“Transport costs are generally high, which limits intra-African trade,” he said, adding that this problem should be tackled on a national as well as a regional and continental level. Since transport by road is more expensive than rail, the latter should be used whenever possible.

Countries should work harder to promote intra-continental trade, he said, mentioning that South African president Jacob Zuma has been named the AU’s champion of the North-South development corridor – a trade and transport route that extends some 8 600 km from Dar es Salaam in Tanzania to Durban in South Africa, moving through eight countries in East and Southern Africa on the way.

With regard to aviation, Magwanishe suggested that safety levels be improved to “counter the perception that African skies are unsafe”. Operating costs should also be lowered.

“If we can successfully attend to these issues, we will awaken the African giant,” he stated.

Swaziland’s minister of transport, Ntuthuko Dlamini, added his voice to the discussion, saying that transport is the catalyst for economic growth and development. He also advocated for more growth in aviation.

“We need capacity building in all countries, as well as improved efficiency and service delivery especially in the airlines – this is key.”

Dlamini said that air travel is vital for transporting high-value and perishable goods, while rail is better suited to bulky or hazardous goods. Land development around airports will generate additional revenue, he added.

The use, whenever possible, of rail and air reduces congestion and accidents, and increases public safety on the roads.

“Landlocked countries such as Swaziland depend on reliable transport channels to get our goods to export markets. If the SADC network is inefficient, we will lose out to other regions selling the same goods to global markets.”

In 2012, he said, Swaziland signed a memorandum of understanding for the development of a main line linking the little country to Mpumalanga province in South Africa, and from there to Mozambique and Richards Bay, one of South Africa’s important ports. This will provide rail access for Swazi goods to major trade routes and centres.

In terms of road transport, Dlamini noted that infrastructure development must be integrated. ”We need harmonisation of standards, for example, in the construction of flyover bridges, which may be of varying heights in different countries and may prevent a truck, which can go under bridges in its own country, from going under a bridge somewhere else.”

Relaxing of the cross-border permit procedure will also be beneficial, and the facilitation of one-stop border permits.

“Together Africa will prosper – divided we will fail,” Dlamini declared.

Capacity in transport sector is insufficient

Jeff Nemeth, CEO of Ford Southern Africa, said that 75% of his company’s products are transported from Gauteng province to 148 different countries, and this, as well as imports, depends on efficient infrastructure and procedures.

“Rail drove the American industrial revolution, and let’s not forget that the early transcontinental American railways were built by Chinese labourers,” he said, alluding to the fact that China is heavily involved in African infrastructure projects at the moment.

Locally, Nemeth named lengthy border crossings as one of the challenges to be overcome. “We fitted one of our trucks with a camera that took a photo every 15 minutes, and sent it from Johannesburg to Nairobi. When we analysed the footage we found that 90% of the truck’s images were taken at border crossings. This is a huge waste of time.”

If access to other markets is made easier with, for instance, quicker border procedures, he said, growth will accelerate. “The return on foreign investment in Africa is the highest of any continent. GDP growth as a whole is faster than that of Asia – the opportunities are endless.”

It’s also important that governments recognise that logistics are key to economic growth, Nemeth added. “We send 4 000 trucks a month to the Durban port, and for this we need seven trains a week. In a good week we’ll get four, in a bad week two, so we send the rest by road, which is less efficient. There is not enough capacity in the rail system – it needs more investment.”

Hamadou Sali, chairperson of Cameroon’s Camrail, which operates that country’s national railroad, said that rail is the greatest development tool for Africa. Since Camrail began operations in 1999, passenger volume has grown by 30% and passenger travelling distance by 66%. The amount of goods shifted has also increased, and the investment in freight and passenger capacity has also resulted in job creation.

Piet Sebola of the Passenger Rail Agency of South Africa said that transport underpins economic growth, and that investment into the movement of people and goods is essential. He felt that this could be accelerated with more private-public partnerships.

The dilapidated state of much of the continent’s transport infrastructure is a result of what he called the boom-bust approach, which saw a peak in investment and construction in the 1970s but had quietened by the 1990s.

“Now we must recover that under-investment over the last few decades,” he stated. “The sector must evolve – the rail network, especially, has not changed much even since the arrival of democracy in 1994.”

If there is inefficiency in one sector, manufacturers will turn to another sector, he said – “So what should not be on the roads, is now on the roads.”

Technology must also evolve with the times – no country can rely on decades-old technology. “We saw this with the boom-bust approach – you can’t invest and then take a break for 20 years. It needs to be consistent.”

With the help of aggressive investment from the private sector, he said, this is possible. “There is a huge economic benefit that comes with such investment. The reality is that the fiscus can’t sustain investments on its own.”

Di Borgo mentioned that a recent McKinsey report revealed that private-public partnerships can generate, on average, about 10% of needed investment – therefore the government’s role remains critical.

Sebola agreed with Dlamini that development around transport nodes will bring added revenue. “Along the line there will be development where the private sector can benefit.”