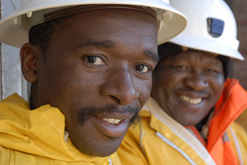 Workers who qualify for the new fund will
receive 50% of their basic wage, up to a
maximum of $773 (R6 239) a month.
(Image: Graeme Williams,
MediaClubSouthAfrica.com. For more free
photos, visit the image library.)

President Jacob Zuma has announced the highly-anticipated training layoff scheme, backed by a fund worth $298-million (R2.4-billion), which will help hard-hit workers and their employers ride out ’s first recession in 17 years.

The initiative falls under the Medium Term Strategic Framework for 2009 to 2014, which is government’s response to the development challenges that arose during the first five years of the decade. The framework’s leadership group comprises representatives from labour, business, government and the community.

Among the framework’s key objectives are the reduction of poverty and unemployment by half, and the provision of skills required by the economy.

In his State of the Nation address in June 2009, Zuma mentioned the imminent implementation of the training layoff scheme.

Making the announcement at a media briefing in August 2009, the president said that the scheme will be launched the folowing month. The funds are to be drawn from the national skills fund and unemployment insurance fund, both administered by the Department of Labour.

Like countless others around the world, ’s economy has taken a beating in recent months. The motor, clothing and textile industries have been particularly hard hit, while mining and tourism have also seen a slump.

The number of unemployed South Africans rose to 23.6% in the second quarter of 2009 from 23.5% in the year’s first quarter. With thousands of jobs still in the balance and strikes arising in all sectors, government’s training layoff scheme is intended as an alternative to retrenchment.

Workers facing unemployment are instead given a temporary breathing space of three months at the most. In this time they will undergo training that is compatible with their current field of employment, in order to enhance their skills and afford them better opportunities when they return to work.

All applications will be handled by the Commission for Conciliation, Mediation and Arbitration (CCMA). In selecting which applicants to approve, the CCMA has a strict set of rules to follow. These rules will be revealed within the next two weeks.

The CCMA will also work with employers and trade unions in reaching agreement for the alteration of employment contracts to make the layoffs possible.

Government will push for training in information and communication technology but where necessary will attend to basic training in literacy and numeracy.

Cosatu secretary-general Zwelinzima Vavi also expressed his satisfaction that the president himself was taking an active role in addressing the problems faced by citizens.

“Government is now coming seriously to the party, driving this process at the most senior level,” commented Vavi. “The president is the public face of the campaign. We cannot be more happy than we are now.”

Vavi also said he was personally working with the private sector, putting steps into place to ensure the layoffs would not be abused.

Other steps in place

The layoff scheme is just one of government’s strategies to tackle the recession. The motor, clothing and textiles industries are to get special attention with support for struggling businesses and a planned rescue package, details of which have not yet been revealed.

Government is to link its infrastructure development programme to the manufacturing sector, offering extra incentives for the production of certain types of equipment and products.

The South African Revenue Service is to bump up its ability to sniff out customs fraud, said to be a big contributing factor to rising job losses.

The state-owned Industrial Development Corporation, which provides funding to entrepreneurs and businesses, has allocated $748-million (R6-billion) to deal with the financial crisis over the next two years.

Government also plans to speed up payments to small, medium and micro enterprises and other businesses, handing over the money within 30 days.

Furthermore, embattled consumers and companies can now breathe a little easier with the establishment of the National Debt Mediation Association. The organisation, launched in May 2009, is aimed at helping those who approach them to consult with a debt counsellor and then restructure their debt.