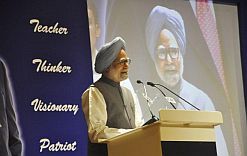 The Doing Business with India conference
will take place on the third day of the India
Show, giving corporate leaders from India
and South Africa a chance to network and
discuss potential business opportunities
(Images: Confederation of Indian Industry)

The India Show, which runs from 29 August to 1 September 2010 in Johannesburg, looks set to strengthen trade ties between South Africa and India, while giving local businesses a taste of global export opportunities.

“There are good relations between South Africa and India in investment and trade, and we hope these will be strengthened,” said India’s High Commissioner to South Africa Virendra Gupta.

The country is also the biggest importer of South African coal, receiving 21.6-million tons of it a year.

Gupta said South Africa’s small and medium enterprises will benefit from the show by having an opportunity to interact with Indian businesses, which may be interested in local products and services.

“We are not just selling businesses to South Africa, but linking the country’s exports to India,” he said.

Major exhibition and forum on the cards

During the show there will be an exhibition of 54 Indian businesses representing industries such as motor, biotechnology, tractor and farm implements, agro and food processing, pharmaceuticals, healthcare, mining, telecommunications, IT, power, roads and railways, and retail.

The India-South Africa CEOs’ Forum will also hold its first meeting at the show on 30 August, aiming to find ways in which the bilateral trade target can be met by 2012.

Sharma, in his role as India’s commerce minister, and South Africa’s Minister of Trade and Industry Rob Davies will be the main speakers at the forum. It will be co-chaired by Ratan Tata and South African mining magnate Patrice Motsepe.

India’s commerce and industry ministry, together with the Confederation of Indian Industry (CII), will also have an exhibition at the show.

Organisers have said one of the show’s highlights should be the Doing Business with India conference on 31 August, to be held at the Sandton Convention Centre. The conference will focus on infrastructure financing and regulations, and is expected to attract foreign investment.

“South Africa is the gateway to Africa and this event is an amalgamation of many things with business interface,” said CII deputy director Navita Vinayak.

A large delegation of corporate leaders from India and South Africa will attend and participate in the conference.

Vinayak added that it would be a great networking opportunity, giving South African businesses a first-hand account of the opportunities available in India.

The commerce ministry said India would also display its “soft power” at the show to celebrate the country’s culture, cinema, fashion and cuisine. A fashion show will be held at Turbine Hall in Newtown, central Johannesburg, on 30 August featuring India’s most accomplished designers, Manish Malhotra and Satya Paul.

There will also be an India Food Week for the duration of the show at the Sandton Sun Hotel’s San Restaurant.