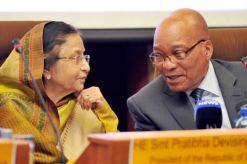 Indian President Pratibha Devisingh Patil
and President Jacob Zuma have been in
talks to expand bilateral trade and
investment partnerships
between the two countries.
(Image: GCIS) 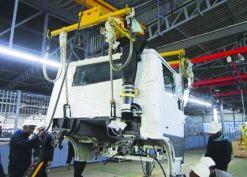 RELATED ARTICLES
• India invests in Africa development
• Zuma: shared prosperity for all
• India and SA: 150 years of history
• Africa is open for business

South Africa and India are ready to take their bilateral trade and investment partnership to a new level. During the Johannesburg leg of the South Africa-India Business Forum, prominent Indian companies already doing business on the continent called on more businesses to bring their investment to Africa.

Tata is India’s largest automobile company and according to Nomaxabiso Majokweni, CEO of Business Unity South Africa, is one of about 100 Indian companies already investing in South Africa.

The company has a strong presence in the African business community, being the single largest Indian investor in South Africa and Africa. It was also one of the first foreign companies to enter Africa and according to Dhawan, has plans to expand its business even further on the continent.

“My message is loud and clear. You need to bring your money and invest in Africa,” Dhawan said. “The real fact is that you can’t ignore Africa.”

He said that the ease of doing business in Africa is attractive to potential investors.

The credibility of South Africa being ranked as one of the top emerging economies in terms of its ease of doing business has a significant impact on its competitiveness as a country.

“I have huge confidence in Africa,” he said.

Soni said there are numerous factors that would encourage Indians to invest in South Africa. The country is one of the biggest economies in Africa and is rated as an upper-middle income economy by the World Bank.

According to Soni, promising areas for investment and joint ventures include mining; power generation and distribution; transportation; agriculture; IT education and services; ports and railways; telecommunications; pharmaceuticals and education.

He singled out railway development as an important area for collaboration as this is vital for regional interconnectivity.

“In India, on a daily basis, two million people use railways. India can help South Africa to establish a larger railway footprint,” he said.

“Financial services is a forgotten sector, yet every aspect of trade between the two countries is underpinned by financial services,” Ross said. “You can’t do business without it. Every business that is opened has to be insured.”

He pointed out that risk is a major consideration for any investor and this is why there is so much opportunity for risk-related financial services.

“Risk-related financial services offers an opportunity to broaden the depth of interaction between the two countries,” he said. “It is a multi-billion dollar business and South Africa has a lot to offer in terms of this sector.”

In her address at the forum, President Patil said that South Africa is one of India’s most important trading partners.

“In the future I believe our countries will have deep economic engagement. We view South Africa as a gateway to the Southern African region,” Patil said. “Our confidence in the South African economy is reflected in that several Indian banks operate in South Africa.”

She said in her talks with President Jacob Zuma, they agreed to expand co-operation in the fields of power including renewable energy; health; information technology; science and technology; tourism; hospitality; infrastructure development, and culture.

Trade between the two countries is flourishing and the trading partners have announced further increases to the agreed trade targets.

Zuma told the business forum that South Africa and India are set to reach the targeted R116-billion (US$15-billion) in trade, ahead of their 2014 deadline.

The target was set by the two governments during Zuma’s state visit to India in 2010. Zuma said that, going by the latest trade figures – close to R54-billion ($7-billion) by the end of 2011 – this could be reached earlier than anticipated.

Patil said she is confident that the revised target can be achieved.

“A growth rate of over 43% in bilateral trade between South Africa and India registered in the year 2010-11 is impressive by any standard, but especially so in today’s global economic scenario,” she said.

Zuma said that the African continent is the new frontier of economic growth and development.

“We stand ready to provide whatever support is needed to make doing business easy in the respective countries.”