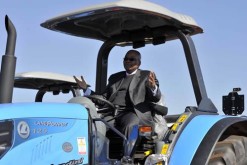 President Jacob Zuma gets into the spirit
of the occasion, at the handing over
of 85 new tractors to small-scale
farmers in Mpumalanga province
(Image: The Presidency)

Minister of Agriculture, Forestry and Fisheries Tina Joemat-Pettersson and President Jacob Zuma were on hand to witness a number of small-scale farmers of Marapyane village taking delivery of 85 new tractors.

The vehicles were distributed to all three districts of the province – Ehlanzeni, Gert Sibande and Nkangala.

The Masibuyele Emasimini tractor mechanisation programme is a four-year initiative aimed at addressing the ongoing problem of food security and sustainable livelihoods – but instead of providing mere garden implements the department has decided to make a more substantial investment. An initial allotment of R100-million ($13.1-million) is to be followed by an amount of R50-million ($6.5-million) to each of the country’s nine provinces.

Through the scheme, the Department of Agriculture, Forestry and Fisheries aims to encourage black citizens back into the agricultural sector. At least 10 500 farmers are expected to benefit.

About 14-million South African households face uncertain futures because of food insecurity, and more than 2-million others have already felt the effects. With the new equipment, small-scale and subsistence farmers will increase their output and ensure their families’ wellbeing. They will also be more competitive in the domestic and, hopefully, the international market.

The National African Farmers’ Union has been calling for government to take this step for many years, but with no luck, until now.

Zuma has endorsed the programme, which will be implemented in the provinces of Eastern Cape and KwaZulu-Natal within the next two years and will then roll out to the rest of the country.

“The issue of rural development and land reform is very high up on government’s agenda,” said Joemat-Pettersen, “as there are some real opportunities in the way of decent jobs and entrepreneurship. The state is committed to affording all players in this sector sufficient support and infrastructure.”

She added that transformation was an ongoing priority, and that her department was supporting black farmers and encouraging their development into key players in the sector – although the experience and importance of white farmers, who have traditionally been the county’s agricultural mainstay, will not be overlooked. They too will receive governmental support.

Joemat-Pettersen said that the Masibuyele Emasimini initiative was aligned with government’s goal of improving service delivery during 2010, and helping communities to achieve a better standard of living.

Chair of the Parliamentary committee on agriculture, forestry and fisheries Mlungisi Johnson said the initiative also fell into line with the UN’s Millennium Development Goals, which aimed to halve worldwide poverty by 2014, among other ambitions.

According to Buanews, the government’s news service, various private sector companies have expressed interest in contributing to the scheme.

US department store chain Walmart would like to develop a mentorship programme and a model for market access to its outlets, and South Africa’s Old Mutual has pledged R10-million ($1.3-million). Major bank Nedbank has set up an agricultural fund to the tune of R6-million to support local farming projects.

Joemat-Pettersen said that private-public partnerships would be of tremendous benefit to South Africa as it works to develop its agricultural sector.