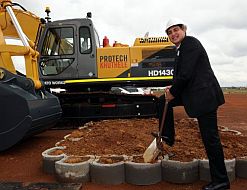 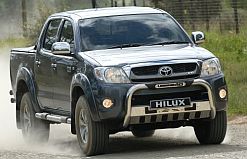 Toyota South Africa’s multi-million rand investment in a parts distribution warehouse in Ekurhuleni, east of Johannesburg, will create about 800 jobs.

The R363-million (US$51-million) project, announced on 17 January 2011, is Toyota’s largest investment in Gauteng province to date and follows a five-year R8-billion ($1.1-billion) investment programme in manufacturing facilities in Prospecton, Durban.

The news comes a month after Mercedes-Benz South Africa made a R2-billion ($281-million) investment in its East London plant ahead of its manufacture of the next generation C-Class, which will hit global markets in 2014.

The Toyota warehouse will be located near the OR Tambo International Airport and span an area of 80 000 square meters. It will be built in two phases, with the first section scheduled to open in 2012 and the second in 2015.

The warehouse will house about 110 000 different parts and components to serve Toyota’s local and overseas market.

Of the 800 new jobs to be created, 650 will be involved in the management, selection and distribution of parts. About 440 people will be hired to help construct the facility.

CEO of Toyota South Africa, Johan van Zyl, said: “The development of a distribution warehouse of this size and scale is one of the clearest signs that we are committed to South Africa and intent on remaining South Africa’s most popular vehicle manufacturer.

“In making this a reality, we believe that the government, through the actions of the Department of Trade and Industry and the Automotive Production and Development Programme, has created a stable and predictable environment in which we as manufacturers can make investments such as the one that we are announcing,” added Van Zyl.

The project is a partnership between Toyota and Investec Property Limited, the property arm of Investec, a specialist bank and asset manager.

David Rosmarin of Investec Property said: “Site selection was critical due to location, size and accessibility. It has been a lengthy process and we believe that the right site has been selected to accommodate Toyota’s current and future warehousing requirements.”

Toyota South Africa was established in 1961. It will celebrate its 50th year as a key player in the local motoring industry in 2011 and its 31st year as the market leader.

For the past 30 years Toyota has sold more vehicles than any other car manufacturer in South Africa and currently holds a market share of about 23%. It has sold more than 3-million vehicles since its formation and has an annual production capacity of more than 200 000 vehicles.

With sales exceeding expectations last year, Van Zyl said: “We are heartened by the strong performance in 2010, especially during the second half of the year. Although the market widely expected an increase in vehicle sales prior to the 2010 World Cup, we did not expect the market to continue at the same pace after July and in some instances even increase the rate of growth.”

Although Toyota had to recall some of its stock due to faulty accelerator cables in 2010, the effects of the recall were not felt.

Living up to its slogan, “Lead the way”, Toyota has been able to achieve remarkable results over the last three decades.

Investec was founded by Larry Nestadt, Errol Grolman and Ian Kanto in 1974 in Johannesburg.

Today the financing and asset management company operates from three principal markets, South Africa, the UK and Australia, and employs about 6 000 people.

Since acquiring its banking licence in 1980, it has bought up many other small companies, including the London-based Allied Trust Bank Limited in 1992 and Reichmans Limited, a finance trade company, in 1990.

The company is listed on the London and Johannesburg stock exchanges and sponsors rugby, football, horse racing and tennis in all the countries from which it operates.