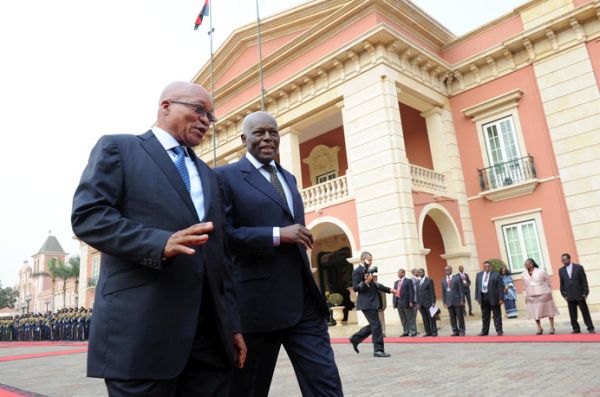 Relations between South Africa and Angola were tense in the past, but in recent years, the two countries have grown closer and even collaborate on a number of social and economic ventures. Pictured here is President Jacob Zuma with Angolan President Jose Eduardo dos Santos in Luanda last August. (Image: GCIS)

Brand South Africa’s dialogue on “Active Citizenship in Building Competitive African Nation Brands”, to be held this Friday, is focusing on South African-Angolan relations in particular, prompting a look at how the two countries have been building their partnership in recent years.

Past relations between South Africa and Angola were frosty: first, the apartheid government backed the Angolan opposition movement, National Union for the Total Independence of Angola (Unita); then, Thabo Mbeki did not improve matters when, as president, he called for negotiations instead of military solutions to end Angola’s civil war.

But the thaw started at the turn of the millennium. Ties between the two countries began taking shape in November 2000, when an agreement establishing economic, scientific, cultural, social and cultural collaboration led to the founding of the South Africa-Angola Joint Commission for Co-operation (JCC). The first JCC meeting took place in Pretoria on 28 February 2003. Still, the partnership did not amount to anything substantial.

This changed in 2009, when Jacob Zuma chose Angola for his first state visit as South Africa’s president. He met President Jose Eduardo Dos Santos in Luanda, starting an economic partnership that resulted in agreements on air services and diplomatic consultation as well as memoranda on trade, industry, commerce, housing, and sport and recreation.

At the time, the Mail & Guardian opined that Zuma was “seeking rapprochement”, saying Angola was an increasingly important player in Africa. In the same year, Angolan exports to South Africa amounted to almost R12-billion (about $1-billion) while South African exports to Angola amounted to R5.5-billion.

Dos Santos visited South Africa in December 2010, signing five bilateral agreements on public works, infrastructure development, telecommunications and information technologies, as well as a Declaration of Intent on the use of financial facilities. By 2013, the two countries had signed over 22 bilateral agreements across a wide range or sectors, including trade and industry, energy, science and technology, and sport.

Angola’s large oil reserves make the country the third largest economy in Africa. It became South Africa’s biggest trading partner on the continent in 2012 with total South African imports amounting to R23-billion and exports at R8.7-billion. South African private companies have also been active in Angola, with some of the more notable names being Nampak Bevcan, Standard Bank, Barloworld, Shoprite and Hollard.

This came about after 250 South African companies banded together to form the South Africa-Angola Chamber of Commerce in 2003. They were attracted to the Angolan market following the death of Unita rebel leader Jonas Savimbi, which brought the 27-year civil war to a standstill. The chamber advises South Africa-based companies on how to enter and operate successfully in the Angolan market.

Brand South Africa will host its second South African Competitiveness Forum in Johannesburg on 4 and 5 November 2014 under the theme “Active Citizenship and its Role in Changing the South African Brand Reality”. Top minds from business, the government, civil society and the academic world will gather to discuss the nation’s position in the world, and uncover ways to give South Africa a competitive edge on the global stage. Click here to find out more.