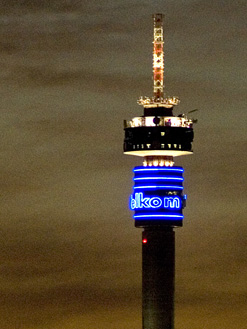 Telkom is set to expand its operations
in Africa, with the announcement of a
partnership with global telecommunications
giant AT&T. Pictured is the Telkom Tower
in Johannesburg. (Image: Chris Kirchhoff,
MediaClubSouthAfrica.com. For more free
photos, visit the image library.)

South African telecommunications provider Telkom has signed a memorandum of understanding with global giant AT&T. The move will seamlessly connect the two networks on the African continent. The partnership is expected to open up new markets and generate new revenue opportunities.

This will benefit African businesses, especially multi-national customers, who will be able to connect more effectively to world markets through the American communications company’s extensive global networks.

The contract is expected to be finalised within five months. September and his US counterpart, Ronald Spears of AT&T Business Solutions, signed the agreement in Johannesburg in mid-April 2009.

“This opportunity is a milestone for AT&T,” added Spears. “Working with Telkom will enable us to extend our world-class IP-based services to sub-Saharan Africa as well as strengthen our ability to serve the needs of customers in the key South African market.”

There were various factors that influenced the Texas-based AT&T’s decision to join forces with Telkom, said September. These included the fact that Telkom is now represented in 35 countries through investments in African service providers such as Africa Online and MWeb Africa; it has strong international connectivity, and has a history of strong enterprise relationship.

The two companies will collaborate in a number of areas, such as the fast-growing mobile telephony market in Africa, security, teleconferencing, virtual private networks, and data and software hosting. Telkom will focus on infrastructure development, while AT&T will bring its range of products and services as well as international connectivity.

The American company expects to gain a stronger foothold in sub-Saharan Africa through its partnership with Telkom, said Spears. The company has similar deals in China and the Middle East, both fast-growing regions.

Spears added that the ever-improving economic situation in many African regions meant that there were an increasing number of clients that need world-class connectivity in order to be competitive.

“Advanced telecommunications networking is a powerful driver of economic growth, prosperity and stability, and an agreement will help progress the availability of and investment in telecommunications services in these countries,” he said.

Telkom, meanwhile, is hoping to target foreign firms that are expanding their operations in Africa.

The company had been restricted, until now, from offering mobile voice products in South Africa and expanding into Africa south of the equator with anything other than fixed-line services. This was the result of a shareholders’ agreement that concerns Telkom’s 50% ownership of mobile services provider Vodacom.

The shareholders’ agreement also affected Vodacom, which was not allowed to offer mobile services in Africa north of the equator. Now the same shareholders have agreed to sell 15% of the company’s stake in Vodacom to the other 50% owner, Vodafone. The deal, said to be worth US$2.5-billion (R22.5-billion), was announced in March 2009 and will give the UK-based company 65% ownership of Vodacom.

Vodacom will be converted to a public company and listed on the main board of the JSE Limited, and Telkom’s remaining 35% stake will be unbundled and distributed to Telkom shareholders. Shareholders will also receive 50% of the after-tax proceeds as a special dividend.

Vodafone’s additional investment in Vodacom is viewed as a strong sign of confidence in South Africa. It is hoped that the deal will boost competition in the telecommunications sector.

In 2004 Thintana announced that it would be reducing its Telkom stake by half, and towards the end of the same year it became known that the management company would pull out of South Africa completely, selling its remaining shares to a government-aligned consortium.

Thintana, having recouped its initial investment with the first sale, would leave South Africa with a healthy profit of $950-million (R8.6-billion).

Trade union Solidarity expressed its outrage at the situation, arguing that not only had thousands of jobs been lost during the five years that Thintana held sway, but also that Thintana, having made its billions, was removing this capital from South Africa. The deal was also widely slammed because it had guaranteed a five-year period of exclusivity for Telkom and effectively stifled any competition.

Spears was confident, however, that the partnership would not be adversely affected by Telkom’s previous relationship with SBC, and that the way is now open for customers to benefit from the expertise that both companies bring to the partnership.