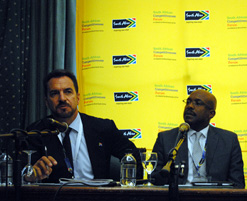 Captains of industry, representatives from the government and civil society, and local and international media gathered at Gallagher Estate in Midrand for the first South African Competitiveness Forum (SACF).

In his welcome speech, Minister in the Presidency: Performance Monitoring and Evaluation Collins Chabane said: “The Competitiveness Forum sets out to inspire not only delegates here today, but each and every South African, to ask themselves: ‘How do I, in my daily environment, help to make my country more competitive?’”

Chichi Maponya, the chairperson of the board of Brand South Africa, said that her team had worked hard to make the forum a reality. “This is the culmination of about a year’s planning to bring together a range of stakeholders from South Africa to begin a conversation about our nation’s competitiveness and reputation. There is a distinct relationship between these two concepts and one directly influences the other.”

She pointed out that the timing of the forum was perfect in that South Africa would celebrate 20 years of democracy in 2014 and that active citizenship on all levels was the key to unlocking a brighter future.

“In order to achieve the national goals of poverty alleviation, job creation and the long-term targets set by the National Development Plan, South Africans must be active participants in the shaping of that destiny,” said Maponya. “For this reason, the South African Competitiveness Forum is an invitation to South Africans to help shape their country’s future through focused contributions to strengthening the nation’s brand positioning, both domestically and internationally.”

Deputy President Kgalema Motlanthe delivered the keynote speech. “As a first of its kind in South Africa, this forum will give leaders from all spheres a platform for debating our country’s competitiveness, as well as arriving at a common understanding of how to improve the competitiveness of our economy,” he said.

He hoped the SACF would harness the collective wisdom of various sector leaders in an effort to meet the quality standards of local and international markets. He acknowledged that South Africa was confronted by the challenges of poverty, inequality and unemployment and said that the improvement in the competitiveness of the nation was proportional to strides in these critical areas. 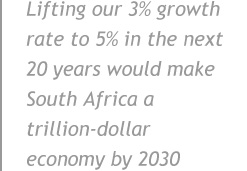 “Simply put, to improve our competitiveness, we need to grow a critical mass of a population that is able to fully participate in their own socio-economic development, thus pulling themselves up by their bootstraps.” The achievement of sustainable competitiveness had never been a more pressing challenge for South Africa.

“We would like to believe that, through social dialogue and a social compact, the South African Competitiveness Forum will be a strategic platform for South Africans to engage reflectively on conditions and issues upon which our development is predicated,” said the deputy president. “This forum is in a good position to contribute to a South Africa that continues to become a better place than it was before 1994.”

Goldman Sachs managing director Colin Coleman gave some insight into the company’s Two Decades of Freedom – 20 Year Review, which was released yesterday, saying that while South Africa was still experiencing many challenges, a lot of progress had been made in two decades of democracy and that bigger “inward investment” was necessary.

“We should be lifting our 3% growth rate to 5% in the next 20 years. That would effectively take our economy to a trillion-dollar economy by around 2030. It would effectively double our [gross domestic product] per capita in that period, halve our unemployment rate and halve our national debt.”

Clearly in the mood to get down to business, Brand South Africa chief executive Miller Matola said he was looking forward to frank conversations about “how we can win together”. He told the audience that “Africa Rising” needed to become a reality. 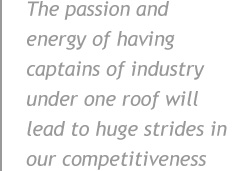 Dr Petrus de Kock, the head of research and development at Brand South Africa, who has been on the SACF roadshow getting input from regional consultations around the country since the official launch in July, explained the process of the plenary breakaway sessions.

“The purpose of today is that you are here for a reason – to identify where the areas are that we need to focus on as a country,” he explained.

The sessions were filled with honest debate in an attempt to first identify problems in the sectors and then to suggest solutions. Matola was thrilled with the outcome of the first SACF, saying the passion and the energy in terms of having the captains of industry under one roof would result in huge strides for South Africa’s competitiveness in the future.

He reiterated what was said earlier on in the day: “South Africa, more than ever, is open for business.”