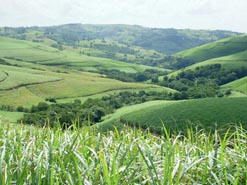 In South Africa sugarcane is mostly grown in
KwaZulu-Natal, with some farming operations
in the Eastern Cape and Mpumalanga provinces.
(Image: South African Sugar Association)

Private investors have injected R1.8-billion (US$200 000) into building a new sugar-processing facility in the rural area of Makhathini, in the far north of KwaZulu-Natal province, Engineering News reports.

The project, which is a joint initiative by the Department of Trade and Industry (DTI), local municipalities and sugar growers, aims to produce ethanol and other sugar by-products from raw sugarcane.

Ethyl alcohol, or ethanol, is an alternative fuel that can be blended with petrol to produce fuel with a higher octane rating and lower harmful emissions. It is produced by fermenting materials that contain starch or sugar.

DTI director for agroprocessing Imamaleng Mothebe said, “The biggest advantage of the project is that it would justify investment in much needed critical infrastructure within one of the least developed regions of the country.

“Once completed, the improved infrastructure in the area should generate more investments in areas other than just sugar. The role of the DTI is to facilitate investment into Makhathini.

“The investment into the project is 100% private-sector funded through development financing institutions, as well as some members of the sugar industry and other private investors,” she added.

Mothebe revealed that state-owned power utility Eskom, which generates 95% of the electricity used in South Africa, was one of the stakeholders in the Makhathini project.

“There is work between Eskom, the Industrial Development Corporation and the Central Energy Fund around issues of cogeneration and ethanol.”

“For South Africa, it is important that an appropriate policy environment be created that would establish real markets for renewable energy products,” he said.

“This will not only improve our overall carbon footprint, but will unlock substantial further investments in the sugar sector.”

The Makhathini sugar-processing facility will be commissioned in 2011 and is estimated to create 1 800 direct jobs.

The South African sugar sector comprises approximately 38 200 registered sugarcane growers farming predominantly in KwaZulu-Natal, with some operations in the provinces of the Eastern Cape and Mpumalanga.

The industry produces an estimated average of 2.3-million tons of sugar per season.

About 60% of this sugar is marketed in the Southern African Customs Union (Sacu), which includes Botswana, Lesotho, Namibia and Swaziland. The remainder is exported to markets elsewhere in Africa, Asia and the Middle East.

Based on revenue generated through sugar sales in the Sacu region as well as world market exports, the South African sugar industry is responsible for generating an estimated average income of R7-billion ($700 000) a year.