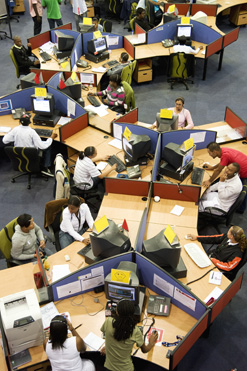 A section of the massive Absa Bank call
centre in Johannesburg. South Africa’s
business efficiency ranking improved
significantly from 38 in 2008 to 30 this
year, overtaking countries such as
mainland China (37) and France (42).
(Image: Chris Kirchhoff,
MediaClubSouthAfrica.com. For more free
photos, visit the image library.)

South Africa has moved up five places in the IMD Business School and Productivity World Competitiveness Yearbook ranking, outperforming a number of developing as well as developed countries to be ranked at 48th place, up from last year’s position of 53.

Each year the global survey sets out to rate 57 countries’ competitiveness in a range of areas, such as infrastructure, business efficiency and government policy.

South Africa’s business efficiency ranking improved significantly from 38 in 2008 to 30 this year, overtaking countries such as mainland China (37) and France (42).

In the economic performance category, South Africa ranked high for its trade and cost-of-living index, but lower for its unemployment rate, particularly for youth and long-term unemployment.

Certain areas of government efficiency also received a good ranking. South Africa was placed at 26th place for the general extent to which government policies are conducive to competitiveness, slightly ahead of countries such as Germany the United Kingdom.

Its infrastructure ranking, which measures the extent to which basic technological, scientific and human resources meet the needs of business, improved from 55 in 2008 to 54 in 2009. South Africa was also ahead of India in this category, which came in at 57th position.

He said South Africa’s infrastructure investment for the 2010 Fifa World Cup gave it a competitive edge over India. “We’ve seen massive developments in many areas such roads, airports and ports.”

In comparison, he pointed out that India’s physical infrastructure such as roads and railways is struggling to keep up with the country’s growth – congestion on roads is still a familiar sight. India’s improvements have been mainly in telecommunications, information technology, research and development and its capacity to generate products.

South Africa could fare even better on its infrastructure ranking in the future if it were to provide faster and cheaper broadband internet access, Mosai said. “Investment is starting to flow in for this. The latest technology is becoming more of a possibility.”

He added that those who move here for jobs are mostly skilled professionals, and that the country is considered to have attractive working conditions, he said. Even though crime is a concern, the South African lifestyle remains pleasant.

Jammine pointed out that the lower cost of living also has the important function of dissuading South Africans from leaving the country. “This could have a positive effect of keeping skills here.”

The services sector in South Africa has also contributed to the country’s growth, Jammine said. “It is quite possible that this is where some of the biggest growth in the economy has occurred.” The country is particularly well known for its good medical and education facilities, he said. Medical tourism, where foreigners come to South Africa for medical procedures while simultaneously taking a holiday, is becoming increasingly popular.

Jammine agreed that employment is a major issue to overcome. Although the growth in the services sector is beneficial for the country, he said it doesn’t create many lower-skilled jobs, where the greatest need is. “But this type of growth is still positive for South Africa.”

He added that foreign asset managers continue showing interest in investing in South Africa. “South Africa is still seen in a positive light,” he said.